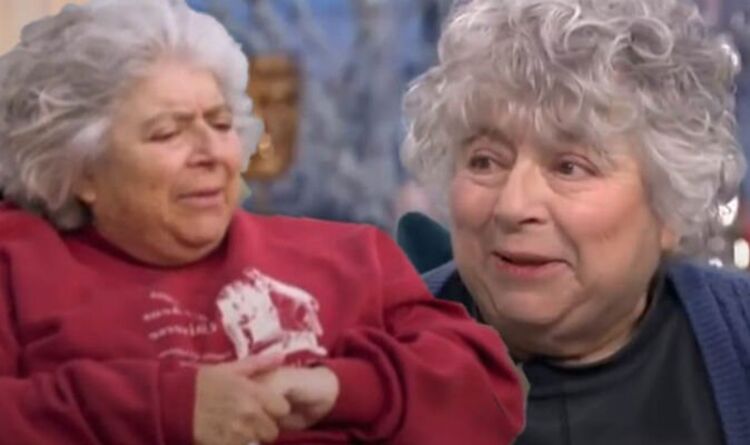 Speaking publicly multiple times about how ageing is affecting her personally, Miriam, who turns 81 this year, has admitted that she feels “death can’t be far away”. The star who shot to prominence in the 1970s for her work as a voice over artist, has gone on to become one of the most loved actresses and TV personalities. She won a BAFTA award for her role in The Age of Innocence and is also recognisable as Professor Sprout in the Harry Potter franchise. But off-screen, thoughts of death and ill health seem to trouble the actress more than most. During the Channel 4 show, Miriam and Alan: Lost in Scotland, which saw Miriam and Alan Cumming travel around Scotland, the actress exposed her more vulnerable side.

In one episode, Alan praised the actress for her “young energy” and “fuddy-duddy ideas” that make up so much of her witty character, but Miriam went on to explain that getting older is not all fun and games.

Miriam replied: “The problem about ageing is that nobody told me that it was going to happen.

“You are supposed to find out yourself and you do, and it’s b* awful.

“It’s horrible not being able to run for a bus.

“At night I think, will I wake up in the morning? And then I do.

“Nearly every night I think maybe tonight is the night I won’t wake up.”

The star said that the fearful feeling makes her feel “miserable” until she wakes up in the morning to go about her day.

For Miriam, these fears are not totally unnecessary. Her beloved father Joseph passed away after suffering with Alzheimer’s, and caring for him has made her worry about getting the condition herself.

The actress added: “It is worrying. Anybody who has had any experience of looking after someone with Alzheimer’s, seeing them gradually disappear from you.

In addition to fears of Alzheimer’s, back in 2016 the star had to have a knee replacement due to her crippling osteoarthritis.

Speaking about the condition and how surgery has helped her with Health Awareness, Miriam said: “It limits you and diminishes you. It’s been more of a struggle to remain me than I thought it would be.

“One aspect I’m experiencing now is the problem of working in the theatre with arthritis pain. I have an energetic role in ‘The Lady in the Van’ and it’s only possible because the stage management help me to climb in and out. If they didn’t, I couldn’t fulfil my role.

“My knee replacement was in May 2016. It is a tremendous success. I have very little, occasional twinges. I have good movement. The only thing I can’t do is go downstairs in an ordinary way – it has to be one at a time. Upstairs I can manage. It’s opened up my life (despite back pain) and now the other knee is asking to be done.”

The World Health Organization explains that ageing results from the impact of the accumulation of a wide variety of molecular and cellular damage over time. This leads to a gradual decrease in physical and mental capacity, a growing risk of disease and ultimately death.

Common conditions in older age include hearing loss, cataracts and refractive errors, back and neck pain and osteoarthritis, chronic obstructive pulmonary disease, diabetes, depression and dementia. As people age, they are more likely to experience several conditions at the same time.

Versus Arthritis explains that in a healthy joint there is a smooth yet slippery covering of cartilage that helps bones move freely against each other. However, as osteoarthritis develops, part of this cartilage thins and becomes rougher, meaning that the joints cannot move as smoothly together as they should. As the body tries to repair this damage, it can lead to joint structures changing, contributing to symptoms.

Dementia is a term used to describe a collection of symptoms that occur when certain diseases or conditions affect the brain. Alzheimer’s is the most common type of dementia in the UK and can cause symptoms such as:

In order to try and age “better” and to avoid any nasty health conditions, Age UK provides the 10 tips for ageing. These include: