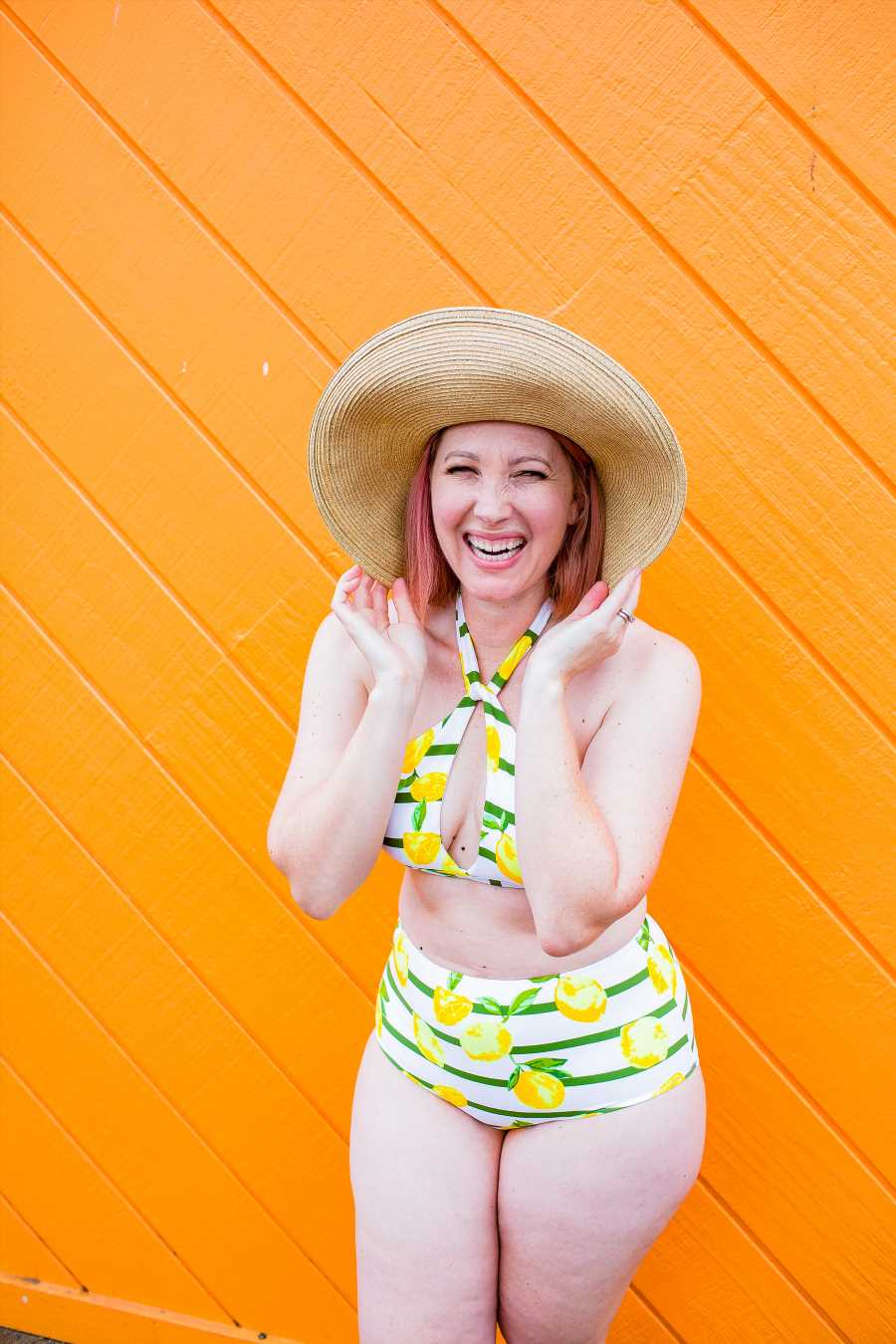 Carly Anderson wore a swimsuit exactly three times between when her daughter Lydia was born and her third birthday. “When someone had a pool party, I’d say we were busy,” Anderson tells PEOPLE. “I have been insecure about my body for my entire life.”

Now though, the Los Angeles-based mom blogger and elementary school teacher has 87 swimsuits — and flaunts them regularly.

Creator of #JustWeartheSuit, Anderson hoped the hashtag would foster a body-positive community by encouraging her Instagram followers to post photos of themselves in bathing suits. While her lifestyle blog Lipgloss and Crayons had long been about being a fashionable mom, she wanted to have a greater impact.

“I wanted to build something that wasn’t just about Lydia and I,” says Anderson, 39. “I wanted it to be more of a place where everybody could participate and be part of the conversation. My goal was for any woman who wanted to talk about this to use the hashtag and connect with other women.”

Anderson says it was the 15 years she spent teaching elementary school that made her realize how much pressure women put on themselves — from a very young age.

“Seeing the evolution in these girls between kindergarten and when they go off to middle school is something that’s been on my mind since I started teaching,” she says.

“Five-year-olds start off extremely confident and talk about how beautiful they are and how much they love taking their school photos.” But then, something changes: “The fifth-grade girls have tons of body image issues and insecurities, and you can see how society has gotten in their heads.”

“This is something that all women struggle with,” she says. “We look at ourselves with this limiting belief that people care about the size of our thighs.”

Still, it took Anderson years of blogging to confront her own body fears. She describes the “uncomfortable accident” in 2017.

“I was talking off the cuff on my Instagram story about how I encourage female empowerment and being confident, but how I always avoided bathing suits. And jokingly, I said, ‘I should just take photos in a bathing suit and do a blog post. Because if the Internet has seen them, I am not going to care about going to the pool up the street in our neighborhood!’ “

Over the next few days, she says, she got hundreds of messages from followers not only encouraging her to do  it — but imploring her.

So that summer, she took swimsuit photos by the pool in a friend’s backyard. The experience was surprisingly emotional for her. “I cried,” she says. “I was so uncomfortable; it was a difficult thing for me to do.”

So difficult, in fact, that she sat on the photos for a month. Finally she posted them in a candid blog post — and her followers loved it. “So many women were saying, ‘Thank you, this is how I feel, too.’ “

In 2018 she wanted to take it even further. “I started to brainstorm what I could do to make this more of a community,” she says, explaining how she came up with #JustWeartheSuit. “It was terrifying because I had to ask other people to do this thing that made me uncomfortable. I thought, no one is going to say yes to this!”

But to her surprise, participation took off. “It’s the craziest thing I have ever seen!” she says of the women reclaiming their confidence by posting swimsuit photos of their own. “The thing that really inspires me is regular women posting vacation photos with their kids. And these women say, ‘Hey, normally I would have taken a photo of just the kids,’ or, ‘I would have thrown on a shirt before I took this photo.’ That makes me so happy. Because to me, this is about showing our kids that we don’t need to be insecure.”

And while Lydia, now 5, was always a major inspiration, Anderson sees the movement as much bigger than any one mother-daughter duo. “This isn’t just about my own daughter and me as a parent, this is about grownup women being role models for any kids in their lives,” she says. “My goal is for women to step outside themselves and realize these insecurities may have come from society or outside sources, but we’re the ones allowing them to live in our heads.”

And she’s been doing it all with the support of her husband Robert. “I think at first he was like, ‘Wait, what? You’re going to put yourself in a bathing suit on the internet?’ ” Anderson says, laughing. “But he’s seen what this has done for me personally and what it’s done for our daughter. I am so much more confident being a role model for her.”

Looking ahead, Anderson hopes to organize in-person #JustWearTheSuit events to foster real-life connections. “I have these visions of women on a beach somewhere, all de-robing together and having that moment where they’re all wearing bathing suits,” she says.

In the meantime, Lydia is loving her mom’s new perspective. Anderson recalls a recent shoot at Santa Monica Pier in L.A.: “Lydia looked at me and said, ‘Mom, you look so pretty. I love your bathing suit.’ And I realized she doesn’t care how big my thighs are or if I have cellulite. She cares about us playing at the beach together, that’s all.”

While that was just one brief moment, Anderson is confident that this experience will stick with her daughter for years to come.

“I want her to remember: “Whatever size my mom was or her friends were, I thought they were beautiful and they did what they wanted to do — it didn’t stop them from living their lives.”