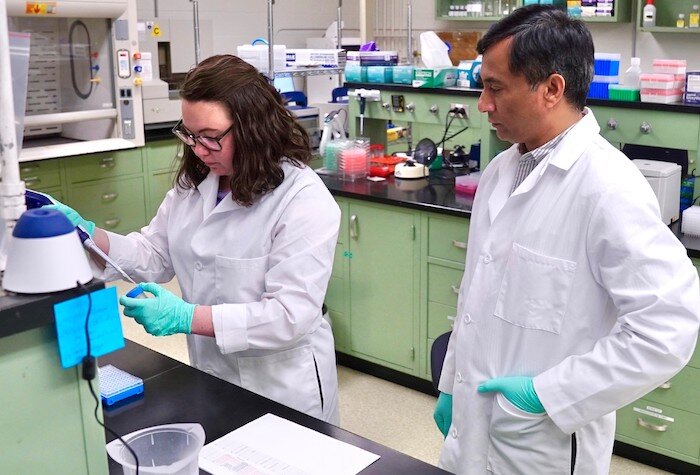 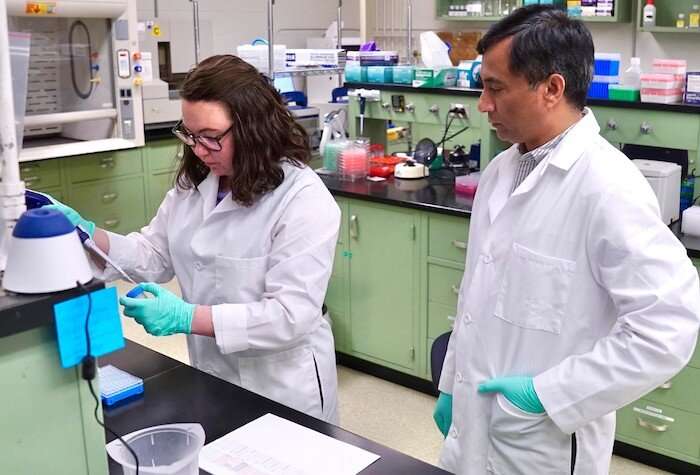 A study from the University of Kansas recently published in the peer-reviewed journal Brain Sciences identifies a new gene target related to specific language impairment (SLI).

The discovery of BUD13 for future biological investigation of language acquisition holds potential for researchers to better diagnose and understand the communication disorder.

SLI slows development of language skills in children who don’t have any clear intellectual, sensory, neurological or emotional deficits. While the causes of SLI still are unknown, researchers in the field believe genetic factors play a key role. According to the most recent research in the field, 10% of kindergarteners in the United States have SLI.

“SLI is a neurodevelopmental disorder that normally appears in children when they start their language acquisition,” said co-author M. Hashim Raza, assistant professor with the Life Span Institute and the Child Language Doctoral Program in the College of Liberal Arts & Sciences at KU. “It can be hard to identify these children, but they might face problems speaking and learning grammar and not be very talkative—but they’re otherwise typical children. If we talk about their nonverbal IQ level, they fall into the in-the-average range, and sometimes we see their nonverbal IQ level is even higher than in average people.”

Because SLI can be challenging to diagnose, researchers have sought to find biological markers that could lead to earlier treatment and intervention for children with the impairment.

“It’s not very easy to identify such individuals,” Raza said. “They really have to go through a lot of assessments—but if there was some kind of genetic marker then we could discover this problem at a very early stage in life and design interventions to reduce complexity of this disorder. This problem persists throughout their lives. As they grow up, we have seen these individuals face social and relationship problems, and difficulty succeeding in careers. So this problem can persist well into adulthood. But it can be manageable in the beginning if these individuals are identified and diagnosed.”

Raza’s study in Brain Sciences focused on a single family (dubbed “family 489”) with 10 children, seven of whom have SLI. The family is part of a larger ongoing longitudinal study of individuals with SLI and their family members led by KU’s Fred & Virginia Merrill Distinguished Professor of Advanced Studies, Mabel Rice, and her Language Acquisition Studies Lab in collaboration with Raza and his Laboratory of Human Molecular Genetics.

“We use something called a ‘family-based study’ because in family studies we don’t need thousands of individuals,” Raza said. “We call them informative families so that we can conclude our genetic findings based on how many people in these families are affected and unaffected. We used next-generation sequencing methods and bioinformatic tools to focus on potentially pathogenic and co-segregating rare genetic variants in our starting family at the base level. Once a potential gene target is identified, we sequence the whole gene in other individuals with SLI to confirm the pathogenicity.”

Andres, a GRA in Raza’s lab, used these sequencing methods to investigate SLI in family 489. The results implicated the new gene target, BUD13, for future biological investigation of language acquisition.

The KU researcher said studies using a family-based approach, such as the one in this research effort, are relatively rare in the literature, although the genetic relationships within extended families add unique power to the study.

The rare BUD13 variant, changing the arginine amino acid to glutamine, observed in family 489, is predicted to be damaging by multiple computational models. The co-segregation of the variants in the affected family members prompted follow-up analysis of the gene in other SLI cases.

Next, the researchers sequenced the coding regions in 175 other individuals with SLI from Rice’s larger study to confirm a role of BUD13 in the communication disorder.

“The individuals in the longitudinal investigation also were comprehensively behaviorally assessed with multiple measures of nonverbal intelligence, language, reading and nonverbal memory,” Raza said. “The study used precise criteria to define SLI status, including children as probands if they had low standardized omnibus language scores, but excluding children with low nonverbal IQ scores.”

The delayed yet similar trajectory of language development in children with SLI compared to their age-matched, typically developing peers supported the epigenetic hypotheses developed by Rice—specifically, that regulatory genes and epigenetic factors are involved in SLI expression during early development. The new gene target, BUD13, could support these hypotheses as the BUD13 protein processes RNA and creates a diversity of proteins from the same gene in a tissue-specific manner, affecting other genes’ fate. The BUD13 finding supports the power of a family-based approach in investigating complex behavioral traits, like SLI.

According to the KU researchers, additional support for BUD13 as a gene target for language acquisition comes from evidence from two other recent studies: 1) a large deletion spanning BUD13 was observed in an individual with a neurodevelopmental disorder (Servetti et al., 2021); and 2) an animal model with a loss of function mutation in BUD13 showed a severe neuronal phenotype, suggesting BUD13 has a role in neuronal functions (Fernandez et al., 2018).