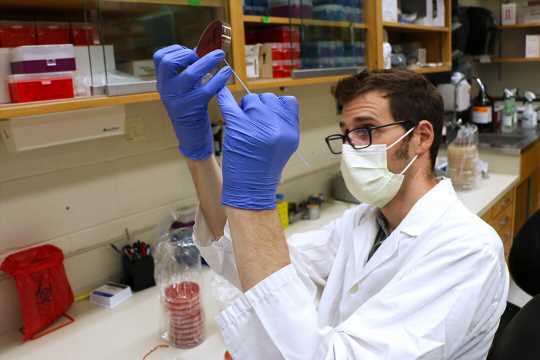 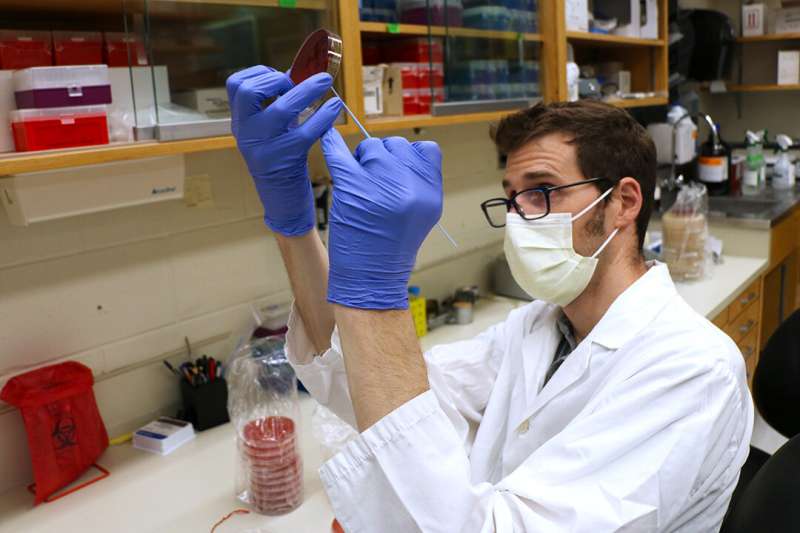 A team of University of Saskatchewan (USask) researchers have cracked a multi-species mystery, documenting the flow of a common canine pathogen from a dog to a human.

This finding, published in the Journal of Chemotherapy, is the first documented, symptomatic urinary tract infection (UTI) in a human patient caused by transmission of Staphylococcus pseudintermedius bacteria from a dog.

Led by Dr. Joseph Blondeau (Ph.D.) of the USask College of Medicine and Dr. Joe Rubin (DVM, Ph.D.) of the Western College of Veterinary Medicine (WCVM), this collaborative effort involved taking samples from both a pet and its owner to find the source of infection.

UTI infections can be caused by a range of different bacteria, but the most common and best-known cause in both people and dogs is Escherichia coli (E. coli). This is the first time that S. pseudintermedius was found to cause a UTI in a human patient.

“S. pseudintermedius has probably been causing infections in people for a really long time, but it just wasn’t identified because the laboratory techniques were insufficiently discriminatory,” said Rubin, a veterinary microbiologist at the veterinary college.

“The reason it’s interesting is because this organism is really associated with dogs. Finding it in a person indicates that there’s probably been transmission from a dog into a person.”

In this specific case, an elderly male patient reported several UTIs over the course of several months. The patient, who had recurrent UTIs, was also regularly performing self-catheterization to treat bladder dysfunction.

When S. pseudintermedius was isolated from his infection, the diagnostic laboratory at Royal University Hospital (RUH) alerted Blondeau, who is head of clinical microbiology at the Saskatoon hospital.

Blondeau, Rubin and Leah Blondeau, a Ph.D. candidate who was lead author on the publication, have an ongoing diagnostic project dedicated to identifying S. pseudintermedius transmission between animals and people.

The bacteria commonly lives in dogs without causing problems, and researchers have only begun to investigate how S. pseudintermedius could affect humans. Improvements in diagnostic technologies over the past decade have opened doors for scientists to rapidly and inexpensively identify the types of bacteria that cause infections.

After Blondeau was alerted to the case, the research team followed up to ask if the patient had a pet. He did, and they began their work, visiting the 77-year-old patient at his home. Rubin collected oral and rectal swabs from the man’s dog, then cultured the sample in the lab and found a matching strain of S. pseudintermedius.

Since the human patient had been spending several hours per day training his dog, the researchers suspect that the patient’s hands were contaminated with the bacteria before performing his self-catheterization procedure.

The findings were important to the team from both research and clinical perspectives.

“When you’re an investigator—and we’ve been investigators for decades here—it’s always nice to put this new information into the literature,” said Blondeau.

“But you know, our research is somewhat clinical in nature because it’s designed to try and help with some aspects of treatment or identification. It’s probably more important for that reason than any other reason. It provides useful information that can help doctors when they see these types of bugs in patients.”

The USask research team has previously published three reports of S. pseudintermedius infections, and in all three cases, there was clear evidence of transmission from the family pet. Beyond documenting these occurrences and providing important clinical information, the study also reinforces that humans share microbes with whatever other creatures live around us.

“It highlights the biology. It highlights that we all share organisms and that we have transmission within households. We have very intimate contact with our pets,” said Rubin.

“They’re eating in our kitchen, they’re off and on our furniture, they’re licking our face, they’re sleeping in our bed. Most people don’t have closer contact with anyone other than a spouse. There’s a lot of really prime opportunities for transmission.”

Instead of a scary specter, Rubin said it’s time to view zoonotic disease as just part of the human experience. Animals are not out to “get us” with bacteria and viruses, but rather, it’s biology at play here.

“What we’ve really been able to do with these collaborations is shed light on the biology and highlight how … there’s a recognition that this is normal, and this is expected,” he said.

It’s also important to remember that the benefits of animal-human interactions often outweigh the risk of illness, adds Blondeau.