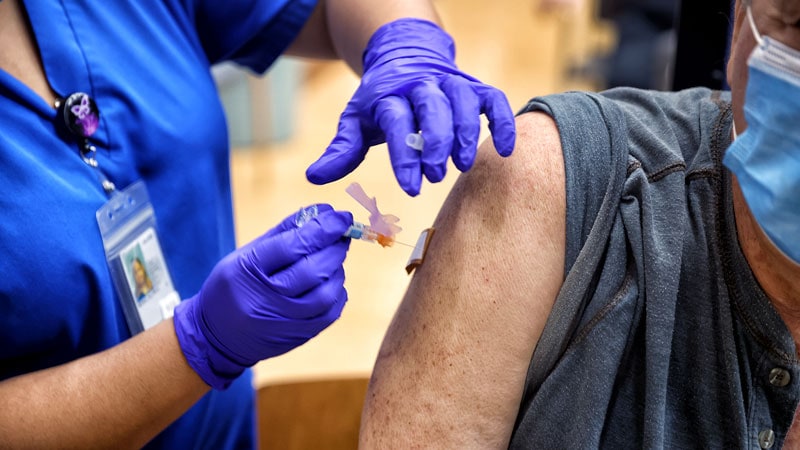 Many people with inflammatory bowel disease (IBD) can mount a strong antibody response to a booster shot of an mRNA COVID-19 vaccine, including those who were unable to respond fully to an initial two-dose vaccine series, new evidence suggests.

Of the study participants, 93% had detectable antibodies after their initial vaccination series, which increased to 99.5% following an additional dose.

“Most IBD patients, including those who are immune suppressed and/or did not have detectable humoral immune responses following the initial mRNA COVID-19 vaccine series, demonstrate strong immune responses to additional doses of mRNA vaccines,” Michael Kappelman, MD, MPH, a pediatric gastroenterologist at the University of North Carolina at Chapel Hill, told Medscape Medical News.

“These data support an additional vaccine dose of mRNA vaccine in patients at risk for an inadequate response to the initial series,” he said.

Kappelman presented these findings on behalf of the PREVENT-COVID Study Group as an e-poster at the European Crohn’s and Colitis Organisation (ECCO) 2022 Congress.

For people with Crohn’s disease or ulcerative colitis who are taking immunosuppressants, boosters are generally recommended, Kappelman and colleagues note. However, “real-world data on the effectiveness and safety of additional vaccine doses are lacking.”

Participants completed baseline and follow-up surveys. Their blood work was obtained and evaluated 8 weeks after completion of the initial vaccine series and 6 weeks after a booster to measure anti–receptor binding domain IgG antibody levels specific to SARS-CoV-2.

Of the 47 patients without initial antibody response, 45 (96%) had detectable antibodies following an additional dose.

“These data can be used to inform vaccine decisions in patients with a broad array of immune-medicated conditions frequently managed by immunosuppression,” the investigators note.

“This abstract [gives us] an important understanding about how patients with inflammatory bowel disease respond to COVID-19 vaccination. There have been mixed reports in the prior studies regarding how well patients with IBD respond to vaccination,” Jason Ken Hou, MD, said when asked to comment on the research.

The main findings that 99.5% of patients had detectable antibodies after an additional dose “is reassuring, as prior studies have suggested some patients did not develop antibodies after the [initial series],” added Hou, who is an associate professor of medicine-gastroenterology at Baylor College of Medicine in Houston.

The researchers conducted the study within a previously established, well-known internet-based cohort of IBD patients, Hou said. Although the iresearchers collected information on the IBD medications that patients were taking at the time of vaccination, the analyses that were presented did not compare antibody response rates based on medication.

“Further study is still required, as there is more to vaccination response than detectable antibody alone,” he added.

Damian McNamara is a staff journalist based in Miami. He covers a wide range of medical specialties, including infectious diseases, gastroenterology, and critical care. Follow Damian on Twitter: @MedReporter.