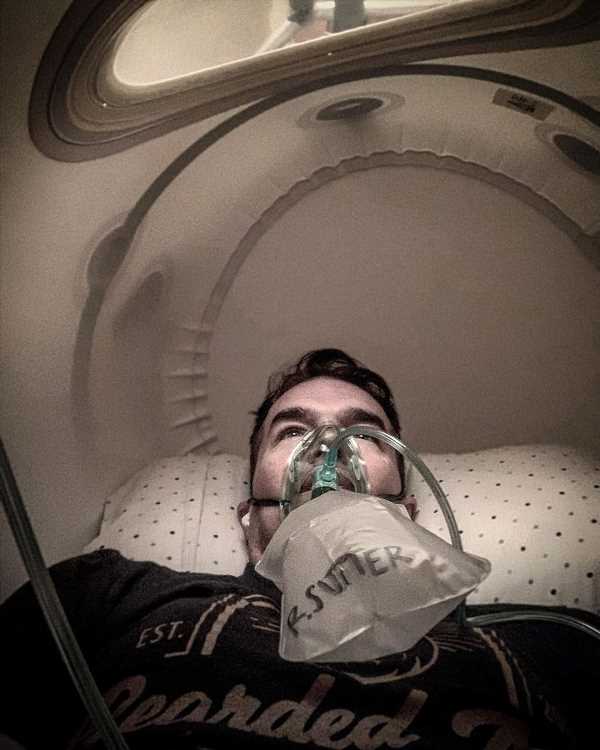 Ryan Sutter is doing what he can to repair his body after more than a year of dealing with a mysterious health issue.

The former Bachelorette winner, 46, spent "a little quiet time" in a hyperbaric chamber on Thursday and said he's working on "healing." Sutter shared a photo from inside the oxygen chamber, which has increased air pressure that can help repair injured body tissue and fight infections, according to Michigan Health. In the shot, he's lying down with an oxygen mask strapped to his face.

Sutter's wife of 17 years, Trista, first shared in November that Ryan had been "struggling for months" with his health. Ryan, a firefighter, explained a month later that his symptoms first started in Feb. 2020 after he completed an 18-week training course with the Denver Fire Department.

"It's been five months now and, if anything, I feel worse," he wrote on Instagram. "Though I am functional and continue to work my regular fire schedule, I am experiencing a battery of symptoms which include: fatigue — sometimes almost paralyzing, deep body and muscle aches, fevers, night sweats, full body itching with no rash, headaches, neck and throat swelling, congestion, light headedness, nausea, and just general all around not feeling good."

Ryan said that he was tested repeatedly for COVID-19 but they came back negative, and blood tests and a CT scan weren't able to explain his health issues.

In the new year, though, the dad of two has started to see some improvements, both physically and mentally. On Feb. 23, Ryan shared a photo from his gym, and excitedly announced that he's been able to work out again.

"Doing my best to get back to my best," he captioned the photo.

And Ryan is also learning to accept that "some days you just have to write off…" as his body recuperates.