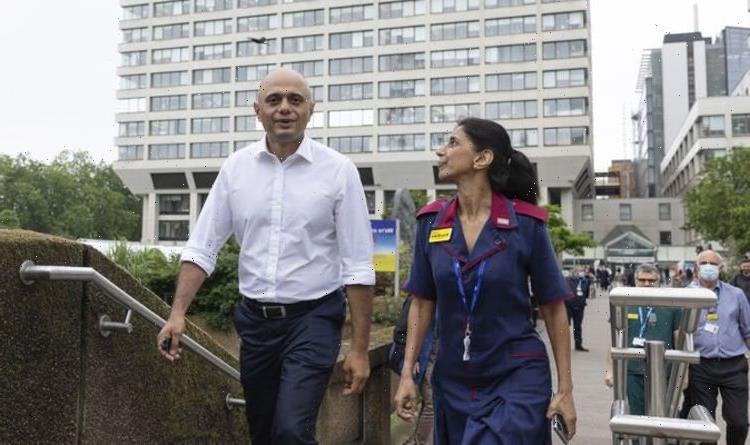 The Health Secretary said easing the rules will help cut the huge NHS backlog, with 5.3 million patients waiting to start planned treatment. Some experts criticised the decision to lift curbs on July 19, saying measures should not be eased while case numbers are rising sharply. Mr Javid said: “Removing restrictions is not without risk, I accept that. But keeping restrictions is not without cost. “The restrictions have led to increased child abuse, domestic violence, mental health issues, undiagnosed cancer.

“As we start lifting restrictions it means that we can better deal with all these major non-Covid health problems.”

Acknowledging that he had taken on the role of Health Secretary at a pivotal time, he told MPs in the Commons: “I have three pressing priorities for these critical few months.

“First, getting us on the path out of this pandemic. Second, busting the backlog of non-Covid services. And third, putting social care on a sustainable footing for the future.

Proposals…Sajid “I want to draw on what I’ve learnt during this time of adversity, what we’ve all learnt together, and I want to make this great nation a healthier and a fairer place.”

Mr Javid said repeated lockdowns and measures to halt the spread of Covid had also led to “considerable pressure on the NHS”.

He added: “One of the things we can look forward to as we gradually start removing restrictions is helping people with their many non-Covid health problems too.”

Some 36,660 cases were confirmed across the UK yesterday, the highest figure since January 22.

There were 50 deaths linked to the virus, the highest daily figure reported since April 9.

The Health Secretary faced questions about the impact of easing restrictions on vulnerable shielding patients, who may be terrified of going out in public when others are no longer required to wear masks.

Charity Blood Cancer UK has particularly criticised the lack of support for those with compromised immune systems, for whom vaccines may not work.

Mr Javid said: “There will be a number of people that understandably will be concerned about the move away from regulations to more guidance. But there has to come a point where we have to start removing the restrictions slowly, in a measured way, as we are.

“Not least because we want to be able to start dealing much more with all the non-Covid health problems that have been created as well.”

Mr Javid also promised to bring forward a “full plan” to reform adult social care this year, after Labour accused the Government of not keeping its word on the issue.

He told the Commons: “It is worth repeating that Government is absolutely committed to coming forward with a sustainable plan for adult social care and bringing that plan forward to make sure that every person when they reach old age in our country can have the dignity that they deserve. We will bring forward full proposals, a full plan, this year.”

Some scientists have supported the decision to ease restrictions on Monday, but others have warned the move could prove disastrous.

David Nabarro, a World Health Organisation special envoy on Covid, said it was “too early to be talking about massive relaxation or freedom” despite the UK’s rapid vaccine rollout.

He said the pandemic was “advancing ferociously around the world”, adding: “I don’t think we’ve anywhere near got through the worst of it.”

Asked about the Government’s decision to switch from regulations to personal responsibility, he said: “All this doesn’t quite fit with the position that was taken by Britain, along with other nations, some months ago.

“What does urging caution mean? It’s important that everybody knows the best possible advice on how to prevent themselves being infected. I accept that vaccination has changed the nature of the equation in the UK.

“But quite honestly from any point of view, it’s too early to be talking about massive relaxation or freedom when the outbreak curve is on such a sharp ascent.Yes, relax, but don’t have these mixed messages about what’s going on.

“This dangerous virus hasn’t gone away. Its variants are coming back and are threatening those who have been vaccinated. We have to take it seriously.” The British Medical Association branded the decision to lift restrictions “irresponsible and perilous”.

BMA council chair Dr Chaand Nagpaul accused the Government of “reneging on its own promise to be led by data and impact on the NHS”.

He said: “We do not accept that there is no good time to ease restrictions further.

“Scrapping the remaining restrictions next week will give this deadly virus an opportunity to retighten its grip.”

Professor Calum Semple, a member of the Scientific Advisory Group for Emergencies, said the UK was in for a “miserable” winter due to a mixture of Covid and other respiratory viruses.

Prof Semple added: “It’s the people that are not vaccinated that are still coming to harm.”