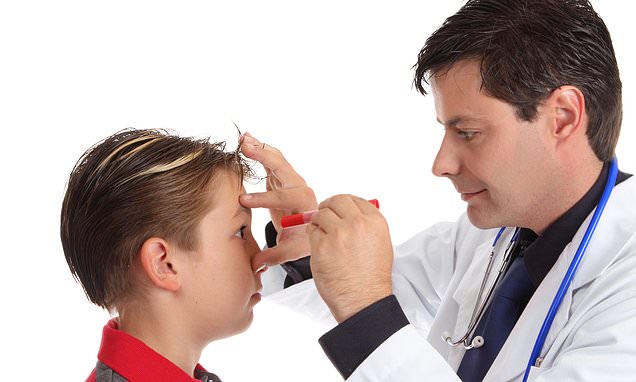 A routine eye test at the OPTICIANS could diagnose children with autism, study suggests

A simple eye test at the opticians could diagnose children with autism, a study suggests.

US researchers found the eyes of youngsters with the condition respond more slowly when exposed to bright light.

Their pupils took longer to constrict and return to their original size.

Researchers hope the finding will pave the way for a ‘quick and easy’ way to diagnose autism – which is often a lengthy and stressful experience for families.

They believe the delayed response time is a sign that nerves in the brain are not functioning at full capacity.

A faster diagnosis can lead to earlier interventions that can make the difference between a child with autism being able to talk or not in the future.

Autism and related conditions such as Asperger’s affect around one in 100 British children and one in 44 American youngsters.

The condition is notoriously difficult to diagnose because there is no medical test, meaning doctors have to rely on the child’s developmental history and behaviour.

As such, children in the US are normally only officially diagnosed at age four, while in the UK the average age is six. 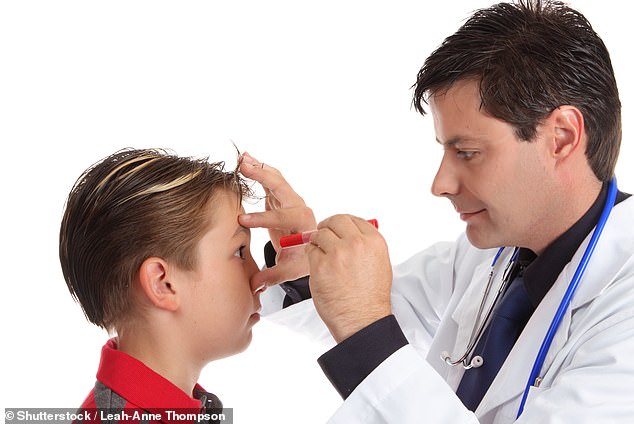 A simple eye test could unlock a speedy way to diagnose autism in children. US experts found children with condition had a delayed response in the way their pupils respond to direct light, similar to that used in an opticians (stock image)

Lead research Georgina Lynch, an assistant professor at Washington State University, said: ‘We know that when we intervene as early as ages 18 to 24 months it has a long-term impact on their outcomes.

‘Intervening during that critical window could be the difference between a child acquiring verbal speech and staying nonverbal.

‘Yet, after 20 years of trying we still have not changed the average age of diagnosis here in the U.S., which is four years old.’

Signs of autism in young children include:

Signs of autism in older children include:

Common signs of autism in adults include:

The research team tested the eyes of 60 children between the age of six and 17-years-old.

Of these children, 36 had been previously diagnosed with autism while the remainder served as controls.

Scientists used a handheld device called a pupillometer that emits a bright light and is available at most opticians.

They test children’s eyes one at a time, measuring the pupillary light reflex, a scientific term for how quickly the pupil of the eye changes shape in response to bright light.

Analysing their results, they found children with autism had a significantly delayed reflex response time compared to the controls with eyes taking longer to react and also longer to return to normal.

Professor Lynch, an expert in speech and hearing, believes the delayed response time is a sign the cranial nerves in the brain – which control speech at language – are faulty.

‘The pupillary light reflex tests the integrity of that system, so it seemed logical to try this very simple, noninvasive measure to determine whether there were differences between typical development and autism,’ she added.

The findings are published in the journal Neurological Sciences.

Professor Lynch said the team are working on a new study on a group of 300 two-to-four-year-olds.

This study will enable them to pin down on the exact benchmarks for the delayed response that could identify a child with autism.

Autism refers to a broad range of conditions characterized by challenges with social skills, repetitive behaviours, speech and non-verbal communication.

Families are often forced to attend multiple hospital appointments and have children put through several psychological tests to get a diagnosis.

While drugs can be given to control symptoms such as aggression or hyperactivity, there is no cure.

Affected children can find it hard to make eye contact, understand how others feel, or have a keen interest in certain topics.

Autistic youngsters may also take longer to get their head around information or repeat things.