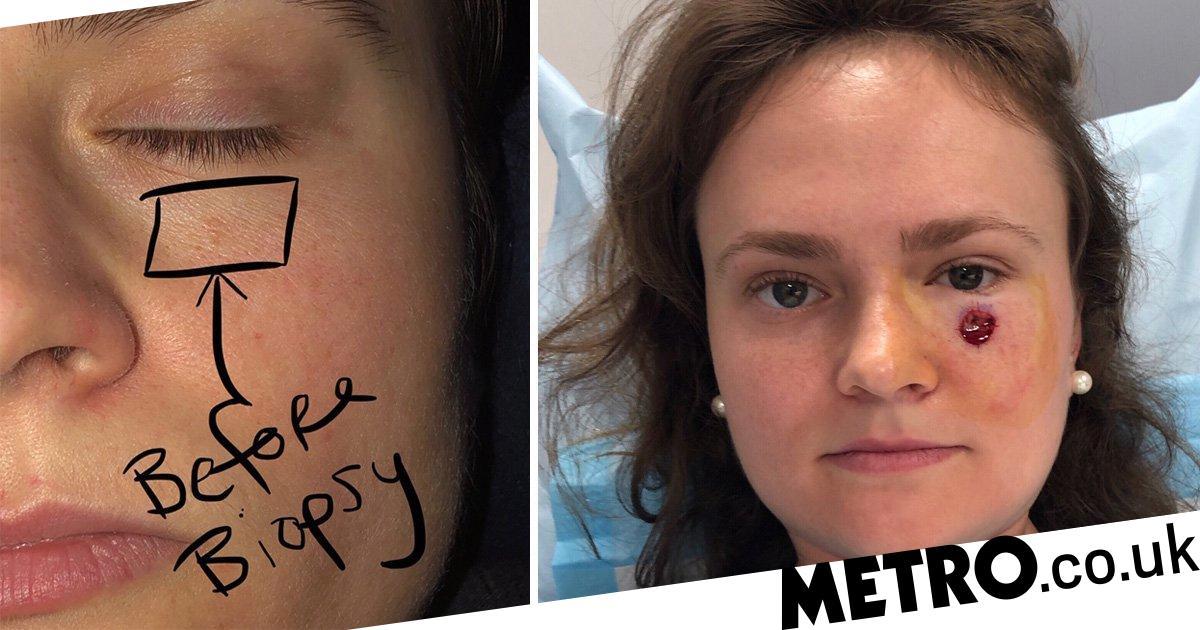 Gibson Miller’s story is an important reminder to keep an eye on any unusual marks and spots on your skin.

Gibson, a 24-year-old teacher, noticed a light pink spot under her left eye back in August 2018.

She assumed it was a pimple, but when months later it hadn’t disappeared, Gibson went to her dermatologist, who ordered a biopsy as the mark was asymmetrical.

It turned out that the ‘spot’ was actually a basel cell carcinoma (BCC); the most common form of skin cancer.

A BCC is a type of skin cancer that occurs in the basal cell, the cell that produces new skin cells when old cells die. It usually appears as a light pink or red bump on the skin – so you can see how one would be easily mistaken for a blemish.

After being diagnosed, Gibson looked back at old photos and realised she’d had the mark under her eye for three years before she noticed it.

A few months later the teacher had Mohs surgery, in which layers of cancerous skin are removed, followed by reconstructive surgery around her eye.

Getting a basel cell carcinoma around the eye area is common, as it’s a spot loads of us miss out when applying sunscreen.

Gibson says she started playing tennis when she was nine, and so spent hours outside without a hat or sunglasses. She used sunscreen, but not regularly.

Thankfully her scar is starting to heal, and the experience has made her realise the importance of protecting her skin.

She now always wears sunglasses or a hat when she goes outdoors, and covers her face and ears with sunblock.

‘People say: “Sunscreen smells bad” or “I don’t want to be seen wearing it”,’ Gibson told the Daily Mail.

‘But sunscreen is sexy; it’s responsible.’