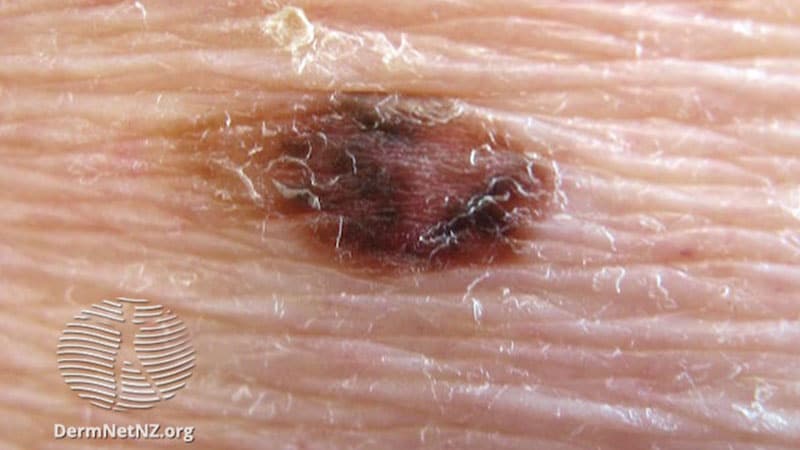 INDIANAPOLIS – Among children and adolescents diagnosed with melanoma, females had higher rates of superficial spreading disease, while males were more frequently affected by nodular melanoma.

In addition, male gender was independently associated with increased mortality, but age was not.

Those are key findings from a retrospective cohort analysis of nearly 5,000 records from the National Cancer Database.

“There are multiple studies from primarily adult populations showing females with melanoma have a different presentation and better outcomes than males,” co-first author Rebecca M. Thiede, MD, a dermatologist at the University of Arizona, Tucson, said in an interview with this news organization in advance of the annual meeting of the Society for Pediatric Dermatology, where the abstract was presented during a poster session.

“However, because melanoma is so rare in younger patients, little is known about gender differences in presentation and survival in pediatric and adolescent patients. To our knowledge, this is one of the largest studies to date in this population, and the first to explore gender differences in detail in pediatric and adolescent patients with melanoma.”

When the researchers adjusted for confounding variables, male gender was independently associated with an increased risk of death (adjusted hazard ratio 1.37; P < .001), but age was not.

“It was particularly surprising to see that even at such a young age, there is a significant difference in overall survival between males and females, where females have better outcomes than males,” Thiede said. “When examining pediatric and adolescent patients, it is essential to maintain cutaneous melanoma on the differential,” she advised. “It is important for clinicians to perform a thorough exam at annual visits particularly for those at high risk for melanoma to catch this rare but potentially devastating diagnosis.”

She acknowledged certain limitations of the study, including its reliance on one database, “as comparing multiple databases would strengthen the conclusions,” she said. “There was some missing data present in our dataset, and a large percentage of the histologic subtypes were unspecified, both of which are common issues with cancer registries. An additional limitation is related to the low death rates in adolescent and pediatric patients, which may impact the analysis related to survival and independent predictors of survival.”

Asked to comment on the study results, Carrie C. Coughlin, MD, who directs the section of pediatric dermatology Washington University/St. Louis Children’s Hospital, said that the finding that males were more likely to present with stage II or higher disease compared with females “could be related to their finding that females had more superficial spreading melanomas, whereas males had more nodular melanoma.” Those differences “could influence how providers evaluate melanocytic lesions in children,” she added.

Coughlin, who directs the pediatric dermatology fellowship at Washington University/St. Louis Children’s Hospital, said it was “interesting” that the authors found no association between older age and an increased risk of death. “It would be helpful to have more data about melanoma subtype, including information about Spitz or Spitzoid melanomas,” she said. “Also, knowing the distribution of melanoma across the age categories could provide more insight into their data.”

Dahak received an award from the National Cancer Institute to fund travel for presentation of this study at the SPD meeting. No other financial conflicts were reported by the researchers. Coughlin is on the board of the Pediatric Dermatology Research Alliance (PeDRA) and the International Immunosuppression and Transplant Skin Cancer Collaborative.