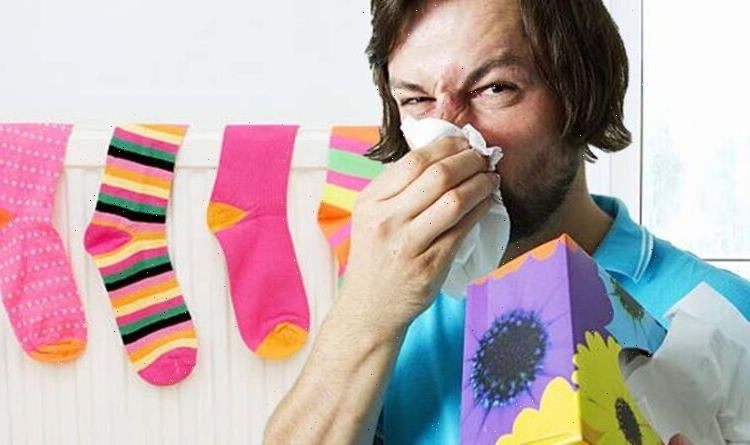 Natalie Cassidy shows off the impact of her hay fever

Doctor Anushka Patchava, Deputy Chief Medical Officer at Vitality has outlined several tips for managing symptoms. She explained that hay fever is more common than people might imagine, with a quarter of the population experiencing symptoms. The doc said: “This is as much as 13 million people in the UK. Symptoms can include itchy eyes and throat, sneezing and a runny or blocked nose.”

MANY people have hay fever, and some remedies can help. There are also certain tips, such as bringing your washing inside, which may help reduce hay fever symptoms.

She continued: “As with many other allergies, the key to managing hay fever symptoms is avoiding exposure to the triggering allergens.

“When the pollen count is high for instance, people with hay fever can take steps such as shutting windows, avoiding buying fresh flowers, washing your clothes often to remove pollen, and cleaning your pets to remove any pollen stuck in their fur.

“If you suffer from asthma, it is advised that you take particular care during the warmer months, as pollen is known to worsen or even trigger asthma.”

Nonetheless, the doc noted there is no silver bullet. She said: “While there is no known ‘cure’ for hay fever, many people use over-the-counter medications to manage symptoms.”

She explained: “These may include nasal sprays, antihistamines and eye drops. All of these can help with alleviating symptoms, and can be accessed via your local pharmacist, who can help you to decide which medication is the best option for you.

“It is important to read instructions that come with the medicine and listen to the advice from your pharmacist or doctor. This is especially crucial if you’re taking other medications or have other health conditions.”

“Make a note of the times when your symptoms are at their worst, so you can take preventative measures. Tree pollen tends to be released between March and April, grass pollen between May and July, and weed pollen between June and August.”

Doctor Anushka said: “On warm dry days when the pollen count is at its peak, you can avoid worsening your symptoms by taking a shower when you get home.

“Washing your hair thoroughly and putting on a fresh set of clothes will remove any residual pollen and lower the risk of irritation.

“If you struggle with itchy eyes, over-the-counter eye drops may also help relieve these symptoms.”

She also recommended that people avoid hanging your washing outside as this will allow pollen to stick to your clothes and may cause a reaction when you wear them.

The doctor said: “If you need to dry your clothes outside, avoid morning and evenings as this is when the pollen count is at its highest during the day. Drying your clothes inside will prevent pollen from sticking to your clothes.”

She added: “While it can be tempting to keep your windows and doors open to allow fresh air inside, this should be minimised as it allows pollen to enter the home and will further aggravate symptoms.

“Keep them closed as much as possible to stop the pollen coming indoors. Some may find having an air humidifier in their living room or bedroom useful too.”

The NHS says hay fever is usually worse between late March and September, especially when it’s warm, humid and windy. This is when the pollen count is at its highest.

The health body says symptoms of hay fever include:

It explains: “Hay fever is an allergic reaction to pollen, typically when it comes into contact with your mouth, nose, eyes and throat. Pollen is a fine powder from plants.”