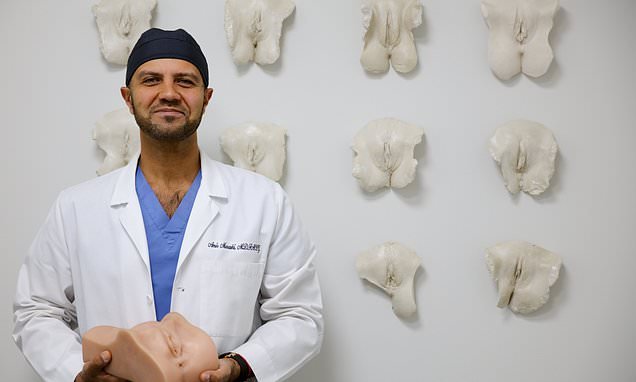 Meet the Vagina Whisperer: Inside the clinic of star New York gynecologist who creates ‘perfect vaginas’ – complete with molds of his creations lining the walls

The so-called Vagina Whisperer, Dr Amir Marashi, sits in a swivel chair with a wall of white, porcelain plaster-cast vaginas behind him.

These are some of his masterpieces, impressions of the vaginoplasties he has earned a reputation for over the past decade.

In front of him: half a dozen pink-flesh-colored plastic ‘medical’ models scattered across his desk, a model of a uterus, and a $400 pink suede box of white roses.

For patients coming into his small but storied Brooklyn Heights clinic for a consultation, it’s like a ‘look book’ that you would flip through in a hair salon.

According to the latest figures available from the American Society for Aesthetic Plastic Surgery, the number of US women getting vaginoplasties – specifically, those that shorten the lips of the vagina – has soared more than 217 percent over the last five years.

Dr Marashi, a gynecologist and minimally invasive surgeon from Iran, earned a reputation for his skill with repairing and tweaking vaginas during his stint with a non-profit in Haiti in 2010 after the devastating earthquake.

Now back in New York, he sees around 200 patients a year of all ages, some to fix botched procedures or mutilations, some for a ‘tighter look,’ some to fix naturally oversized and uncomfortable vaginal lips.

DailyMail.com went behind the scenes of one of his procedures with one of his more typical cases: an 18-year-old college student coming in for a cosmetic lift. 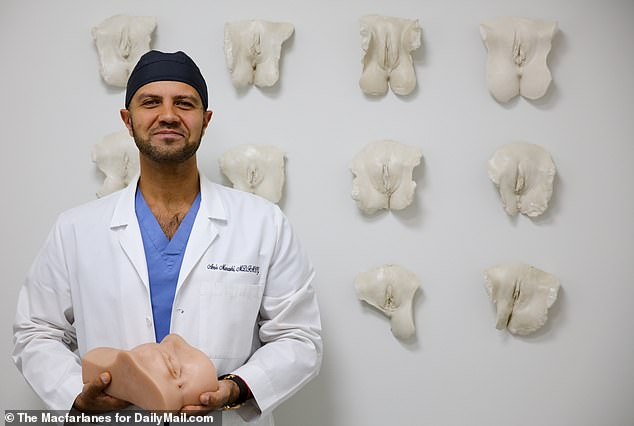 New York-based gynecologist Dr Amir Marashi (pictured) took DailyMail.com behind the scenes of one of the several labiaplasties he performs every year 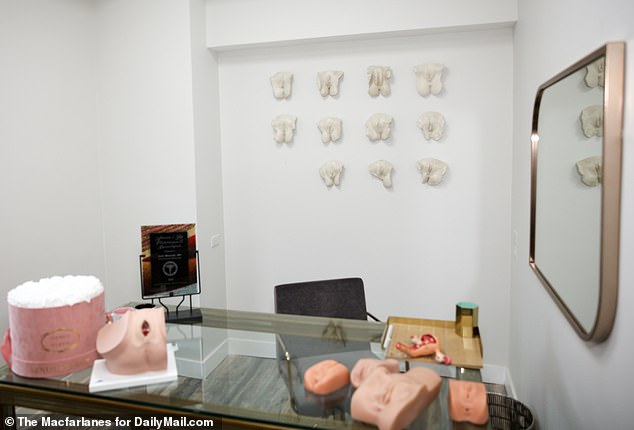 Figures show more than 10,700 women undergo the surgery in the US annually – a more than 200 percent increase from 2012. Pictured: Dr Marashi’s office

Nicole (who asked that we not use her last name) said she wanted the procedure more for appearance than anything else.

‘Over the years, I found things [felt] wrong,’ she told DailyMail.com before her operation at The Brooklyn Hospital Center, where Dr Marashi performs all of his surgeries, 20 minutes from his office.

‘[The labia] would get stuck in lace underwear, it would just be in the way or I’d have to move it over all the time and it was just ridiculous.’

The length of the inner lips of her vagina made her too uncomfortable to have sex or even have a boyfriend.

About four years ago, at 14, Nicole discovered the labiaplasty procedure while doing research online.

‘I was a little scared then. I didn’t want to do it. I was like: “Eh, whatever, it’s not that necessary”,’ she said. ‘Then it started bothering me again.’

In the summer of 2017, Nicole visited her gynecologist, who recommended her to Dr Marashi. 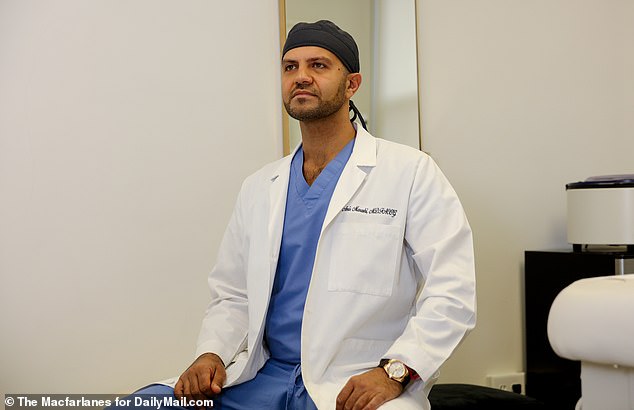 Dr Marashi (pictured) says he performs about 200 vaginal surgeries a year – both for cosmetic and functional purposes. It’s about a 900 percent increase from the 20 he did in 2011 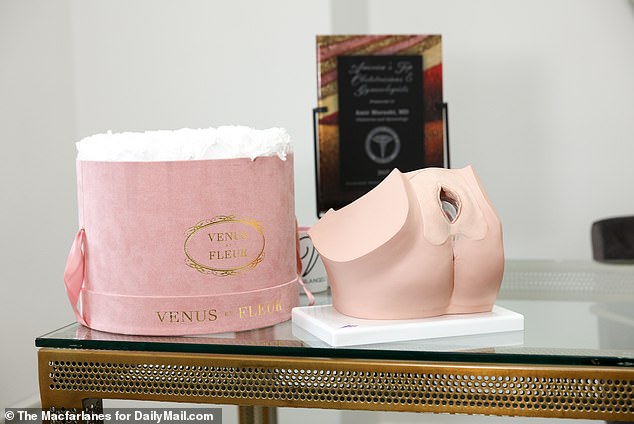 One his patients, Nicole, an 18-year-college student told DailyMail.com that she had the procedure because her enlarged labia made her too uncomfortable to have a boyfriend or even have sex. Pictured: A vaginal mold in Dr Marashi’s office

Trained in his native Iran as a gynecologist, Dr Marashi knew he wanted to perform vaginoplasties, but didn’t realize he would specialize it.

Dr Marashi’s work in this field began while he was in Haiti in 2010, with the legions of other volunteer medics who had flown to the island to provide free care.

WHAT IS A VAGINOPLASTY?

Most vaginoplasty operations are done by private clinics as cosmetic surgery to change the appearance of the female genitals.

Occasionally, there may be a medical need for the operation such correcting congenital defects to the vagina, urethra and rectum.

It is usually performed by a gynecologist or plastic surgeon.

It can be carried out using either a general anesthetic or local anesthetic with sedation, and procedures usually take about one to two hours.

According to the most recent figures from the American Society for Aesthetic Plastic Surgery, more than 5,000 women underwent vaginoplasties in 2013.

No figures have been released since then aside from the fact that the percentage has risen each year.

There was a woman he was treating who was suffering from a vaginal fistula – when a hole develops between the vagina and either the bladder or the rectum – but had been too ashamed to talk about it.

According to Dr Marashi, one of the nurses who was in the operating room with him commented on his work: ‘Wow, I can’t believe it, you’re some kind of vagina whisperer.’

The nickname, of course, got repeated and passed around to his nurses back in New York, and it stuck.

But in 2013, there was something of a sea change in vaginal cosmetic procedures, Dr Marashi says – something he attributes to three main factors.

‘First, it’s a less of a taboo subject and being talked about more,’ he said.

Now, he performs around 200 a year and counting, most of which are cosmetic, with around a third of patients coming in for corrections for botched procedures.

‘[Women] have it done in South America, in the Caribbean, someone in the Dominican Republic is doing it for $700,’ he said.

‘The more you do it, the better you get, and because people haven’t demanded it so much, doctors haven’t practiced it much or get trained for it.

‘They cut too much of the tissue away – what I call a labial amputation – or they make the clitoris numb.’

Dr Marashi hopes he soon will have a legion of doctors able to perform the procedure just as well as him, as he starts taking on OBGYN residents from Brooklyn Hospital to do a surgical rotation with him.

‘We need to have a voice in the American College of Surgeons about cosmetic gynecology,’ he said.

‘In 10 years, people will be doing these surgeries [more regularly], but we need to establish training so doctors don’t make the same mistakes we did to figure it out.’ 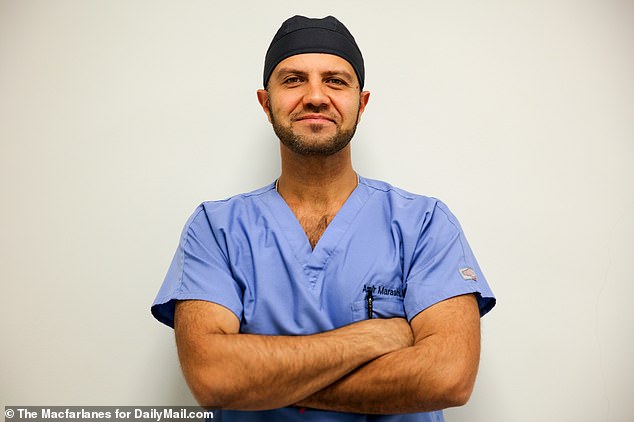 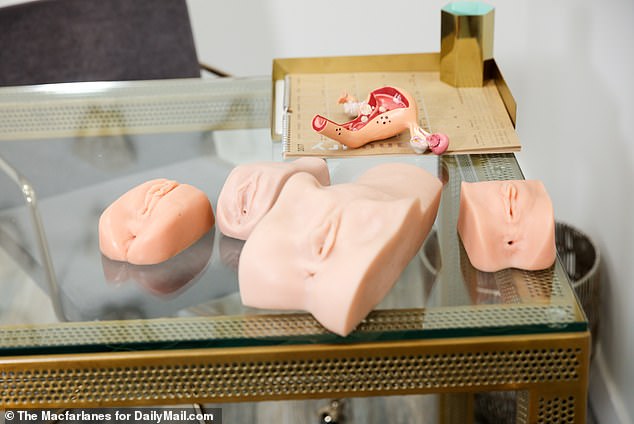 During a labiaplasty, Dr Marashi starts by exposing the vagina near the edge of the operating table, a plastic bag is underneath to catch any blood.

The sections that he will be cutting are outlined with a blue marker.

Next, an incision is made into the soft tissue before the skin to minimize bleeding.

Dr Marashi says he ‘measures twice, cuts once’ to limit the amount of bloodshed and reduce the need for deep stitches.

Then he cauterizes the tissue, which is a medical technique that burns off a part to mitigate bleeding.

Finally, the soft tissue and the skin are closed up with dissoluble sutures.

But Dr Marashi insists all his patients go home happy.

Indeed, Nicole said she was ‘delighted’ with the results – and her mother has referred a bunch of new clients to Dr Marashi.

Patients go home the same day and, for the next four to six weeks, are not to put anything in or around the vagina.

That means no tight clothing, no tampons, no douching and no sex.

Dr Marashi has his patients come in for their first follow-up two weeks after the procedure and their next follow-up between four to six weeks after.

After three months, swelling should have subsided, and that’s when he usually shows before-and-after pictures.

That, too, is when he performs the plaster cast – a project started last year after he was approached by a German artist. At first, the idea sounded a bit bizarre, but Dr Marashi was delighted with the results, and is now excited to deck his wall out with his creations.

It is a messy process, but a worthwhile one, he says.

The patients are allowed to take theirs home if they wish.

For women who are considering having the procedure done, Dr Marashi offered some tips: