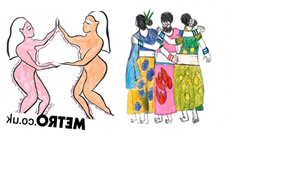 Even if you’re not celebrating Valentine’s Day on February 14, you should definitely still be showing up for Galentine’s Day – which is today.

And what better way to honour the ladies in your life (single or not) than to send them a card which helps destitute people?

These e-cards will go to a special lady in your life and the proceeds support women’s projects in Barishal, Bangladesh, one of the most disaster-prone areas in the world.

Organised by the British Red Cross as part of the #ItStartswithHer campaign, each hand-drawn card celebrates the power of strong female friendships.

A few celebs have even got involved in the appeal and created their own designs.

You can also buy e-cards drawn by the women in Bangladesh who form the Women’s Squad community groups specially set up by the Red Cross.

Each card costs £2.30 but of course, you can send more than one.

In case you need a bit more convincing, £2.30 could help pay for an educational session on topics like gender-based violence and menstrual hygiene.

And £10 could help pay for a mentor to develop their business skills.

Also as part of the series, fashion photographer Rosie Matheson (who has previously shot for Nike and Adidas) took pictures of the Woman’s Squad to show who the e-cards would be helping.

The campaign is supporting marginalised women in slum communities in Basishal who deal with the many challenges including poverty and child marriage, to deadly cyclones and flooding.

The British Red Cross started their #ItStartsWithHer campaign in January and encouraged women to donate their unwanted clothes.

All the money being raised by selling the clothes at Red Cross shops is being doubled by the UK government (until April).

And another host of celebrities has donated their old goods including Amanda Holden, Anita Rani, and Michelle Keegan.

So kick off your Galentine’s celebration by spreading some good in the world.

‘An Arm and a Leg’: How to Avoid a Big Bill for Your COVID Test