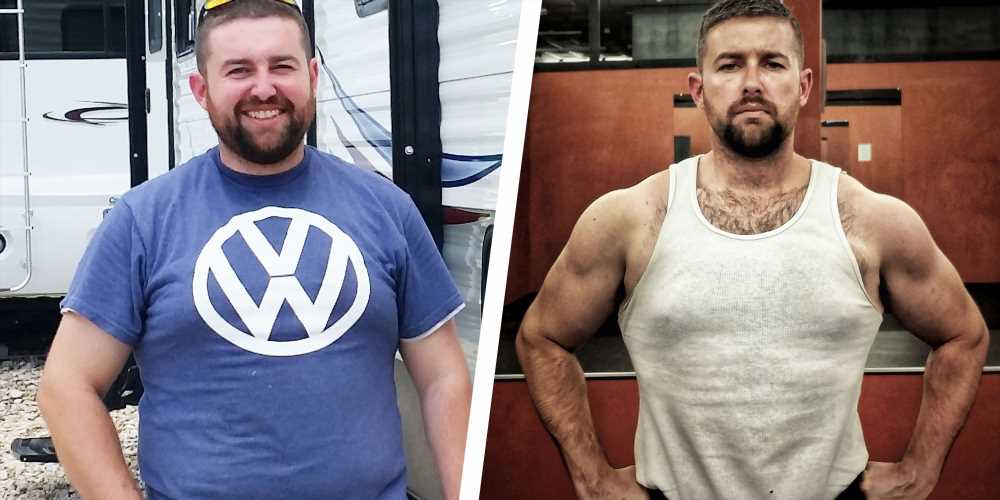 Brandon Reid always felt like “the fat kid.” The 35-year-old Texan, now a general manager for a battery company, finished college weighing 325 pounds. He dropped 145 pounds to enlist in the Marine Corps, and for most of his enlistment he weighed about 165. But he says he was “skinny fat,” and once he left the Corps he settled into a sedentary life and started to gain weight again.

Some of it was mental—feeling depressed and without a place in the world. One day he saw a picture of himself at 230 pounds. “I was embarrassed by how I looked, and wanted to look and feel better for not only myself,” he says, “but I wanted to make my wife proud of me.”

He didn’t work with a trainer, but left his options open for experimentation. He watched YouTube videos, read books, and talked to fellow gym-goers. “I vary my routines based on what I feel I need to focus on,” Reid says. “I’ve done push pull splits, bro splits, front back splits—you name it.” He threw himself into the project, hitting the gym five days a week for 45 minutes of cardio followed by a light circuit of weightlifting. He found himself dreading the cardio, so dropped it to focus solely on weights. Skipping cardio he hated helped his motivation, and he found that he could still trim fat by altering his diet.

Reid was just as experimental with his diet, trying everything from intermittent fasting to calorie counting to macros and keto. When he plateaued at 190 pounds, he started following the advice of Vince “The Iron Guru” Gironda: an 8×8 training program with a steak and eggs diet. In two months, he’s dropped from 190 to 165 but kept his muscle. “I feel great,” he says, “and am looking forward to stripping away the body fat I have left, so I can see what’s underneath.”

“My transformation has been purposely slow,” he says. He’s been at it for three years now, building muscle while slowly trimming the fat—he’s lost a total of 65 pounds.

“I don’t have a specific goal in mind,” Reid says, “I just keep trying to sculpt a better version of myself than I was yesterday.” What started out as a plan to get fit and healthy has become a way of life for him. “I couldn’t imagine ever stopping weight training,” he says. He’s stronger and more confident, sleeps and overall just feels better; he’s even gotten over his acid reflux problem. 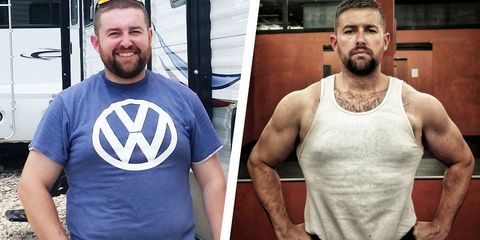 Like a lot of people, he’s realized that his diet was the most important element of getting healthy. You cannot outwork a bad diet, he says. And it can take some time to find the diet and gym routine that works for you. “Don’t be afraid to experiment,” he says. “Also, don’t worry what other people think. Even the smallest or fattest guy in the gym is lapping the guy at home on the couch.”