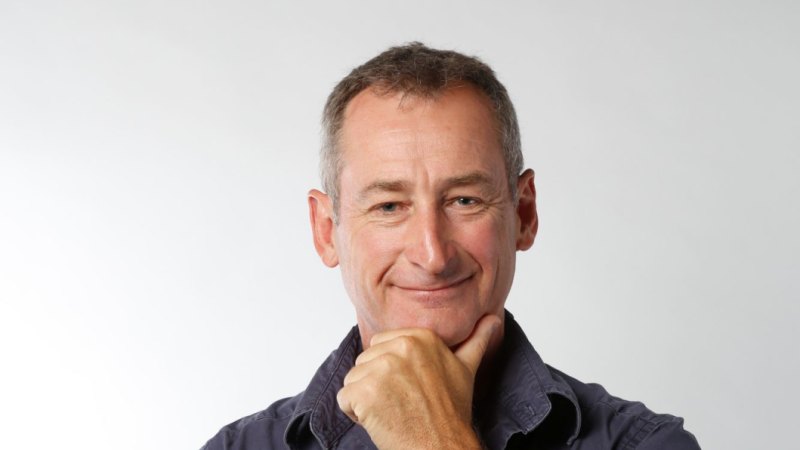 A hero is sold a suit of clothes that make him invincible. He dons the suit and goes to meet his nemesis, whose adolescent sidekick picks up a gun and fires a shot through the suit and the hero’s heart. The hero’s widow goes back to the suit-maker demanding a refund only to be told, ‘‘That suit was for medieval weapons, knives and axes. Didn’t you read the label? That suit made you invincible in 1283. He didn’t go to a gunfight in that thing, did he?’’

I had put on my body armour by having a flu shot and was gunned down by a bemused virus, just mutated, barely out of microbiological nappies, a wannabe flu, one of those pretenders who talk like Tony Soprano while stacking pyramids of tomato cans on Aldi shelves. I can’t even tell people I’ve got the flu without Sarah saying, ‘‘Hogwash. He had a flu shot. He’s been laid low by flu’s shelf-stacker nephew.’’ 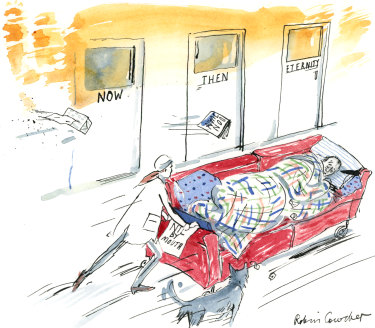 I spent a week on a sofa in semi-darkness, annoyed by external stimulus and outraged to learn helicopters hover over my house for hours every day. The TV slid past too fast for easy comprehension. I was supposed to read Don Juan for a masterclass, but my tiredness of mind made it preferable to close my eyes and mark time in the halfway house between consciousness and sleep.

You can only do this when you’re sick. Sickness is a long stopover in this mental fogland you usually pass through fleetingly on the way to sleep. My week in semi-coma opened up an inner terrain of the past.

Contemporary events receded and the historical became immediate. In this netherworld Trump’s tweets were unimportant, but my girlfriend seen in the school gym laughing at the jokes of a guy cool enough to wear a scarf was a massive worry. After a brief charade of moral deliberation I went back to 1978 and killed him with a single blow. This retreat from the present to the past while you’re ill is a mini version of what they say you go through at death – your whole life flashing before your eyes.

If you were commanded to lie in a crepuscular room for days on end without external stimulus and just think; muse, remember, imagine, wander, create, worry, exult, what would you come up with? We’ve all experienced enough love, defeat, loneliness, success, smelt enough smells, feasted widely enough, travelled to enough exotic places, read enough books and seen enough movies to have plenty of mental landscape at our disposal to fill a week, lying there, not asleep, not really awake.

But by the end of my week I had begun to reimagine the same scenarios time after time. And this made me wonder how I was going to face eternity, if the religious are on the money and eternity’s my lot.

If you replay any experience enough times it becomes banal, it befalls to drudgery. Your first kiss with that girl in that dark pub in that foreign city, your index finger laid along her smooth jawline … that kiss could never be anything but the bewildering epiphany it was. A moment so beautiful it hurts that you can’t live it forever. Until you try. Until you play it ad-damned-nauseum.

That’s the nature of eternity. Beauty cannot be. It is extinguished. All mountains are ground flat. All heavens need be mercilessly looped. And all hells. You have a finite collection of memories to paper eternity. You walk down that repetitively muralled and mirrored corridor toting only the tat your life bestowed. Let’s say Folau’s right and the fire awaits me. So what? Certain bacteria live in extreme heat. If you are in hell you have become this bacteria. You are Brer Rabbit in his briar patch. Hell is home and fire is air.

The afterlife must be boring. Fire or virgins, they become tepid and banal. That’s what it is to be stuck in eternity, I guess; time being endless makes everything meaningless. You are sentenced to more. More of your life, as it gets duller with every telling.

In eternity you will weep. Weep until your tears are banal and weep some more. And ‘‘more’’ doesn’t even mean anything when you’re immersed in eternity. More signifies no more than ‘‘less’’. Measure doesn’t apply with no time. After a week in bed I repudiated eternity. I realised I’m too boring to spend eternity with. So are you.