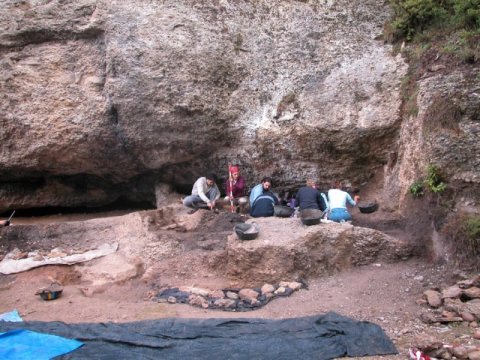 An international team of researchers have analyzed ancient DNA from almost 300 individuals from the Iberian Peninsula, spanning more than 12,000 years, in two studies published today in Current Biology and Science. The first study looked at hunter-gatherers and early farmers living in Iberia between 13,000 and 6000 years ago. The second looked at individuals from the region during all time periods over the last 8000 years. Together, the two papers greatly increase our knowledge about the population history of this unique region.

The Iberian Peninsula has long been thought of as an outlier in the population history of Europe, due to its unique climate and position on the far western edge of the continent. During the last Ice Age, Iberia remained relatively warm, allowing plants and animals — and possibly people — who were forced to retreat from much of the rest of Europe to continue living there. Similarly, over the last 8000 years, Iberia’s geographic location, rugged terrain, position on the Mediterranean coast and proximity to North Africa made it unique in comparison to other parts of Europe in its interactions with other regions. Two new studies, published concurrently in Current Biology and Science, analyze a total of almost 300 individuals who lived from about 13,000 to 400 years ago to give unprecedented clarity on the unique population history of the Iberian Peninsula.

For the paper in Current Biology, led by researchers at the Max Planck Institute for the Science of Human History, researchers analyzed 11 hunter-gatherers and Neolithic individuals from Iberia. The oldest newly analyzed individuals are approximately 12,000 years old and were recovered from Balma Guilanyà in Spain.

Earlier evidence had shown that, after the end of the last Ice Age, western and central Europe were dominated by hunter-gatherers with ancestry associated with an approximately 14,000-year-old individual from Villabruna, Italy. Italy is thought to have been a potential refuge for humans during the last Ice Age, like Iberia. The Villabruna-related ancestry largely replaced earlier ancestry in western and central Europe related to 19,000-15,000-year-old individuals associated with what is known as the Magdalenian cultural complex.

Interestingly, the findings of the current study show that both lineages were present in Iberian individuals dating back as far as 19,000 years ago. “We can confirm the survival of an additional Paleolithic lineage that dates back to the Late Ice Age in Iberia,” says Wolfgang Haak of the Max Planck Institute for the Science of Human History, senior author of the study. “This confirms the role of the Iberian Peninsula as a refuge during the Last Glacial Maximum, not only for fauna and flora but also for human populations.”

“The hunter-gatherers from the Iberian Peninsula carry a mix of two older types of genetic ancestry: one that dates back to the Last Glacial Maximum and was once maximized in individuals attributed to Magdalenian culture and another one that is found everywhere in western and central Europe and had replaced the Magdalenian lineage during the Early Holocene everywhere except the Iberian Peninsula,” explains Vanessa Villalba-Mouco of the Max Planck Institute for the Science of Human History, first author of the study.

The researchers hope that ongoing efforts to decipher the genetic structure of late hunter-gatherer groups across Europe will help to even better understand Europe’s past and, in particular, the assimilation of a Neolithic way of life brought about by expanding farmers from the Near East during the Holocene.

The paper published in Science focuses on slightly later time periods, and traces the population history of Iberia over the last 8000 years by analyzing ancient DNA from a huge number of individuals. The study, led by Harvard Medical School and the Broad Institute and including Haak and Villalba-Mouco, analyzed 271 ancient Iberians from the Mesolithic, Neolithic, Copper Age, Bronze Age, Iron Age and historical periods. The large number of individuals allowed the team to make more detailed inferences about each time period than previously possible.

The researchers found that during the transition to a sedentary farming life-style, hunter-gatherers in Iberia contributed subtly to the genetic make-up of newly arriving farmers from the Near East. “We can see that there must have been local mixture as the Iberian farmers also carry this dual signature of hunter-gatherer ancestry unique to Iberia,” explains Villalba-Mouco.

Between about 2500-2000 BC, the researchers observed the replacement of 40% of Iberia’s ancestry and nearly 100% of its Y-chromosomes by people with ancestry from the Pontic Steppe, a region in what is today Ukraine and Russia. Interestingly, the findings show that in the Iron Age, “Steppe ancestry” had spread not only into Indo-European-speaking regions of Iberia but also into non-Indo-European-speaking ones, such as the region inhabited by the Basque. The researchers’ analysis suggests that present-day Basques most closely resemble a typical Iberian Iron Age population, including the influx of “Steppe ancestry,” but that they were not affected by subsequent genetic contributions that affected the rest of Iberia. This suggests that Basque speakers were equally affected genetically as other groups by the arrival of Steppe populations, but retained their language in any case. It was only after that time that they became relatively isolated genetically from the rest of the Iberian Peninsula.

Additionally, the researchers looked at historical periods, including times when Greek and later Roman settlements existed in Iberia. The researchers found that beginning at least in the Roman period, the ancestry of the peninsula was transformed by gene flow from North Africa and the eastern Mediterranean. They found that Greek and Roman settlements tended to be quite multiethnic, with individuals from the central and eastern Mediterranean and North Africa as well as locals, and that these interactions had lasting demographic as well as cultural impacts.

“Beyond the specific insights about Iberia, this study serves as a model for how a high-resolution ancient DNA transect continuing into historical periods can be used to provide a detailed description of the formation of present-day populations,” explains Haak. “We hope that future use of similar strategies will provide equally valuable insights in other regions of the world.”