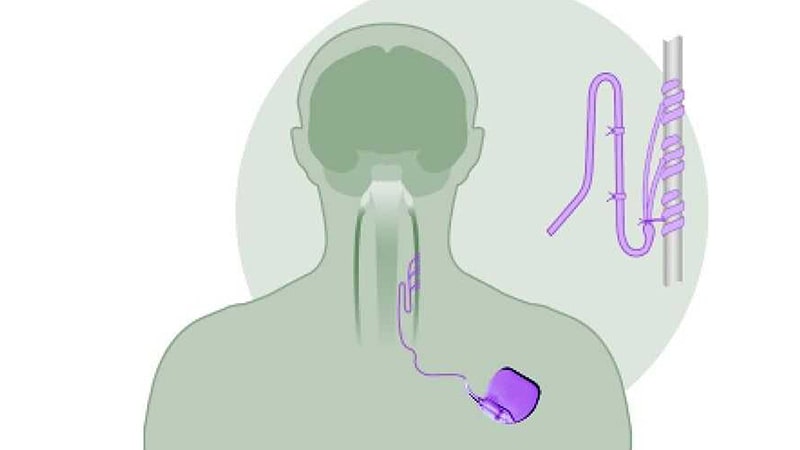 Standard therapies for depression are antidepressants and psychotherapy. In particularly severe cases, electroconvulsive therapy (ECT) or vagus nerve stimulation (VNS) may also be indicated. VNS is an approved, effective, well-tolerated, long-term therapy for chronic and therapy-resistant depression, write Christine Reif-Leonhardt, MD, and her team of researchers from the University Hospital Frankfurt am Main, Germany, in a recent journal article. In contrast to more common treatments, such as ECT, VNS is little known in the general population and among specialists. The cost of VNS is covered by health insurance funds in Germany.

As the authors report, invasive VNS was approved in the European Union in 1994 and in the United States in 1997 for the treatment of children with medicinal therapy–refractory epilepsy. Because positive and lasting effects on mood could be seen in adults after around 3 months of VNS, irrespective of the effectiveness of anticonvulsive medication, “a genuinely antidepressant effect of VNS [was] postulated,” and therefore it was further developed as an antidepressant therapy.

According to Reif-Leonhardt and her colleagues, there have been multiple studies and case series on VNS in patients with therapy-resistant depression in the past 20 years. Many of the studies highlighted the additional benefits of VNS as an adjuvant procedure, but they were observational studies. Sham-controlled studies are in short supply because of methodologic difficulties and ethical problems.

The largest long-term study is a registry study in which 494 patients with therapy-resistant depression received the combination of the usual antidepressant therapy and VNS. The study lasted 5 years; 301 patients served as a control group and received the usual therapy. The cumulative response to the therapy (68% vs 41%) and the remission rate (43% vs 26%) were significantly greater in the group that received VNS, according to the authors. Patients who underwent at least one ECT series of at least seven sessions responded particularly well to VNS. The combined therapy was also more effective in ECT nonresponders than the usual therapy alone.

To date, only one sham-controlled study of VNS treatment for therapy-resistant depression has been conducted. In it, VNS was not significantly superior to a sham stimulation over an observation period of 10 weeks. However, observational studies have provided evidence that the antidepressant effect of VNS only develops after at least 12 months of treatment. According to Reif-Leonhardt and her colleagues, the data indicate that differences in response rate and therapy effect can only be observed in the longer term after 3 to 12 months and that as the therapy duration increases, so do the effects of VNS. From this, it can be assumed “that the VNS mechanism of action can be attributed to neuroplastic and adaptive phenomena,” say the authors.

The typical, common side effects of surgery are pain and paresthesia. Through irritation of the nerve, approximately every third patient experiences postoperative hoarseness and a voice change. Serious side effects and complications, such as temporary swallowing disorders, are rare. By reducing the stimulation intensity or lowering the stimulation frequency or impulse width, the side effects associated with stimulation can be alleviated or even eliminated. A second small surgical intervention may become necessary to replace broken cables or the battery (life span, 3 to 8 years).

When should VNS be considered? The authors specify the following criteria:

This article was translated from Univadis Germany.