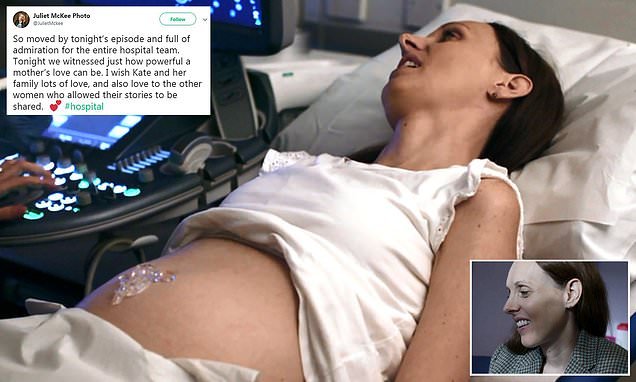 The programme’s third episode followed staff and patients at Liverpool Women’s Hospital as it continues to show behind the scenes of the city’s NHS.

One woman, known only as Kate, was dealt a bombshell diagnosis while pregnant, when she was told her breast cancer had returned and spread to her bones.

On Twitter, people watching the moving documentary called the mother ‘brave and inspiring’, ‘incredible’ and said they were left in tears at the story.

‘Tonight we witnessed how powerful a mother’s love can be,’ one added. 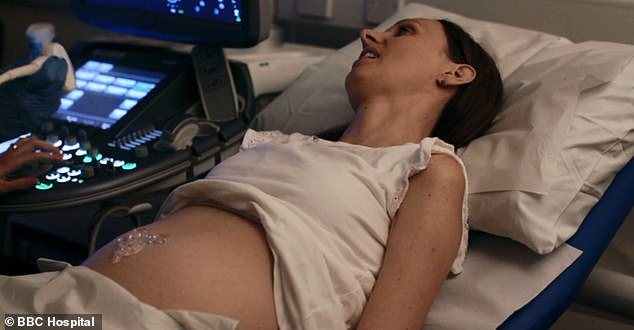 Kate, who was first diagnosed with breast cancer in 2008 and had both her breasts removed to get rid of the disease, was pregnant with her second daughter, Katie-Hope, when she was told the cancer had returned and was incurable 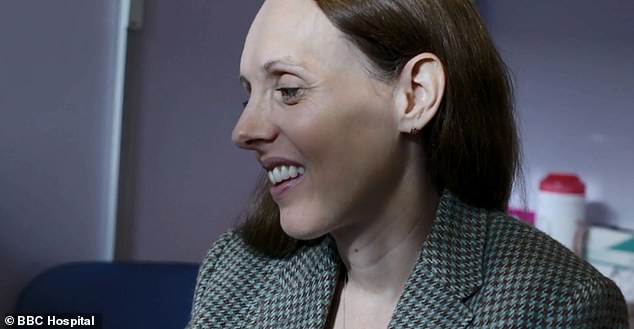 Kate, already a mother to one daughter, had a double mastectomy years earlier to get rid of breast cancer which struck while she was in her 20s in 2008.

Now 10 years since she was first diagnosed, Kate had waited more than five years to start the family she and her husband, Glen, wanted so she could finish a course of drugs to prevent the cancer returning.

Having already had one child, Kate was expecting her second daughter when she was told the cancer had returned.

Faced with the agonising decision of terminating the pregnancy or delaying the best cancer treatment, Kate chose to have her daughter.

Secondary breast cancer – when breast cancer returns in another part of the body – is usually incurable and affects about a third of patients within 10 years.

Kate put off having strong treatment, which would have harmed her baby, and continued with the pregnancy to give birth to Katie-Hope.

The newborn was delivered by c-section six weeks early so Kate could be given the radiotherapy she needs to stave off the cancer.

Doctors don’t know how long the now mother-of-two has left to live.

‘How brave is Kate and her family – nothing but admiration for them,’ Twitter user Mel said.

Sue Reeve said she was ‘in tears for much of tonight’s excellent programme’, in which doctors juggled treating Kate’s cancer and delivering her baby safely 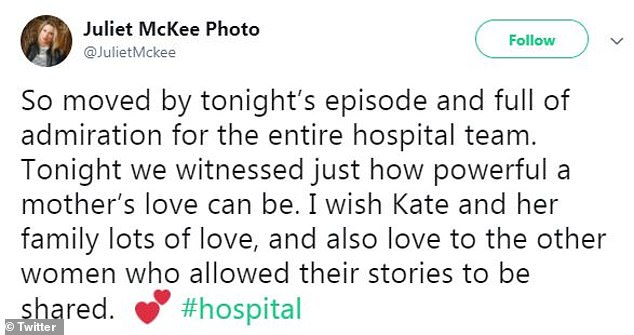 Juliet McKee said she was moved by the episode and remarked: ‘Tonight we witnessed just how powerful a mother’s love can be’ 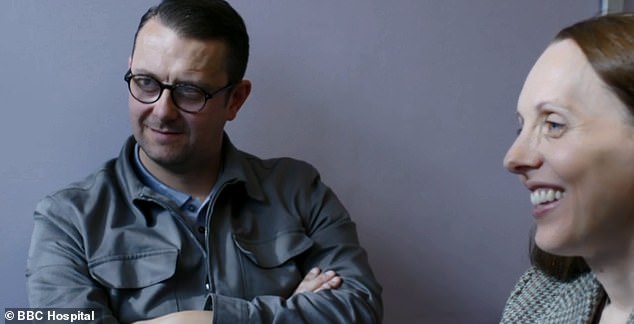 Despite being desperate to be parents, Kate and her husband Glen – who had one daughter already before the programme – had put off starting a family until she finished a five-year course of drugs to prevent the cancer returning after her first treatment

Amanda Smith said: ‘These people are strangers to me and yet my emotions are totally shot with what Kate is going through’

Christine tweeted it was an ’emotional and wonderful moment to see Kate with her newborn daughter,’ adding the new mother was ‘brave and inspirational’

Amanda Smith said: ‘These people are strangers to me and yet my emotions are totally shot with what Kate is going through.

‘How her husband and mother are coping is incredible. So brave.’

Juliet McKee said: ‘Tonight we witnessed just how powerful a mother’s love can be. I wish Kate and her family lots of love’.

‘In tears for much of tonight’s excellent programme,’ Sue Reeve tweeted. ‘I wish Kate and her family all the very best.’ 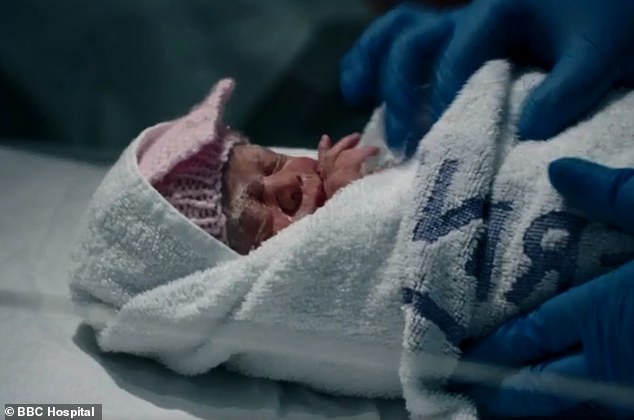 Katie-Hope was successfully born by c-section on the programme, thanks to her mother deciding to put off her cancer treatment in order to avoid having a termination

As well as praising Kate, viewers also spoke about their respect for the staff at the women’s hospital, with other mothers who gave birth there tweeting about it.

Julie Hughes said: ‘The amazing Neo Natal dept at @LiverpoolWomens looked after Jacob for the first 12 days of his life. We couldn’t have asked for more.’

Speaking about Mark Clement-Jones, clinical director of maternity at the hospital, a woman called Mrs Hayes tweeted: ‘Mark delivered our daughter 13 years ago … she was born at 31 weeks weighing only 4lb. He saved my life and my daughter.’

And Twitter user Emily said: ‘My heart is bursting and breaking at the same time watching #Hospital … So proud of all the doctors and staff in Liverpool’. 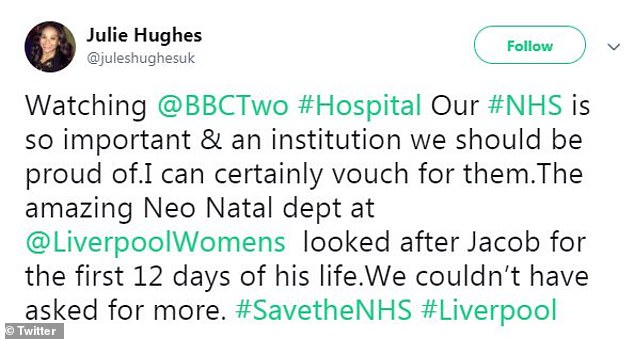 Julie Hughes said: ‘The amazing Neo Natal dept at @LiverpoolWomens looked after Jacob for the first 12 days of his life. We couldn’t have asked for more’ 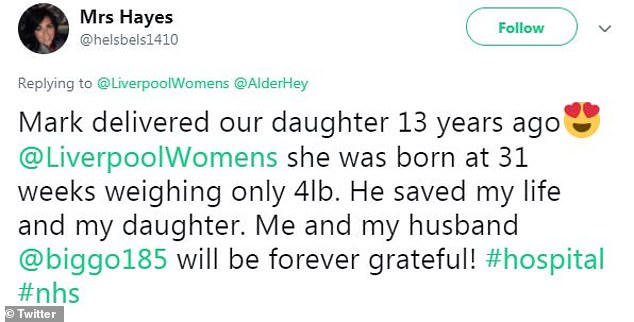 Mrs Hayes said the clinical director for maternity at Liverpool Women’s Hospital, Mark Clement-Jones, saved the lives of her daughter and herself 13 years ago 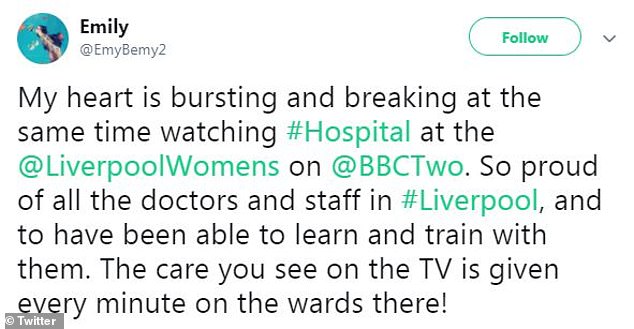 Twitter user Emily said: ‘My heart is bursting and breaking at the same time watching #Hospital,’ adding she was ‘so proud’ of the doctors and medical staff in Liverpool

WHAT IS SECONDARY BREAST CANCER?

The secondary cancer can take years to return, and does not always reappear in the breast.

Some 35,000 people are thought to be living with the disease –  some 35 per cent of women who get breast cancer will be diagnosed with secondary cancer within 10 years.

While primary breast cancer can usually be operated on or cured with drugs or radiation, secondary cancer is incurable.

Because secondary cancer has already started spreading around the body you can never be completely cured of it.

But chemotherapy, hormone drugs and other treatments can slow down the growth and spread of tumours and improve patients’ lives.

Life expectancy varies depending on how advanced the cancer is, but many women live for years with the condition under control.