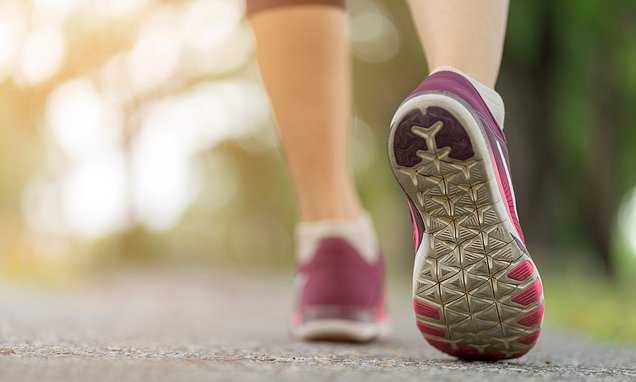 Walking may save the bones of post-menopausal women from decaying – but only downhill and after eating a meal.

However, walking uphill or before food did not have the same effect,  according to a scientific study.

Women can lose up to 20 per cent of their bone density in the five to seven years after the menopause because of a loss of oestrogen.

Keeping physically active could stop the bones becoming weaker, protecting them from being easily broken. 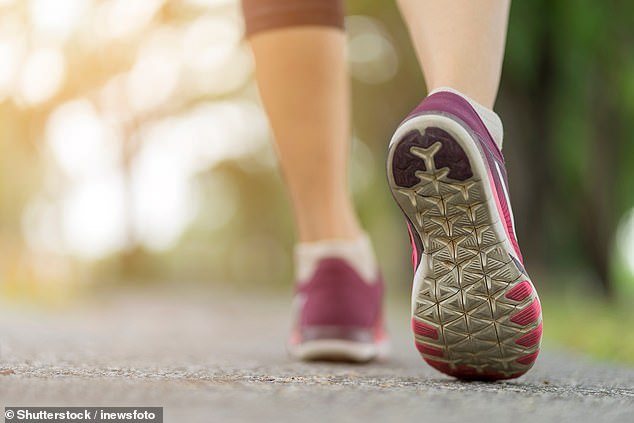 Walking may save the bones of post-menopausal women from decaying, but only downhill and after eating a meal, a study by the University of Michigan found

Therefore the researchers, led by Dr Katarina Borer from the University of Michigan, studied 15 post-menopausal women who had diabetes.

‘We wanted to see whether eating before or after meals, and walking downhill or uphill, had an effect on markers of bone formation and resorption in these women,’ Dr Borer said.

HOW CAN YOU MAINTAIN BONE STRENGTH AS YOU AGE?

The participants were split into groups – participants walked for 40 minutes on either an uphill or downhill treadmill, an hour before or an hour after eating. One group did not exercise.

The women’s blood was measured hourly to look for markers of bone formation and resorption. Their levels of glucose and insulin were also measured.

The women wore special shoe insoles to measure the impact of their walking.

The most effective way to reduce the breakdown of the protein collagen, which helps form bone, was to walk downhill after eating.

‘Exercising after eating may help nutrients from the food get absorbed into the bloodstream,’ Dr Borer said.

‘The best exercise for your bones is the weight-bearing kind, which forces you to work against gravity. When you walk downhill, the pull of gravity is greater.’

Most treadmills do not have a downwards setting, therefore Dr Borer recommends putting cement blocks underneath at the back, or using stairs.

Osteoporosis is a bone condition defined by low bone mass, increased fragility and a breakage – but there can be ways of preventing or slowing down the deterioration.

The condition is estimated to affect 200million women worldwide, hitting approximately one-tenth of women aged 60, according to International Osteoporosis Foundation.

Walking downhill after meals could cut the need for osteoporosis medication in diabetic women, Dr Borer believes following the study.

She said: ‘Before we recommend this, studies would need to be done to determine exactly how much bone mineral they are losing and how much exercise must be done to compensate for reducing the medication.’

The findings were presented on March 24 at ENDO 2019, the annual meeting of the Endocrine Society, in New Orleans.

IS THERE ANY RISK USING HRT FOR WOMEN GOING THROUGH MENOPAUSE?

Menopause, which commonly strikes women in their late 40s and early 50s, can cause depression, hot flushes, headaches and night sweats. Long term, it can also cause bone disease and memory loss.

Hormone replacement therapy (HRT) tackles these symptoms by replacing the female sex hormones – oestrogen and progestogen – as the body stops producing them.

But while it can transform the lives of many women, studies have shown that there may be an increased risk of breast cancer and heart disease from HRT. As a result, many women no longer accept HRT treatment and some doctors will not prescribe it.

It was however noted by the Woman’s Health Concern (WHC) that one of the American studies used women in their mid-sixties who were often overweight as subjects, and these are unrepresentative of women in the UK.

Furthermore, a controlled trial from Denmark reported in 2012 has demonstrated that healthy women taking combined HRT for 10 years immediately after the menopause had a reduced risk of heart disease and of dying from heart disease, contradicting the reports of the earlier studies.

The WHC says HRT is safe provided it is taken for the correct reasons, i.e. to alleviate the symptoms of the menopause, and at the minimum effective dose.