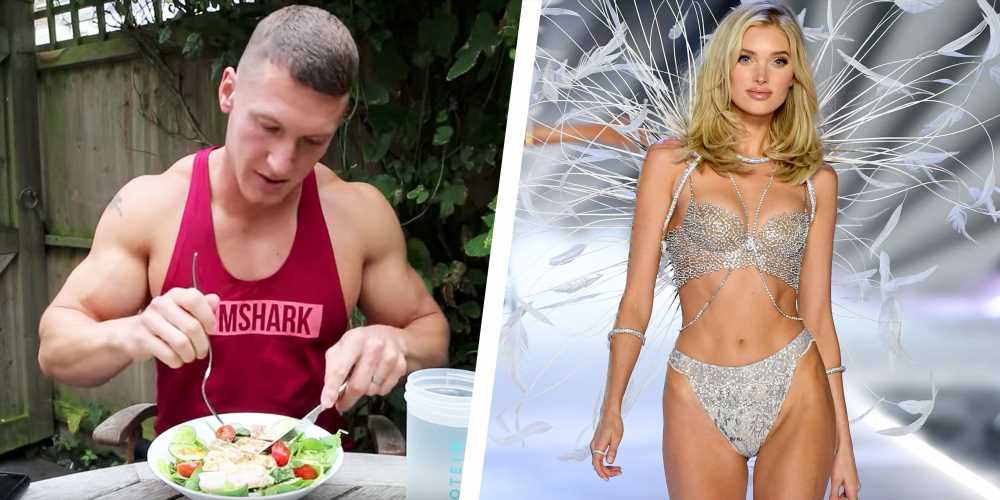 Feel like mixing things up? Why not try eating and working out like a Victoria’s Secret model for a day? YouTuber MattDoesFitness figured it would be pretty funny to do just that—but as the resulting video shows, he gets more than he bargained for.

This is what a day on the Victoria’s Secret model diet looks like:

Matt starts off with a wince-inducing shot of apple cider vinegar, which supposedly has a number of benefits, including helping you lose weight and reduce belly fat (Matt remains unconvinced, or maybe he just doesn’t like the taste). “I’ve solved the mystery of why apple cider vinegar helps you lose weight,” he says later. “You literally feel sick constantly after eating it.”

There is some scientific evidence to support the claim that apple cider vinegar can aid weight loss: for example, drinking it before a starchy meal can help stabilize your blood sugar, preventing food cravings between meals. However, it also comes with a risk of side effects, such as damage to your teeth and bones.

Matt’s not a huge fan of the halved avocado either, believing that it belongs on toast or in a sandwich, but admits that cinnamon does make the grapefruit taste better. He’s also pleasantly surprised by the green juice at first, but the novelty wears off by the end. Now technically, Matt should have gone for the avocado and grapefruit or the smoothie, but as he reasons: “My theory is, Victoria’s Secret models are tiny weasels, I’m massive, so I’m swapping the ‘or’ for ‘and.'”

Next up, he hits the gym for a supermodel workout, starting with a nebulous “five to ten stretches” and then a series of moves which, it soon becomes apparent, muscular Matt is not flexible enough to complete. He later calls it a waste of time, saying: “even calling it a workout is grossly misleading.”

Lunch is a green salad with chicken breast. This low-carb option would help reduce calorie intake ahead of a show, Matt explains. “When you drop carbs in your diet drastically, all those stores in your muscles are going to go… you’ll lose weight and size really quickly, so I guess for a catwalk model that’s ideal.”

Ending the day on a dinner of quinoa and salmon with broccoli, spinach and carrots, Matt finally feels full, but predicts that he will soon feel hungry again, once his body realizes that the dense meal he just ate was relatively low in calories. He concludes that it’s actually a pretty healthy diet in terms of ingredients, just not in those low amounts, which are unsuitable for his lifestyle.