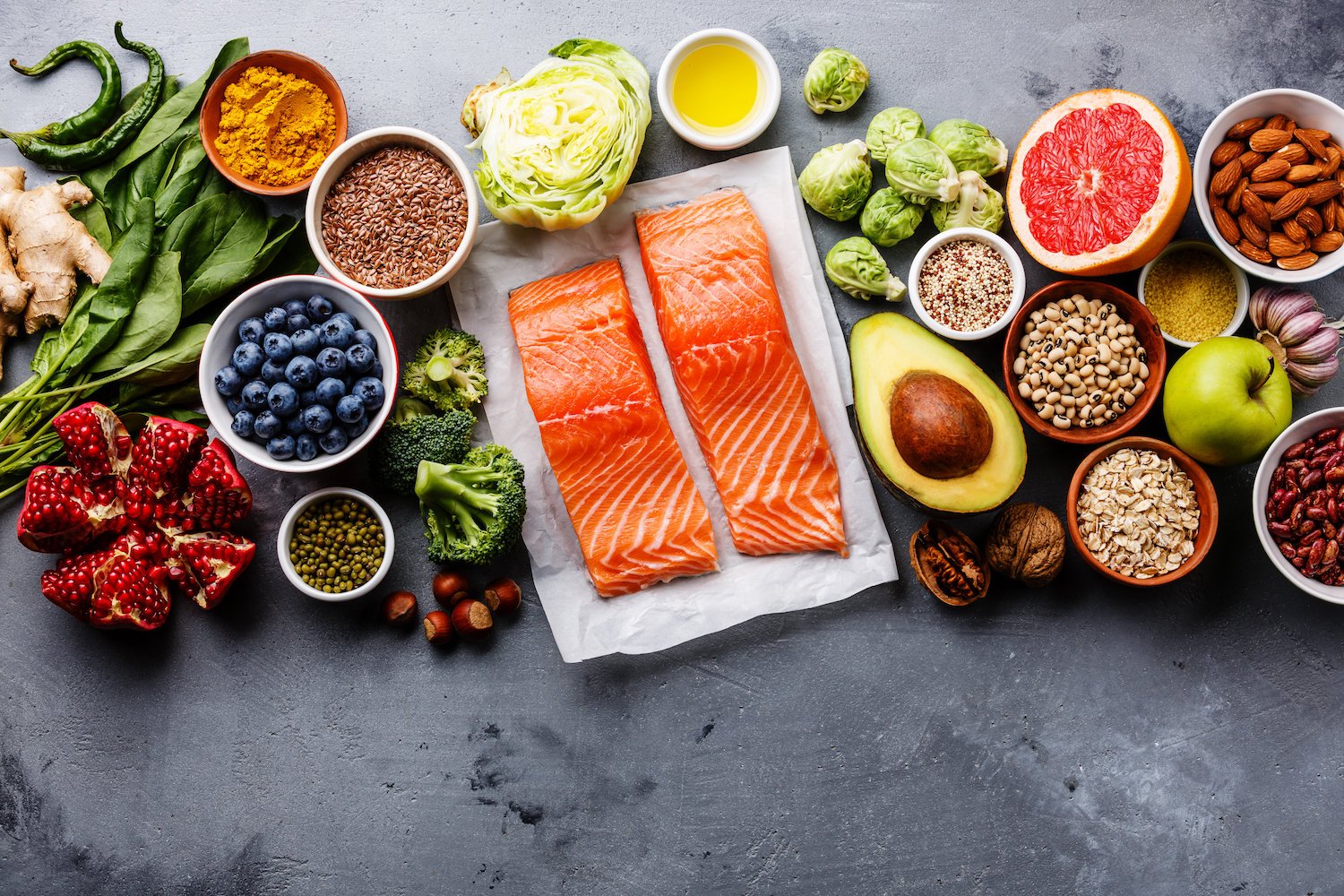 Superfoods are foods — mostly plant-based but also some fish and dairy — that are thought to be nutritionally dense and thus good for one's health. Blueberries, salmon, kale and acai are just a few examples of foods that have garnered the "superfood" label. However, there are no set criteria for determining what is and what is not a superfood, according to the American Heart Association. "Superfoods don't have their own food group," said Despina Hyde, a registered dietician with the weight management program at New York University's Langone Medical Center. "As a dietician, I think 'superfood' is more of a marketing term for foods that have health benefits."

Superfoods contain a variety of nutrients, such as antioxidants, which are thought to ward off cancer. They also have healthy fats, thought to prevent heart disease; fiber, thought to prevent diabetes and digestive problems; and phytochemicals — the chemicals in plants responsible for deep colors and smells, which can have numerous health benefits. Consuming foods that are packed with nutrients (as many so-called superfoods are) is certainly a good idea, Hyde told Live Science. But the key to a healthy diet is to consume a variety of nutritious foods in the right quantities, she added.

Blueberries often top many lists of superfoods because they are rich in vitamins, soluble fiber and phytochemicals. But the same nutrients found in blueberries are also found in many other kinds of berries, including strawberries and cranberries. A study published in 2013 in the journal Circulation found that a high intake of phytochemicals known as flavonoids — which are found in blueberries as well as other kinds of berries — may reduce the risk of certain heart conditions in young women. But the small, vibrant berry may take the top spot purely because it has been more frequently studied, experimental psychologist Barbara Shukitt-Hale told The Atlantic.

Kale lives up to the hype it has attracted as a superfood, but so do most dark, leafy greens: Swiss chard, collards, mustards (including radish greens), spinach (and others in the amaranth family) and cabbages. Include broccoli on that list as well. It's in the cabbage-mustard family; the modern version is grown for its flower instead of its leaves. These dark vegetables are loaded with vitamins A, C and K, as well as fiber, calcium and other minerals.

Sweet potatoes and squash also usually make the superfood list, for reasons similar to those listed for leafy greens. Both kinds of food are generally excellent sources of fiber, vitamin A and much more. They are also naturally sweet and don't require the butter, cream or salt typically added to potatoes.

Beans and whole grains are also included on superfood lists. Beans are a source of low-fat protein. These nuggets of nutirtion contain insoluble fiber, which lowers cholesterol; soluble fiber, which provides a longer feeling of fullness; and loads of vitamins and trace minerals largely absent in the typical American diet, such as manganese. Whole grains — named as such because, unlike refined grains, they are not stripped of their nutrient-containing bran and germinating part during processing — have benefits similar to those found in beans, though they don't contain as much protein. Quinoa is not a grain, but it cooks up like one, and is also a remarkable source of protein, vitamins, minerals, fiber and antioxidants.

Nuts and seeds contain high levels of minerals and healthy fats. Although these are common additions on superfood lists, the downside is that they are high in calories. A quick handful of nuts could contain more than 100 calories, according to Hyde. Shelled nuts and seeds, in this regard, are ideal because they take time to crack open, which slows you down. [Reality Check: 5 Risks of Raw Vegan Diet]

Salmon, sardines, mackerel and certain other fatty fish are rich in omega-3 fatty acids, which are thought to lower the risk of heart disease and stroke. The benefits of eating fish may far outweigh the risk of harming your health from the mercury these fish contain, according to the Harvard T.H. Chan School of Public Health. If you worry about the contaminants your fish dinner may contain, avoid eating fish that are high up on the food chain. Certain fish, such as sharks, swordfish, king mackerel and tilefish, contain higher levels of mercury than smaller fish, like sardines, smelt and anchovies.

Any superfood list is sure to contain an "exotic fruit of the year." This might be acai berry, noni fruit, dragon fruit, rambutan or pomegranate. These fruits might be healthful, but scientific studies don't show that they are more healthful than other, less exotic (and therefore less expensive) fruits, such as blueberries. Some of these fruits may be particularly dense in certain kinds of nutrients. Pomegranate, for example, contains ellagitannins (ellagic acid), which may have anti-cancer properties. But red raspberries, which are arguably just as delicious as pomegranate seeds, also contain ellagic acid.

Criticism of the nomenclature

Scientists claim that use of the term "superfood" is largely a marketing tool, with no root in academic research. Still, manufacturers rely heavily on marketing ploys and lobbyists to shape the public's perception of their products.

In an attempt to sway public opinion about the health benefits of macadamia nuts, for example, Royal Hawaiian Macadamia Nut — the world's largest purveyor of Hawaii's coveted crop — lobbied the U.S. Food and Drug Administration to make a claim linking the consumption of macadamia nuts to a reduced risk of coronary heart disease. The FDA responded by releasing a carefully worded statement noting that consuming 1.5 ounces of macadamia nuts per day as part of a low-fat and low-cholesterol diet could potentially "reduce the risk of coronary heart disease." It wasn't exactly a ringing endorsement, but the macadamia nut industry took that to the press and consumers went, well, nuts.

Another general criticism of the use of the term "superfood" is that, while the food itself might be healthful, the processing might not be. For example, when green tea is freshly brewed, it has several antioxidants. Commercially manufactured bottled green teas, however, are often cut with inferior teas and brewed with copious amounts of sugar. Many kinds of "super-juices" squeezed from acai berry, noni fruit and pomegranate can also include large amounts of added sugar.

Similarly, whole grains are often processed so that they're more palatable, but it makes them less healthful. For example, instant whole-grain oats are as unhealthy as overly processed white bread, in that they quickly spike sugar levels in the bloodstream once consumed, promoting insulin resistance, obesity and diabetes, Dr. David Ludwig told NPR.

Because the term "superfood" is not scientific, it can mislead consumers, prompting them to eat one kind of food over another. Instead, Hyde said she encourages her clients, many of whom are trying to lose weight, to eat everything in moderation. "When we label these foods as 'super' and 'healthy,' people think they can eat them in unlimited quantities," she said. "But you do have to be cautious of the amount you eat, because you can gain weight from eating too much healthy food."

Research has shown that the ideal diet is one that is largely plant-based, with a wide variety of fruits, vegetables, whole grains and healthful animal products. Superfoods might be a good entry into healthy eating, and understanding the nutritional value of the food you eat can be enlightening, but there are lots of healthy foods out there to explore, even if no one is calling them "super."

This article was updated on March 18, 2019 by Live Science contributor Jennifer Leman.