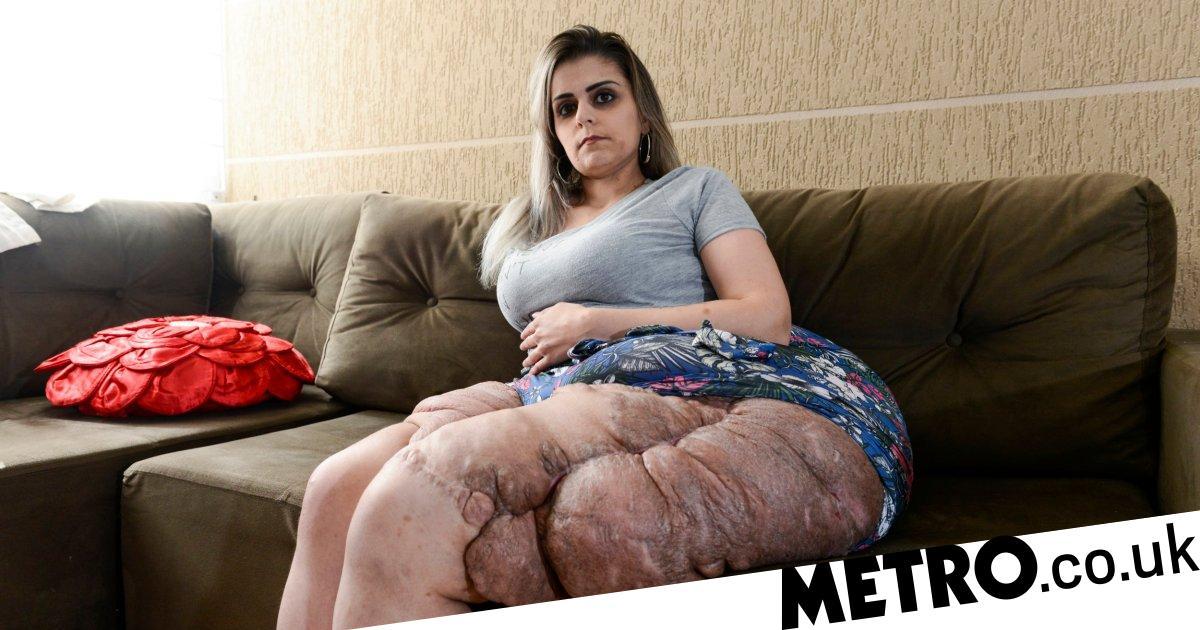 Parents of Karina Rodini, from Curitiba, Brazil spotted small dark moles on her leg when she was a toddler.

At the age of two, she was diagnosed with a rare disease called neurofibromatosis that resulted in tumours forming on nerve tissue.

After having surgeries to remove the tumours which were growing on her hips and legs, between the ages of 15 and 16, they became bigger and bigger.

Now 28 years old, Karina worries that they will never stop growing. The condition, which has left her with tumours weighing 4kg, means she struggles to walk and suffers from severe scoliosis.

The left side of her body is also affected and she is unable to see properly with her left eye.

She is hoping to remove the tumours and needs more surgeries so it doesn’t spread out more throughout the body where it can grow internally and externally.

And no matter how much people look and make comments, Karina says she refuses to hide the giant tumours.

She doesn’t want to give in to the prejudices of other people.

Unfortunately though, there are not many doctors specialising in neurofibromatosis in Brazil, therefore, Karina hopes to get treatment abroad.

Her family has now set up a GoFundMe page in hopes to raise funds for treatment that could change her life.

While she waits for those funds to be raised, Karina said she is working on embracing her body.

‘In this last year when the disease has affected me more, I felt shy of exposing myself, of taking pictures, of being recorded.

‘But now I try to overcome my insecurities.

‘I try to expose myself more, especially because there are many people who have the same disease who have reached out to me.’

Karina believes that talking publicly about her disease means she can help others who suffer from similar conditions.

‘You have to show yourself, you have to talk about the disease, you don’t need to be embarrassed,’ she added.

MORE: A woman covered in thousands of tumours is embracing her body

MORE: Woman had cancerous tumours as big as watermelons on her ovaries