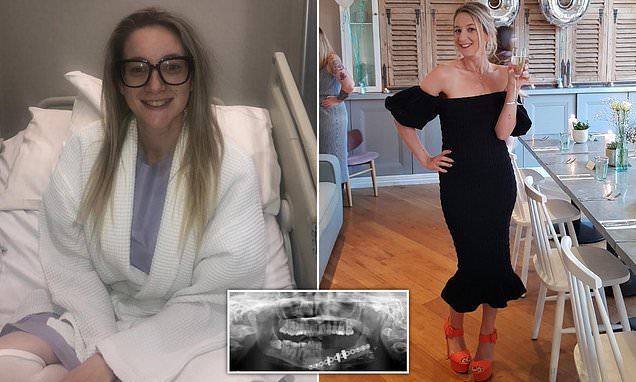 Woman, 30, relearns how to walk after surgeons used her HIP BONE to rebuild her jaw which was destroyed by an aggressive tumour 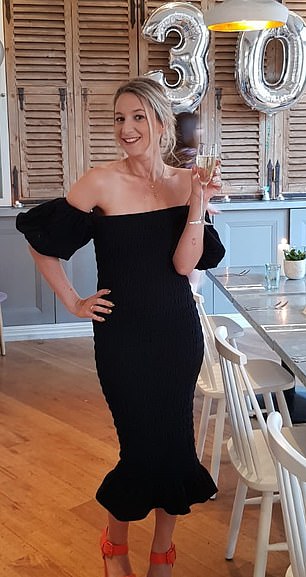 Samantha Levy, 30, from Wandsworth, had her jaw rebuilt with part of her hip bone after an aggressive tumour destroyed it, leaving her unable to walk

A woman whose jaw was destroyed by an aggressive tumour and rebuilt with part of her hip bone can finally walk again.

Samantha Levy, 30, of Wandsworth, was at a routine dentist appointment in October 2017 when a mass was spotted on X-rays.

Ms Levy, who works in digital advertising, had no idea her jaw was being rotted away until the benign tumour was accidentally stumbled upon.

Surgeons fixed Ms Levy’s jaw in a series of gruelling operations, including an 11-hour procedure that left a gaping hole in her hip bone.

She was left wheelchair-bound for five weeks while slowly regaining her ability to walk.

Now, Ms Levy – who has recovered from her life-changing operation – is trekking the Great Wall of China to thank her surgeons.

She said: ‘I’m quite proud of myself that I went from wheelchair to a zimmer frame to crutches and I was insistent that I walked out of the hospital unaided.’

In October 2017, Ms Levy’s dentist noticed a mass that hadn’t been there in a check-up carried out a year before. She was referred to see her doctor.

Ms Levy had a biopsy, which revealed in December that she had a rare tumour called an odontgenic myxoma.

Ms Levy needed part of her jaw bone and a total of six teeth removed. She had a wire fitted in February 2018 to keep the rest of her jaw together 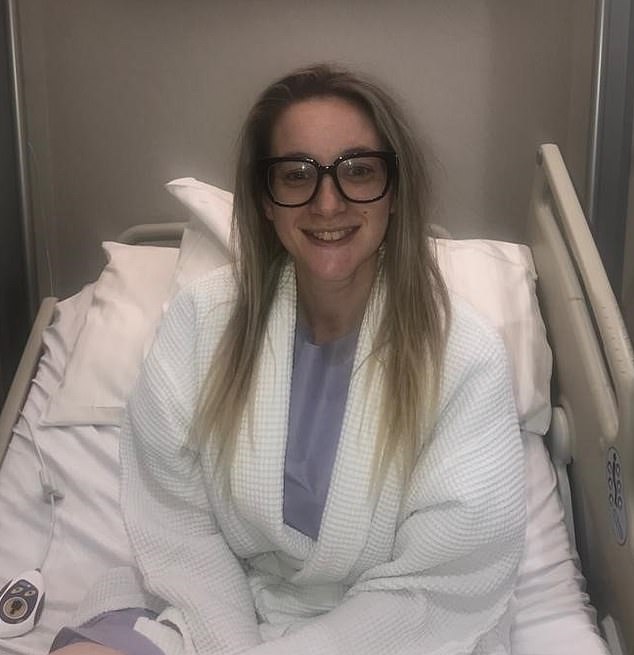 Surgeons worked on Ms Levy’s jaw in a series of operations, including one which rebuilt her gum with stomach muscle. She is pictured in hospital

The diagnosis had come as a shock because Ms Levy had no symptoms, despite the tumour slowly eating through the jaw on her left side.

Medics warned had the tumour been left any longer undiagnosed, it could have caused her face to drop on one side.

Ms Levy said: ‘I felt really petrified and then I just decided to try and learn as much about it as possible.

‘I realised at that point there’s no literature, nothing out there for such a rare tumour.

‘I always say, we get given a sense of humour so you can laugh your way through things. I laughed myself through quite a lot of it.’

Ms Levy had major surgery on February 5, 2018 to remove the damaged jaw bone and five teeth. A wire kept the rest of her jaw together. 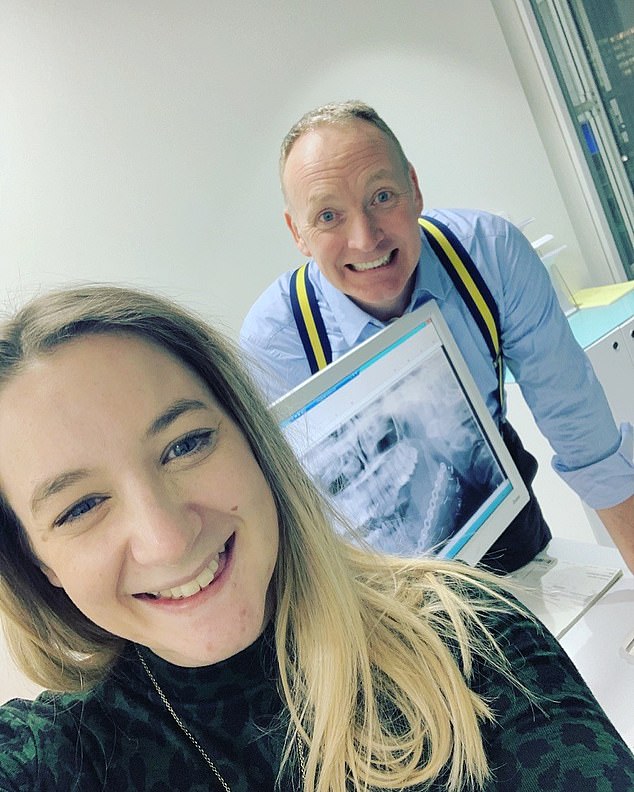 Ms Levy was so worried about her eleven-hour operation she stopped sleeping and eating. She is pictured with her consultant surgeon Luke Cascarini

She said: ‘With the wires on your jaw it is really difficult. You have to write things down, it is really hard to speak and you can’t brush your teeth.

‘I remember being really anxious before my first operation because I was told that when I woke up I wouldn’t be able to speak.’

Ms Levy added: ‘That for me was a real mind boggle because I talk a lot. That was quite challenging.’

On March 8, Ms Levy had a second operation to have her wires removed.

WHAT IS AN ODONTOGENIC MYXOMA?

Odontogenic myxoma is a rare growth of tissue, which is benign but aggressive to the mouth area.

An odentogenic tumour is generally known as a tumour in the jaw.

Odonteogenic myxomas represent about three per cent of all odontogenic tumours – of which the prevalence is unclear.

A myxoma is a tumor of primitive connective tissue, usually occurring in the heart.

It rarely appears in any bone other than the jaw bone and doesn’t spread.

It tends to be slow-growing and painless, but can cause ulcerations, a tingling sensation and movement of teeth. The tumour normally presents as a swelling in the jaw.

Cases are generally reported in those aged ten to 40 years old.

Treatment may include surgery and radiotherapy.

But surgeons discovered they would need to operate again to take out more of the jaw and another tooth.

It was in June that Ms Levy had what she calls ‘my enormous surgery’, which lasted eleven-and-a-half hours.

Ms Levy said: ‘About ten days before, my parents and I sat down with the surgeons. They explained everything that was going to happen.

‘We had to have some models made of my hip as well as my jaw so they could plan the surgery.’

During the marathon procedure, bone was cut from her hip and used to rebuild her jaw along with a piece of metal.

Ms Levy, who doesn’t remember anything that happened in the six days after the op, also had muscles taken from her stomach to replace part of the gum.

She said she was petrified because of the length of the operation, adding that she struggled sleeping and lost her appetite in the run-up to the procedure.

‘It’s huge and I knew when I came out I was going to look really different,’ she said.

‘I’ve seen photos of what I looked like but I’m quite thankful I don’t remember it.’

Following the op, Ms Levy needed physiotherapy daily for four weeks to get her back on her feet and walking with the help of a zimmer frame.

She was initially warned it could take a year of using a walking stick, at least, to build her strength again.

Ms Levy’s final operation in May 2019 was to remove the metal plate that held her face in place along the jawline. 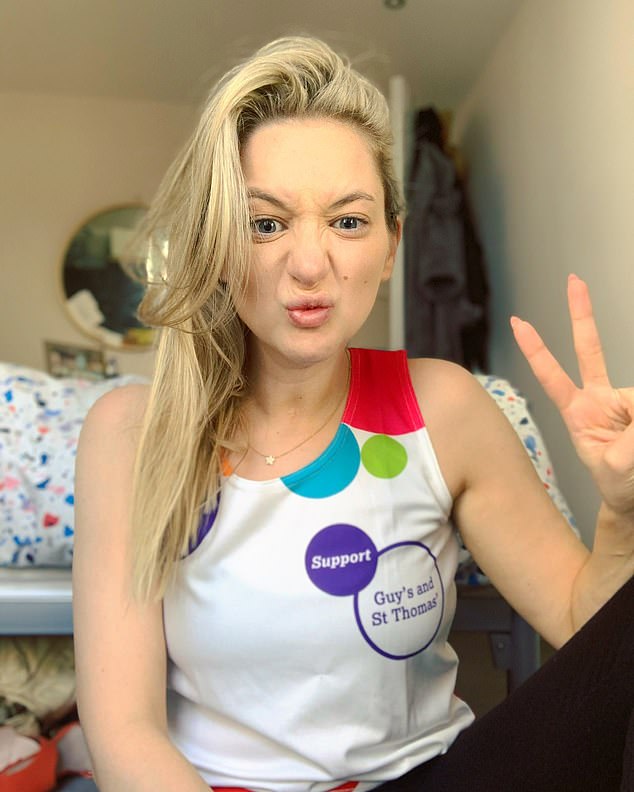 Consultant surgeon Luke Cascarini said: ‘We are incredibly grateful that Ms Levy wants to support Guy’s and St Thomas’ in this way.

‘Her positive attitude shone through during everything that she went through so I know the trek will be another challenge she’s determined to conquer.

‘It’s certainly one way for Sam to test out her new jaw and hip.’

Ms Levy is raising money for Guy’s and St Thomas’ by trekking the famous landmark in China for seven to eight hours a day for seven days, starting today.

She said: ‘This is something I’ve always wanted to do but I actually decided to do it when I was in the hospital after my enormous surgery.

‘Before I’d never had the courage or a reason to do it. I‘m so excited. I’ve got a real new lease of life since I was ill.

‘I was not particularly fit or active before but this really gave me that opportunity to take care of myself and I have been ever since.

‘A lot of people say when you start your life again it’s usually when you’re much older and you’ve already lived a life.

‘I am blessed to be able to take this opportunity and start a new life for myself in my thirties.’