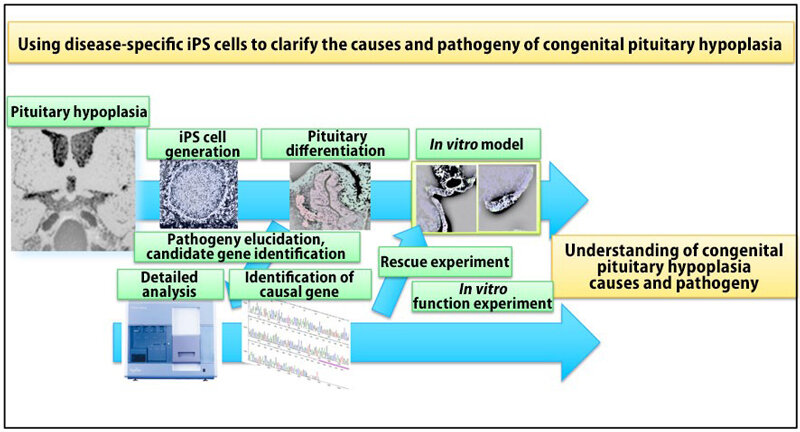 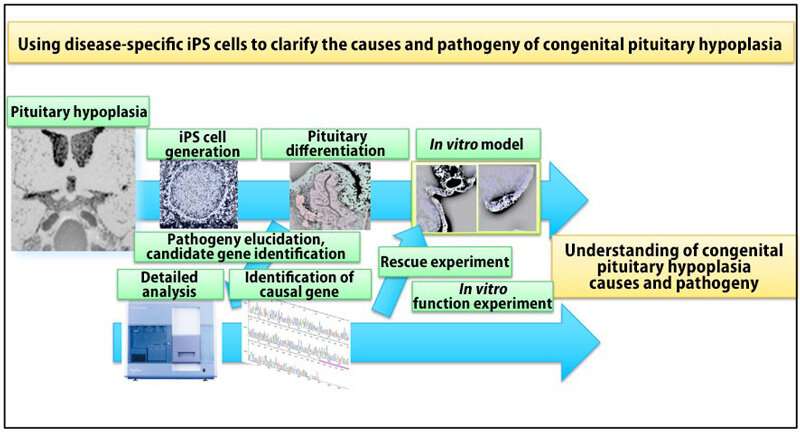 The results of this study were published in the American scientific journal J Clinical Investigation on December 17, 2019.

Hypopituitarism caused by CPH is not uncommon and it is sometimes life-threating. Patients with this disease require lifelong hormone replacement therapy. The causes and underlying mechanisms are not well understood.

Prior research on pituitary diseases has been mainly conducted using animal models, such as knock out mice. However, sometimes there are differences in the phenotypes between animal and human. This means that human models are necessary in order to fully understand the mechanisms of such diseases.

In recent years, iPS (induced pluripotent stem) cells have been utilized in the development of disease models, regenerative medicine, and drug discovery. In addition, a method using iPS cells to induce differentiation of both the pituitary and hypothalamus in vitro has been developed; however it had yet to be applied to pituitary disease modeling.

With this in mind, researchers at Kobe University’s Graduate School of Medicine have applied this strategy to develop a human model of CPH in vitro using iPS cells to understand the pathophysiology and causes of the disease. 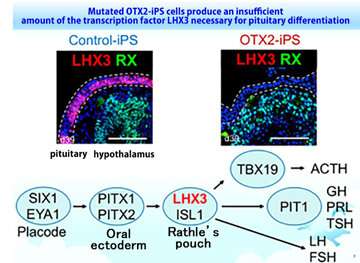 Interactions between the pituitary and the adjacent hypothalamus are essential for pituitary differentiation and regulation. An advantage of this model is that it can simultaneously develop the pituitary and hypothalamus in vitro from iPS cells. This allowed the researchers to investigate the significance of interaction between these tissues. They clarified that the hypothalamus was responsible for the disease by performing chimera formation experiments using both patient-derived iPS cells and healthy iPS cells. Subsequent analysis exhibited that FGF10 (fibroblast growth factor 10) from the hypothalamus plays a pivotal role in the expression of the transcription factor LHX3 in the pituitary. Furthermore, expression levels of LHX3 were restored by adding FGF10 in vitro. These results demonstrated that FGF10 deficiency in the hypothalamus associated with OTX2 mutation was responsible. 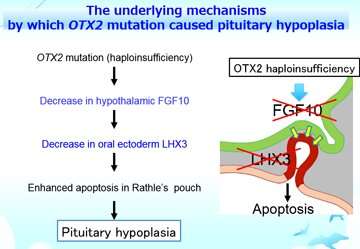 Collectively, the OTX2 mutation caused a decrease in hypothalamic FGF10, resulting in a lack of LHX3 expression in the oral ectoderm, which is the precursor of the pituitary. Consequently, loss of LHX3 caused apoptosis of the precursor cells, therefore causing the impaired development of the pituitary. These underlying mechanisms were illuminated for the first time by this study. 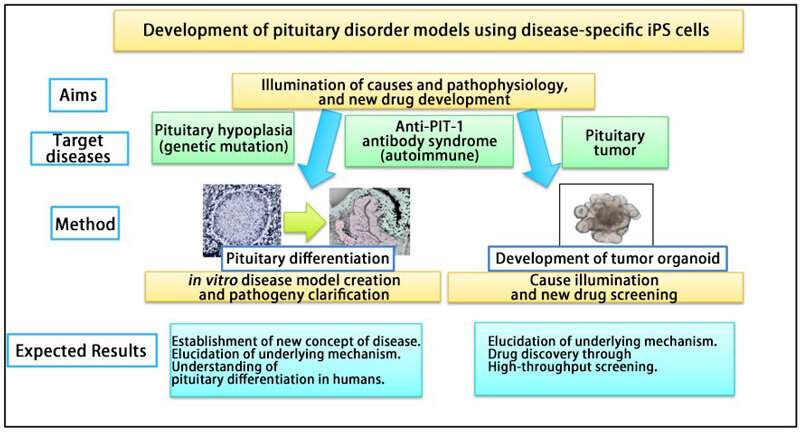 This research revealed the pathophysiology of CPH through disease-specific iPS cells. Furthermore, the model was also useful for understanding the pituitary differentiation process in humans.

This research team is also investigating the causes, pathogenesis and treatment of other pituitary diseases (such as autoimmune disorders and pituitary tumors) using the same strategy. In particular, they are continuing to develop pituitary disease models to investigate the pathophysiology and precise mechanisms underlying the ‘Anti-PIT-1 antibody syndrome,’ which is a novel type of autoimmune pituitary disease that the team has established as a new clinical entity. Using this model, they have already demonstrated the antigen presentation of PIT-1 protein epitope on the anterior pituitary cells derived from patient iPS cells.

EXCLUSIVE: Charlize Theron on Her Charity’s Partnership With Dior, Sequel to ‘Atomic Blonde’ and More

Holidays Can Be a Fright for Kids With Food Allergies