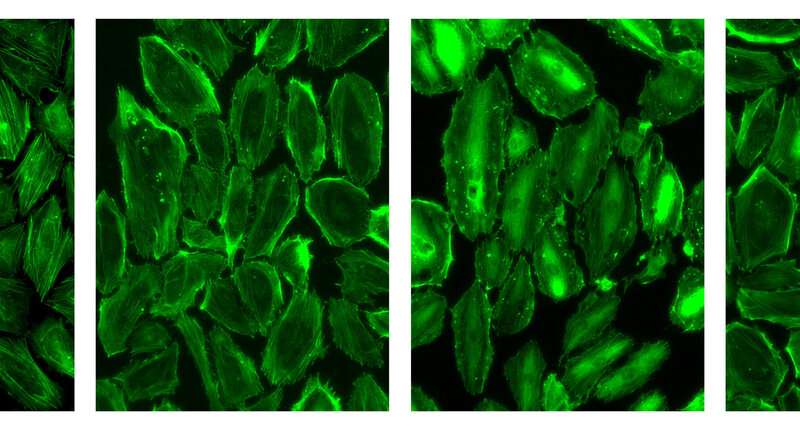 Leaky lungs are a very common side effect of heart failure, but all currently available drugs do is reduce the amount of fluid in the body, rather than plug the leak itself. A new gene therapy created at the Wyss Institute and Boston Children’s Hospital and tested in human Lung Chips blocks the mechanical function of a channel protein implicated in lung leakage while leaving its chemical functions intact, offering a new potential clinical target for pulmonary edema with minimal toxicity.

About 80% of patients with heart failure develop pulmonary edema—the leakage of fluid out of the lungs’ blood vessels and into the air-filled alveoli. This condition reduces the amount of oxygen that the lungs can absorb, which can prevent patients from doing everyday activities and even be fatal. There are no drugs currently available to directly treat the leakage once it starts; the most commonly prescribed medications simply lower blood pressure or the amount of fluid in the entire body in an attempt to reduce the damage.

Now, a project a decade in the making at the Wyss Institute for Biologically Inspired Engineering at Harvard University and Boston Children’s Hospital (BCH) has identified a molecular pathway that could offer a way to target pulmonary edema itself with minimal side effects. The advance is based on engineering of adeno-associated virus (AAV) vectors as gene therapy delivery systems that target the lung and studies using primary human lung cells in a Lung Alveolus Chip. The research is reported in APL Bioengineering.

“Pulmonary edema is similar to a leak in a water pipe. The most effective thing to do is to plug the leak, but current drugs on the market work to shut off the water supply altogether and hope the leak fixes by itself,” said first co-author Ratnakar Potla, Ph.D., M.B.B.S., a Research Fellow previously in the Vascular Biology program at BCH and now at the Wyss Institute. “With our method, we can actually target the leak, which is a much more efficient way to address the problem.”

The team focused their investigation on a specific channel protein found in the membranes of lung cells that regulates the flow of substances between the lung’s alveoli (air sacs) and blood vessels, called TRPV4. This channel is known to be activated by physical forces, such as the motion of breathing. Its mechanosensitivity can also cause a problem, however, in patients who have increased pressure in their lungs’ blood vessels, often caused by a backup of fluid when the heart can no longer pump effectively. The physical strain imparted on TRPV4 activates it, causing the lung tissues to become more “leaky,” which in turn puts more pressure on the surrounding blood vessels, causing a vicious feedback loop that worsens pulmonary edema.

Drugs have been developed to shut down TRPV4 chemically by blocking all channel activity, including a candidate from GlaxoSmithKline currently in a phase III clinical trial. But TRPV4 activity plays an important role in many other body processes, such as bone remodeling and bladder tone, so its complete inactivation can cause unwanted side effects and toxicities that limit the amount of drug that can be delivered.

To circumvent this problem, the Wyss and BCH researchers focused on a different membrane protein, CD98hc, which is responsible for transmitting mechanical forces to the TRPV4 channel. In separate studies, they found that the overexpression of a specific region of the CD98hc protein (the high homology, or HH domain) prevents mechanical activation of TRPV4, so the team hypothesized that a gene therapy delivering that region of the protein to lung cells could be an effective treatment for vascular leakage in the lung that leads to pulmonary edema.

To test that theory, they created gene therapy constructs using different serotypes of AAV as delivery vehicles containing the genetic sequence that codes for the HH domain of the CD98hc protein. They then tested how well the constructs delivered their cargo into the genomes of human pulmonary alveolar epithelial cells and human primary lung microvascular endothelial cells—the cell types that form the interface between air and liquid spaces in the lung. They identified AAV2.5T as the most promising serotype, as it could successfully infect and drive gene expression in both the epithelial and endothelial cells.

Crucially, the cells that overexpressed the HH domain of CD98hc displayed almost complete inhibition of mechanically-activated calcium signaling through TRPV4, while a drug that stimulates TRPV4 chemically could restore this calcium signaling response—evidence that the gene therapy blocked TRPV4’s mechanical signaling pathway while leaving the rest of its functionality intact.

The researchers then evaluated the effect of overexpression of the HH domain in a human Lung Alveolus Chip previously developed at the Wyss Institute as a clinically relevant model for a human lung. The microfluidic chip contains two parallel channels separated by a permeable membrane, one lined with primary human lung alveolar epithelial cells and perfused with air, and the other with human lung endothelial cells and perfused with liquid medium. To simulate the physical forces imparted on the cells by breathing motions, the chips are cyclically stretched and relaxed using suction. The team observed that when the chips’ air channels were filled with fluid for four hours to simulate pulmonary edema, the barrier between the chips’ air and liquid compartments was compromised, and the chips failed to recover even after the fluid was removed.

When they introduced their gene therapy vector into the chips, they saw that leakage was greatly reduced and the barrier strength of the lung cells remained intact, even when under physical strain mimicking breathing motions. “Remarkably, we saw a significant improvement in lung function even though only about 30% of the lung epithelial cells and 10% of the vascular endothelial cells were successfully transduced with the gene coding for the HH domain of CD98, indicating that this strategy is extremely protective,” said co-author Rachelle Prantil-Baun, Ph.D., a Senior Staff Scientist at the Wyss Institute.

To determine how blocking the mechanical activation of TRPV4 provides this protective effect, the researchers analyzed the cells in the Lung Alveolus Chip using fluorescence imaging. They saw that submerging the air channel in fluid without the application of their gene therapy led to breaks in the cell-cell junctions that help maintain the integrity of the air-liquid barrier, while these junctions remained intact in cells treated with the gene therapy.

Interestingly, they also found that transfection with the HH domain changed the endothelial cells’ behavior: whereas these cells usually rearrange themselves so that they are perpendicular to the direction of the physical force being applied to them, those with the AAV-delivered gene did not. As a result, the population of cells was more stable, preserving the cell-cell junctions and suggesting a mechanism by which leakiness is prevented. The hope is that these insights can be leveraged to develop specific mechanotherapeutic drugs for more targeted treatment of pulmonary edema in the future.