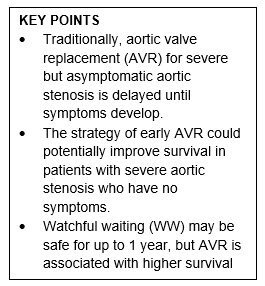 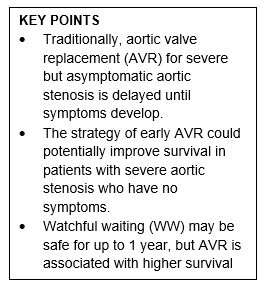 Patients with severe aortic stenosis who have no symptoms may benefit more from an aggressive strategy of early valve replacement than from a conservative watch-and-wait approach, according to new research published today online in The Annals of Thoracic Surgery.

“We know that surgery carries a small risk and that has been one of the reasons to wait until a patient is experiencing symptoms,” said S. Chris Malaisrie, MD, of Northwestern Medicine in Chicago. “However, our data support the role of early valve replacement for asymptomatic severe aortic stenosis.”

The researchers found that two years after the recommended approach, survival in the AVR group was 92.5 percent compared to 83.9 percent in the WW group. In addition, the probability of the patients in the WW groups either dying or undergoing surgery was 43.9 percent by two years. While this study demonstrated a “safe” period for WW (for up to one year), the data at two years suggests there is a benefit to early AVR.

“For both the AVR and WW groups, undergoing AVR was associated with significantly higher overall survival,” said Dr. Malaisrie. “It is important for patients to know that severe aortic stenosis, even when there are no symptoms, carries a poor outcome, if left untreated.”

Aortic stenosis—one of the more serious and most common valve diseases in the United States—occurs when the heart’s aortic valve narrows, preventing the valve from opening fully. Blood flow into the main artery of the body (aorta) is blocked or reduced and the heart is forced to work harder as it pumps blood to the body. Symptoms associated with severe aortic stenosis include shortness of breath, chest pain or tightness, fainting, dizziness, and palpitations or heart pounding.

“If confirmed, these findings would reflect a dramatic potential difference in survival affecting tens of thousands of Americans,” said Todd K. Rosengart, MD, of Baylor College of Medicine in Houston, who was not directly involved with this study. “The results of this study suggest a fundamental change is needed in how we care for patients with narrowing of the aortic valve.

“This advance would mirror what we already know and practice in caring for disease of the other major heart valve-the mitral valve-that you don’t need to and probably shouldn’t wait until symptoms develop to correct significant dysfunction of the heart valves,” Dr. Rosengart added.

Clinical guidelines from the American Heart Association and the American College of Cardiology recommend “active surveillance” in asymptomatic patients, unless stress testing can expose symptoms. In this study, less than 30 percent of patients were referred for stress testing. Dr. Malaisrie agrees that stress testing can be a key differentiator when considering early surgery for asymptomatic patients and he encourages clinicians to continue utilizing it when determining treatment strategies.

Historically, the management for asymptomatic patients includes the accepted practice of WW and delaying AVR until the development of symptoms. However, the WW strategy requires that patients recognize and promptly report any symptoms and that they return to the hospital for a follow-up echocardiogram.

“The onset of symptoms often can be subtle, and patients may attribute important changes to old age without notifying their doctors,” said Dr. Malaisrie. “They need to know the symptoms and report them to the heart team right away. Also, if patients fail to follow-up with recommended imaging, progression of stenosis and features of heart failure can be missed.”

For patients with severe aortic stenosis who have symptoms, the traditional treatment is minimally-invasive AVR—either surgical or transcatheter—which reduces the risks associated with open heart surgery and decreases the recuperation time, explained Dr. Malaisrie, making it a viable option for earlier treatment of patients who have no symptoms.