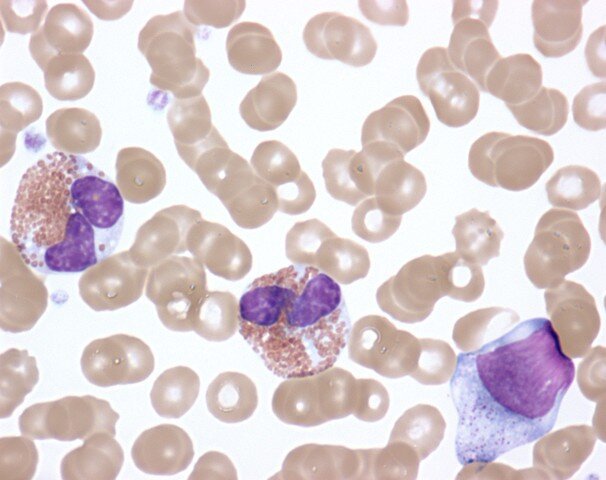 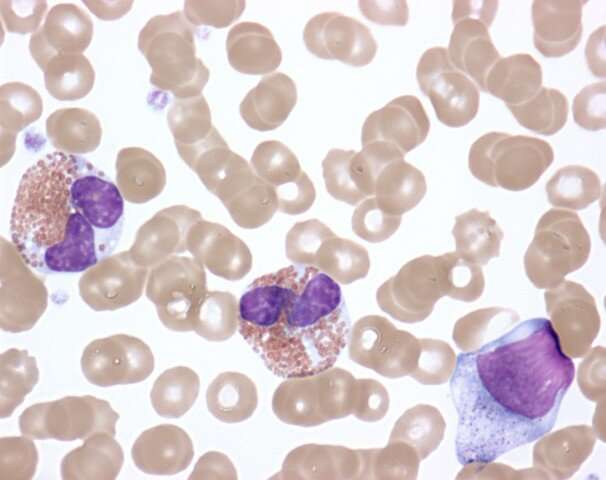 A drug approved to treat a severe form of asthma dramatically improved the health of people with rare chronic immune disorders called hypereosinophilic syndromes (HES) in whom other treatments were ineffective or intolerable. This finding comes from a small clinical trial led by scientists at the National Institute of Allergy and Infectious Diseases (NIAID), part of the National Institutes of Health, and conducted through a partnership with the global biopharmaceutical company AstraZeneca. The results were published online today in the New England Journal of Medicine.

“People living with a rare disease often have few, if any, effective treatment options,” said NIAID Director Anthony S. Fauci, M.D. “This promising treatment advance for people with hypereosinophilic syndromes is just one example of how NIH research responds to the unique medical needs of individuals with rare diseases.”

HES is caused by higher-than-normal numbers of white blood cells called eosinophils in the blood, tissues or both. While most people have 0 to 500 eosinophils per microliter (μL) of blood, people with HES typically have more than 1,500 eosinophils/μL. The symptoms of HES vary widely from one patient to the next and can affect the heart, lungs, skin, gastrointestinal tract, central nervous system and other organ systems.

Nearly all existing therapies for HES involve drugs that are not specifically approved for treating the syndromes, have significant side effects and sometimes become less effective over time. The study reported today was only the second randomized, placebo-controlled trial—the gold standard of medical research—to test the effectiveness of a drug specifically for treating HES. The trial was led by Amy Klion, M.D., chief of the Human Eosinophil Section in the NIAID Laboratory of Parasitic Diseases.

The medication tested in this Phase 2 clinical trial is benralizumab, also known by the brand name Fasenra. It consists of an antibody that binds to a protein, called IL-5 receptor α, found on the surface of eosinophils. Scientists hypothesize that once this binding takes place, immune cells called natural killer cells approach and destroy the eosinophils.

In an earlier clinical trial, benralizumab safely improved the symptoms of people who have a form of asthma associated with an excess of eosinophils in the lungs. Subsequently, the U.S. Food and Drug Administration approved the drug for treating this condition, called severe eosinophilic asthma. AstraZeneca developed and manufactures benralizumab and provided it for the HES trial through a cooperative research and development agreement with NIAID.

The NIAID trial involved 20 people with severe forms of HES who had at least 1,000 eosinophils/μL of blood when they enrolled in the study and whose condition had been stable on other HES therapies for at least a month before enrolling. These study participants all lacked a genetic marker associated with a type of HES that responds to treatment with a different drug. All study visits took place at the NIH Clinical Center in Bethesda, Maryland.

The trial had three phases over a period of 48 weeks. At the start of the first phase, which lasted 12 weeks, study participants were assigned at random to receive either 30 mg of benralizumab or a placebo solution through an injection under the skin once every 4 weeks while continuing to take their current HES therapy. Neither the participants nor the investigators knew who was receiving the study drug or what the participants’ eosinophil counts were during this first phase.

In the second phase, which lasted from week 12 to week 24, all study participants were given 30 mg of benralizumab through an injection under the skin once every 4 weeks. Eosinophil counts were revealed beginning at week 13, and participants could taper their original HES therapy if doing so was tolerable.

During the third phase, those participants whose symptoms or eosinophil counts had improved by week 24 could continue receiving benralizumab until week 48.

At the end of the first phase, blood eosinophil levels were undetectable in nine of the 10 participants who received benralizumab and had declined by 50 percent or more in three of the 10 participants who received the placebo. While the use of an immunosuppressive drug explained why eosinophil counts declined in one of the placebo recipients, the reason for the decline in the other two placebo recipients is unknown.

In addition, eosinophils were undetectable in the bone marrow of nine of the 10 participants in the treatment group in the first phase, and in the tissue of all eight participants whose tissue was tested at the end of the second phase.

A larger placebo-controlled trial of benralizumab for treating HES is needed to confirm these results, according to the study investigators.