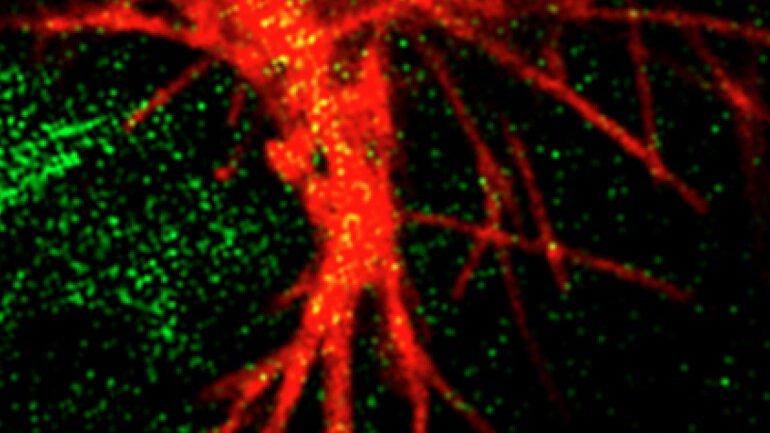 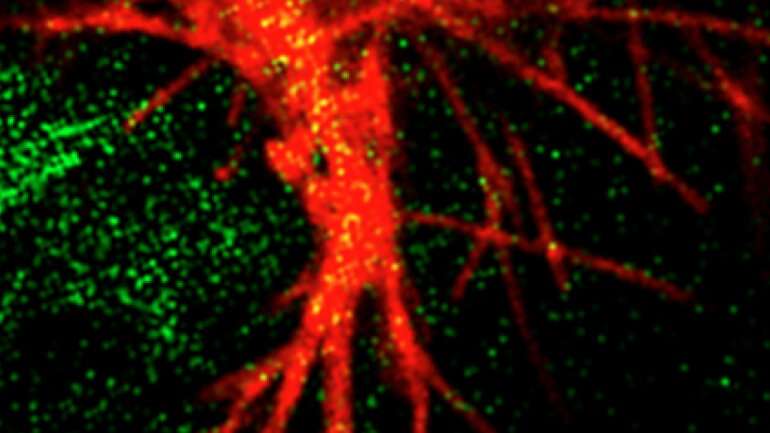 While virtually all cells in an animal’s body communicate with their neighbors in one way or another, many scientists thought that only neurons—the specialized cells that comprise much of the brain and nervous system—produce structures that allow signals to be delivered to specific locations over long distances.

But two decades ago, UC San Francisco Professor Thomas Kornberg, Ph.D., published a landmark paper that upended that conventional wisdom and demonstrated that neurons were not unique in this regard. Most scientists believed then that non-neural cells communicated by releasing molecules that waft around the extracellular fluid until they were taken up by neighboring cells. But Kornberg’s group discovered wire-like projections that they named cytonemes, and found that these structures function like cellular railways, precisely delivering molecular messages to faraway cells.

Now, in a study published March 1, 2019 in the journal Science, Kornberg’s lab has found that a chemical that acts as a neurotransmitter in the nervous system is also essential for cytonemes to mediate cell-to-cell communication between non-neural cells. In addition to showing that cytoneme signaling employs one of the same chemical messengers as do nerve cells, Kornberg’s work elucidates the many parallels between cytoneme signaling and neuronal communication, including the ability to deploy signals at the appropriate time and place with a level of precision once believed to be restricted to neurons.

Neurons communicate with faraway cells by relaying signals along axons—microscopic fibers that project from the nerve cell’s body and extend over long distances to their target. When these projections reach their final destinations, they form a connection known as a synapse, a bridge that links a neuron to its conversational partner and facilitates the delivery of molecular communiques known as neurotransmitters.

This particular form of cell-to-cell communication was thought to be confined to the nervous system. But Kornberg has spent the past 20 years amassing evidence that neurons are not the only cells that produce synapse-forming “wires” capable of directing a molecular message to a specific, distant location.

“What we’ve seen is that garden-variety non-neural cells send out long projections and form synapses that resemble those that neurons make. We never imagined that analogy would extend to the many other defining features of synaptic signaling,” said Kornberg, senior author of the new study and professor at UCSF’s Cardiovascular Research Institute.

But according to Kornberg’s newest paper, cytonemes don’t just look like axons, they facilitate cell-cell communication using glutamate, the most abundant neurotransmitter used by the brain and nervous system to convey sensory information, form memories, and much more.

When the researchers looked more closely at cytoneme synapses, they found that not only was glutamate serving as a signaling molecule, but the molecular complexes responsible for sending and receiving the signal on respective sides of the cytoneme synapse were the same as those found on the equivalent ends of a neural synapse.

“This paper is the first to report this kind of signaling in non-neuronal cells. It brings together two very different fields, developmental biology and neuroscience, by disproving a long-accepted paradigm and identifying a shared basic mechanism of signaling,” Kornberg said.

Though axons have been studied for well over a century, cytonemes managed to avoid detection completely until they were described by Kornberg in 1999. He thinks that cytonemes went unnoticed for so long because of their small size and fragility. They’re an order of magnitude smaller than axons, and they tend to fall apart when subjected to traditional methods of preparing cells for microscope imaging.

Kornberg also believes that cytonemes are likely to be the evolutionary ancestor of the axon. In their paper, Kornberg’s team notes that certain primitive animals that lack axons and neurons have the genes required for cytoneme-mediated signaling.