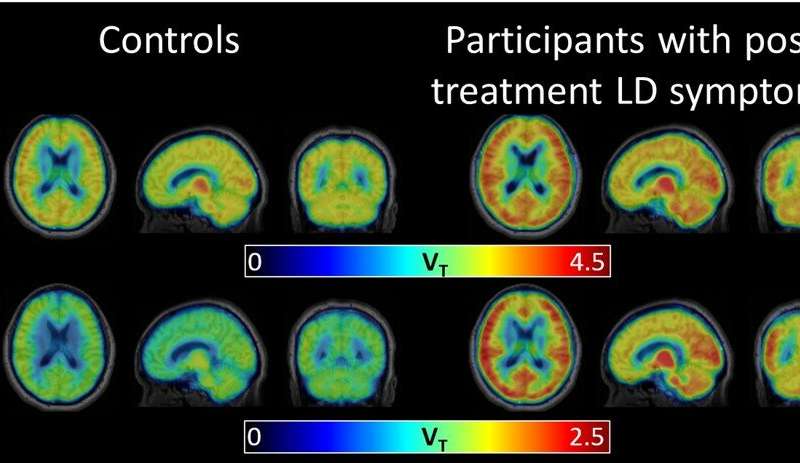 More than 1 in 10 people successfully treated with antibiotics for Lyme disease go on to develop chronic, sometimes debilitating, and poorly understood symptoms of fatigue and brain fog that may last for years after their initial infection has cleared up. Now, in a small study, Johns Hopkins Medicine researchers report they have used an advanced form of brain scan to show that 12 people with documented post-treatment Lyme disease syndrome (PTLDS) all show elevation of a chemical marker of widespread brain inflammation, compared with 19 healthy controls.

Results of the study, published in Journal of Neuroinflammation, suggest new avenues for treating the long-term fatigue, pain, sleep disruption and “brain fog” associated with PTLDS, the researchers say.

“There’s been literature suggesting that patients with PTLDS have some chronic inflammation somewhere, but until now we weren’t able to safely probe the brain itself to verify it,” says Jennifer Coughlin, M.D., associate professor of psychiatry and behavioral sciences at the Johns Hopkins University School of Medicine, and one of the first authors of the study report.

Lyme disease is a bacterial infection transmitted to humans through tick bites. An estimated 300,000 people in the U.S. are diagnosed with Lyme disease each year, and their infections can be successfully treated with antibiotics. Doctors diagnose PTLDS if treated patients report fatigue and brain fog for at least six months after treatment. Little is known about what causes PTLDS or how to treat it, and while studies have shown that people with PTLDS have elevated markers of inflammation—such as the chemokine CCL19—in their bloodstreams, it has not been clear where that inflammation may be occurring.

Over the last decade, Coughlin and her colleagues optimized a positron emission tomography (PET) imaging technique in which specially labeled molecules—or radiotracers—bind to a protein called translocator protein (TSPO). In the brain, TSPO is released primarily by two types of brain immune cells—microglia and astrocytes—so levels of TSPO are higher when brain inflammation is present.

With this type of PET scan, Coughlin’s team says it can visualize levels of TSPO—and therefore levels of inflammation, or astrocyte and microglia activation—throughout the brain. They’ve used it previously to see inflammation in the brains of former NFL players as well as to study brain inflammation in autoimmune diseases such as lupus.

In the new study, Coughlin’s group teamed up with Johns Hopkins Lyme disease researchers and compared PET scans of 12 patients with a diagnosis of PTLDS and 19 without. The PTLDS patients all had a history of confirmed or probable Lyme disease infection, documented evidence of treatment and no history of diagnosed depression. All had reported the presence of fatigue and at least one cognitive deficit such as problems with memory or concentration.

Controls and cases were all adult men (18) and women (13) over age 18 and did not differ significantly in age or body mass index (BMI).

The scans revealed that across eight different regions of the brain, PTLDS patients had significantly higher levels of TSPO compared with controls. On average, when all brain regions were combined and the data was adjusted for genotype, brain region, age and BMI, there was a mean difference of 0.58 between the TSPO levels of controls and patients with PTLDS.

“We thought there might be certain brain regions that would be more vulnerable to inflammation and would be selectively affected, but it really looks like widespread inflammation all across the brain,” says Coughlin.

The Johns Hopkins team cautioned that their study was small, and whether or not the results apply to all people with post-treatment Lyme disease syndrome—such as those with chronic pain but not cognitive symptoms—must await far larger and broader studies. In addition, the current study did not include people who recovered from Lyme disease and did not develop PTLDS, a key control group. But for now, the researchers hope their results give PTLDS patients some hope that the science of PTLDS is advancing.

“What this study does is provide evidence that the brain fog in patients with post-treatment Lyme disease syndrome has a physiological basis and isn’t just psychosomatic or related to depression or anxiety,” says John Aucott, M.D., a senior author of the new paper, associate professor of medicine at the Johns Hopkins University School of Medicine, and director of the Johns Hopkins Lyme Disease Research Center.