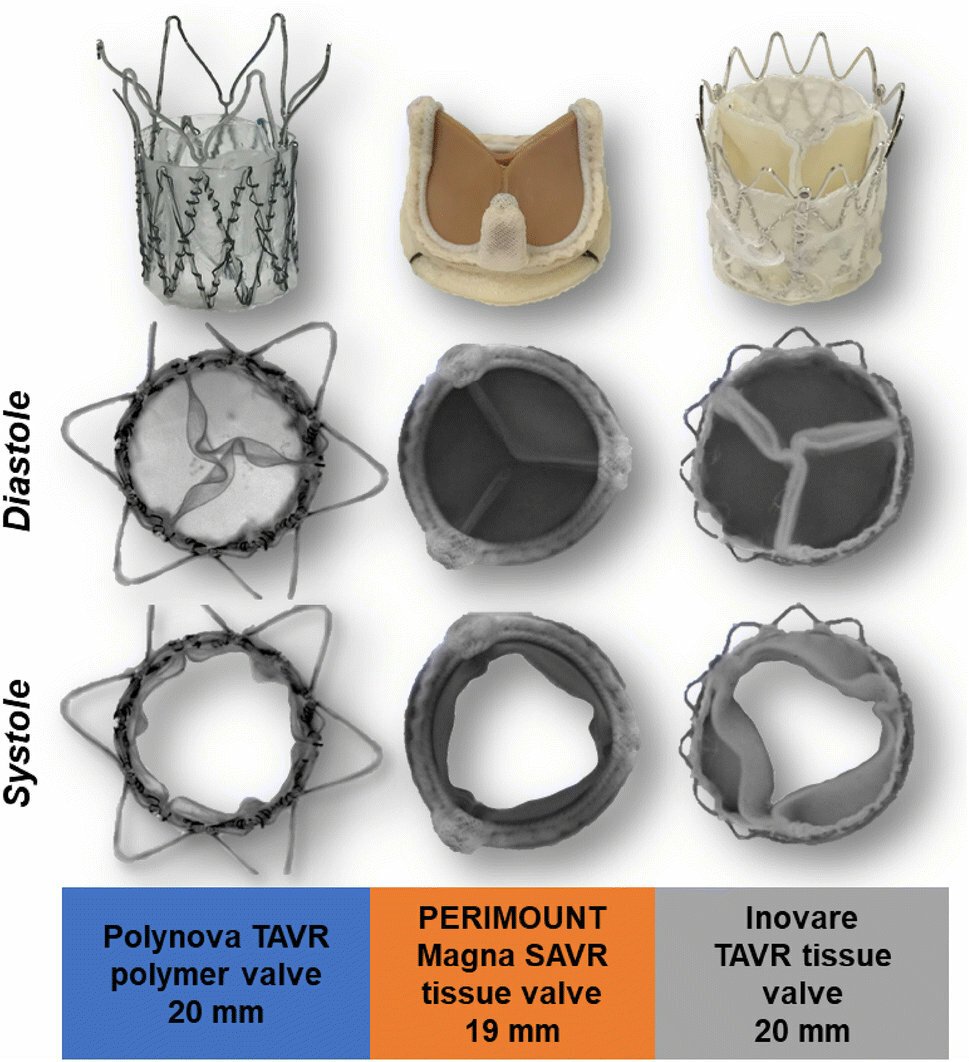 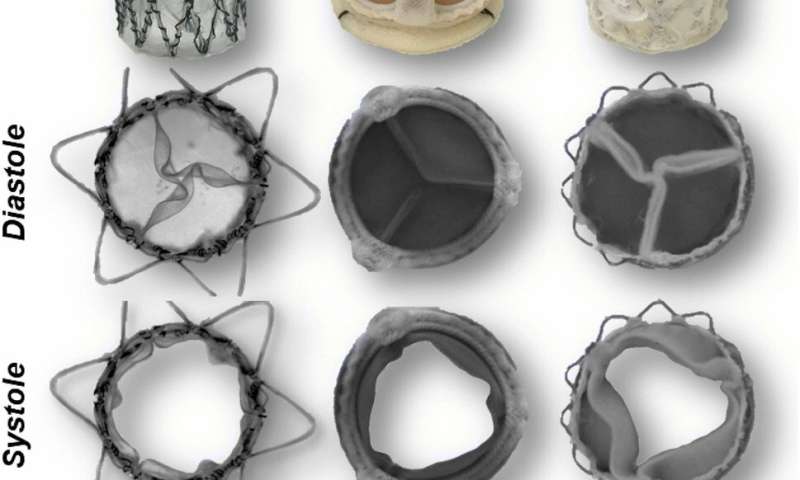 NIBIB-funded engineers are designing and testing aortic heart valve replacements made of polymers rather than animal heart tissues. The goal is to optimize performance of these valves in in an effort to improve outcomes and enable increased use of a minimally-invasive method for valve replacement over the current practice of open heart surgery.

Aortic stenosis occurs when the aortic valve of the heart does not open fully as a result of Calcific Aortic Valve Disease (CAVD). CAVD is caused by calcium build up on the valve and can lead to heart failure. The condition affects more than 2.5 million people over the age of 75 in the U.S. For years, the valves have been replaced through open heart surgery: surgical aortic valve replacement (SAVR). However, increasingly, older patients who cannot tolerate surgery have been treated with a minimally-invasive procedure: transcatheter aortic valve replacement (TAVR), where a new valve compressed into a catheter is guided through a blood vessel and expanded on top of the diseased valve.

As the TAVR procedure and the design of the TAVR valves continues to be improved, more doctors and patients are opting for TAVR over surgery because the minimally-invasive nature of the procedure enables a dramatically decreased recovery time. Recovery from SAVR takes several months, while TAVR patients are typically out of the hospital and able to function normally within a few days.

However, the increase in use of TAVR in younger patients raises a serious issue of the durability of the valves as they are now expected to function for many more years in the patients’ bodies. Longer term studies of TAVR procedures have identified potential degeneration and leakage problems with tissue-based valves currently used for TAVR.

Led by NIBIB grantee Danny Bluestein, Ph.D., Professor of Biomedical Engineering, Stony Brook University, NY, a team of experts in the dynamics of blood flow in the cardiovascular system has designed and laboratory tested an experimental polymer TAVR valve. The group hopes that the use of polymers will overcome some of the problems with long term use of tissue valves, improving the procedure and outcomes so that it can be reliably offered to more patients of all ages, reducing the need for open heart surgery.

“We are able to test the valves in the early stages of development using computer models and with mechanical devices that mimic the heart pumping blood through the valve,” said Bluestein. “Our test systems and computer simulations allow us to evaluate a polymer valve and identify specific structural issues affecting performance. Then, we can make the necessary changes, for example in the shape, flexibility, or other aspects of the polymer that would mitigate problems and increase efficiency.”

Bluestein explained that a key advantage of working with polymers is that unlike tissues, their shape and properties can be changed, allowing problems with devices to be rectified before moving into expensive animal testing.

Adds Grace Peng, Ph.D., director of the NIBIB program in Mathematical Modeling, Simulation, and Analysis, “Dr. Bluestein and his colleagues have been pioneers in combining mathematical modeling and experimental techniques to design and make real improvements in devices used to treat cardiovascular disorders. Their work is an outstanding example of how mathematical modeling and simulation approaches can accelerate the development and increase the reliability of medical treatments and devices that are life-saving for thousands of patients with serious diseases.” 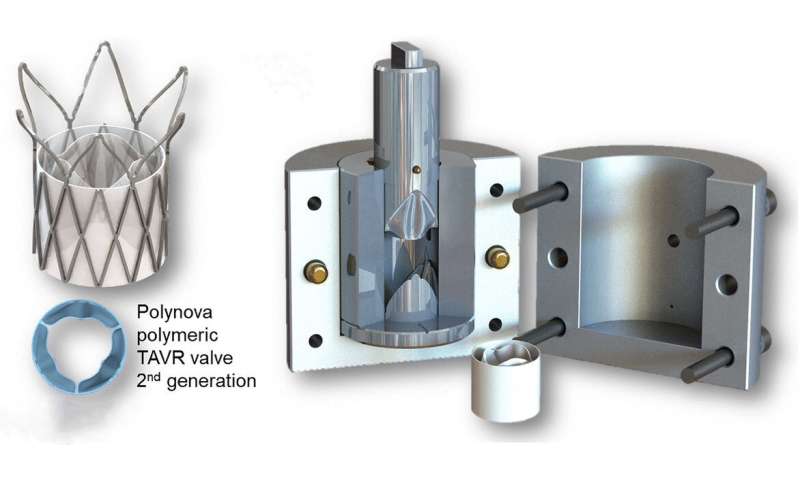 The prototype valve was developed in a collaboration between Stony Brook University and Polynova Cardiovascular Inc., Stony Brook, N.Y. The valve is a TAVR version of a Polynova polymeric valve designed for surgical aortic valve replacement (SAVR). The valve was made by placing pellets of the raw polymer into a mold under heat and pressure for one hour using compression molding. The ability to make valves with molds would allow for mass production and reduced costs compared to animal tissue valves.

The experimental Polynova valve was compared with tests on two valves that are currently in use in patients, the Perimount SAVR used in open heart surgery and the Inovare TAVR used in the minimally-invasive procedure. Both are animal tissue valves. Hydrodynamic tests evaluated how the valves perform as an imitation blood fluid is pumped through them at the same rate as a heartbeat.

In the baseline test, fluid was pumped through the valves to observe how well the valves opened. The size of the opening when the fluid is pumped through is called the effective orifice area (EOA). A large EOA as well as a more rounded EOA indicates the best performance. The EOA of the polymer valve was both larger and more rounded than both the SAVR and TAVR tissue valves.

For the second test the valves were mounted in a 3-D printed model of the aorta of an actual patient. “Patient-specific models are reconstructed from CT scans of candidates for TAVR, using customized computer algorithms,” said Bluestein. “The reconstructed anatomy is then used to simulate TAVR deployment as well as advanced computational studies of fluid dynamics in this ‘virtual patient.’ We can then identify potential problem areas that inform redesign to optimize valve performance.”

In both tests, changes in fluid pressure as it passed through each valve were measured. For all three valves, performance dropped slightly in the patient-specific test compared to the mechanical device used in the first test. This was expected because the variation in the patient’s anatomy puts various pressures on all the valves resulting in shape changes and a slightly less efficient flow. Nonetheless, there were only slight differences between valves in terms of performance in both test environments, which were insignificant.

The final test measured the activation of platelets as they flow through each valve. Platelets are the tiny vesicles in the blood that cause blood clots to form when activated. The Bluestein group has focused on developing implanted valves and heart pumps that are designed to reduce clotting. These implants can cause perturbations in blood flow that activates the platelets and initiates the clotting cascade, which increases the formation of blood clots and the risk of stroke.

Because of this risk, doctors routinely have to put these patients on permanent anti-coagulation medications to avoid dangerous clotting events. However, anti-coagulants have their downside, including prolonged bleeding before wounds are healed—and in the worst case, potential for bleeding strokes. Therefore, the goal of creating devices with a reduced tendency to clot diminishes the need for long-term anti-coagulant treatment.

The results of the clotting tests indicated that the polymer valve was the least likely to activate platelets.

“We believe these initial tests of the polymer TAVR are quite promising, as performance was similar and often better than the tissue valves in this hemodynamic study,” said Bluestein. The group is currently testing other aspects of the valve including durability, stability during and following compression into the catheter that delivers the valve (known as crimping), and susceptibility to the buildup of calcium deposits, which is the main cause of aortic valve disease.