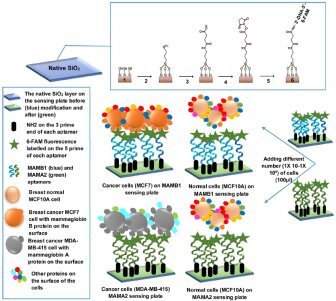 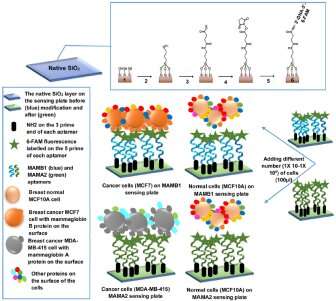 Researchers at Okayama University report in the journal Sensors and Actuators B: Chemical that terahertz radiation can be used to rapidly detect makers for breast-cancer cells. The scientists present a technique that makes use of the binding properties of aptamers, synthetic organic molecules acting as probes for cancer cells.

Breast cancer is the most common cancer in women. Detecting it in time is crucial for treatment to be successful. X-ray screening (mammography) is the standard detection technique but is not without risk as it involves exposure of a patient to ionizing radiation. Another approach for detecting breast cancer cells is based on terahertz (THz) radiation, which is sensitive to polar molecules like water—normal and cancer tissues do not have the same water content. Associate Professor Toshihiko Kiwa (Okayama University, Japan) and Professor Tsuneyuki Ozaki (INRS : Institut national de la recherche scientifique, Canada) and colleagues have now discovered a way to increase the sensitivity of THz radiation for the detection of makers of breast cancer cells, implying that ‘THz chemical microscopy’ could become a powerful alternative screening technique.

The key principle underlying the method of Associate Professor Kiwa and colleagues is that cancer and normal breast cells bind and don’t bind, respectively, to certain molecules known as aptamers. The aptamers consist of (single-stranded) DNA or RNA fragments; they have a high affinity for particular molecules—in the experiments of the team of Associate Professor Kiwa, these molecules were breast cancer cells.

The experimental setup of the researchers involved a sensing plate, consisting of a sapphire substrate, and silicon and silicon dioxide thin films. The aptamers were fixed to the top layer. Irradiating the plate with a specific laser creates charge carriers, the motion of which generates electromagnetic radiation in the THz range. The precise THz response depends, however, on whether the aptamers are ‘freestanding’ (no cells attached) or not (breast-cancer cells attached). The former corresponds to the situation where the sample on the sensing plate only consists of normal cells; for the latter, the sample contains breast-cancer cells.

The scientists noted that the detection method is highly sensitive: the so-called ‘limit of detection’ was found to be as low as 1 cancer cell in 0.1 milliliter of sample. Moreover, a qualitative assessment of a sample seems possible, as the change in THz signal can be associated with the number of cancer cells per aptamer. Although further investigation on the latter association is needed, Associate Professor Kiwa and colleagues conclude that “… the results obtained from this study can be the spark of new evolution in the detection of breast cancer.”

Mammography is the procedure in which low-energy X-rays are used to screen the human breast for cancer. Although it is the standard technique for breast cancer detection, the use of X-rays implies exposure to ionizing radiation. Because there have also been cases of false positives (apparent detection of breast cancer in a healthy patient) and false negatives (missed detections), alternative detection methods are desired. Associate Professor Toshihiko Kiwa and Professor Tsuneyuki Ozaki and colleagues have now reported a promising detection technique, in which a tissue sample is investigated by terahertz (THz) radiation.