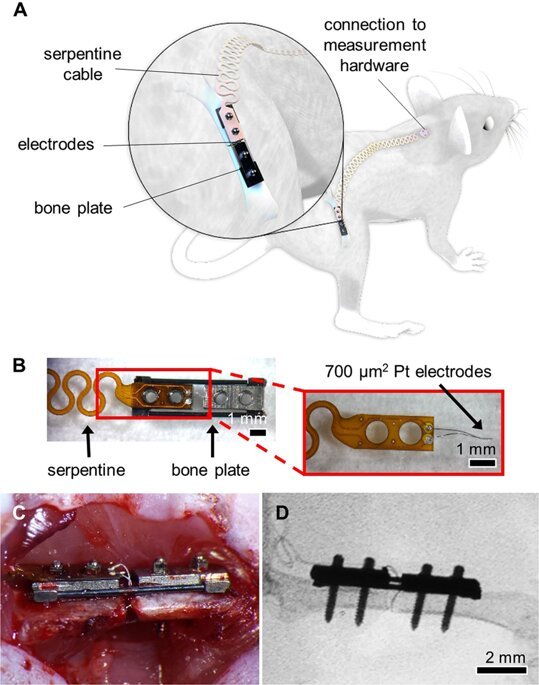 Bone tissue engineering (BTE) is an evolving field at the intersection of materials science and bioengineering, focused on the development of bone substitute materials and diagnostic methods in orthopedics. At present, physicians rely on X-rays to assess fracture healing, which are more useful at the latter stages of bone repair. Accurately determining the process of bone fracture repair is a fundamental clinical requirement in orthopedics, but standard methods to assess fracture union remain to be developed.

In a recent study, Monica Lin and co-workers at the departments of Bioengineering and Orthopedics at the University of California, San Francisco (UCSF), used in vivo mouse fracture models to present primary evidence of microscale smart bone plate implants. These implants were able to monitor post-operative fracture healing with high sensitivity using electrical impedance spectroscopy (EIS) integrated to track the the healing tissue. The scientists fixed mouse long bone fractures with external fixtures and bone plates containing the sensor for the first time in an experimental study in the lab. The results are now published in Scientific Reports.

In the study, Lin et al. conducted EIS measurements across two microelectrodes in the fracture gap, to track longitudinal differences in mice with good versus poor healing. The scientists presented an equivalent circuit model combining the EIS data, to classify the states of fracture repair. Their measurements strongly correlated with standard qualitative X-ray microtomography (microCT) values, allowing the frequency-based technique to validate clinically relevant operating frequencies. The results indicated that EIS can be combined into existing clinical fracture management strategies such as bone plating. The process developed in the study can ultimately provide physicians quantitative information on the state of fracture repair in patients to guide clinical decision-making. 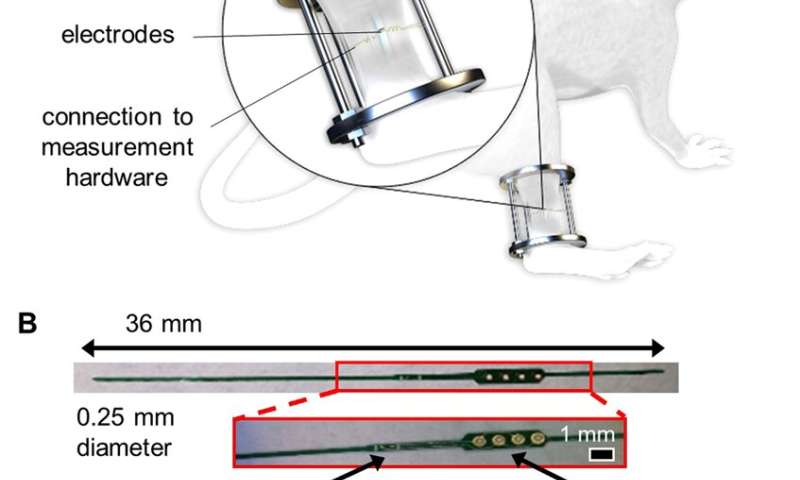 Musculoskeletal injuries including bone fractures are highly prevalent in the United States. Fracture treatment represents a significant burden on the U.S. healthcare system. To conduct accurate clinical decisions on fracture healing; it is imperative to determine how well a fracture is healing. Since a standard method to assess fracture union is still lacking, two of the most common methods at present include radiographic imaging and physical evaluation. While computed tomography (CT), dual X-ray absorptiometry (DEXA) and ultrasound can offer improved diagnostics, their clinical use is limited due to cost and the higher dose of radiation. As a result, patients rely on physical examinations by a physician, but the results are subjective and prone to imprecision. The biological process of fracture healing proceeds via two pathways; intramembranous (direct) and endochondral (indirect) ossification.

Early stages of fracture repair are not typically detected until the stage of bone mineralization. As a result, developing techniques to monitor fracture healing onset is an active area of academic research. Most studies have focused on mechanical feedback that correlates strain measurements to bone strength. In the present study, Lin et al. built on previous studies to use electrical techniques that can characterize fracture repair progression. The basis of their work was on the analogy that biological tissue can be electrically modeled as a combination of resistive and capacitive effects. The ion-rich intra- and extracellular matrices conduct charge as resistances, while the double-layered cell membranes can be modelled as capacitances or constant phase elements (CPE). 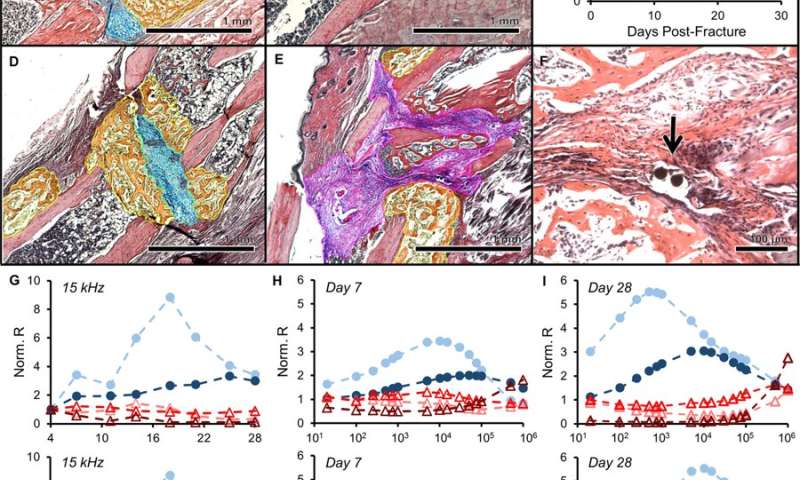 The scientists developed and tested microscale EIS sensors designed to measure electrical properties of the fracture callus longitudinally during healing in two mouse fracture models. The two models were implanted either with bone plates or external fixators. The work by Lin et al. is the first study to implant microscale sensors directly into the fracture gap for local measurements of the changing callus. They found that the frequency spectra of impedance measurements were robust, correlating with quantified measurements of bone volume and bone mineral density.

The long-term vision of Lin et al. is to use the EIS sensors to quantitatively monitor the progress of healing with regular measurements at the site of fracture to assess risks. The potential to implement smart implant systems and provide physicians with personalized patient information is favorable, since the global orthopedic device market is expected to reach $ 41.2 billion by 2019. The study provided a proof-of-principle concept to support the feasibility of EIS as a cost-effective and simple strategy for clinically relevant information during patient fracture management. 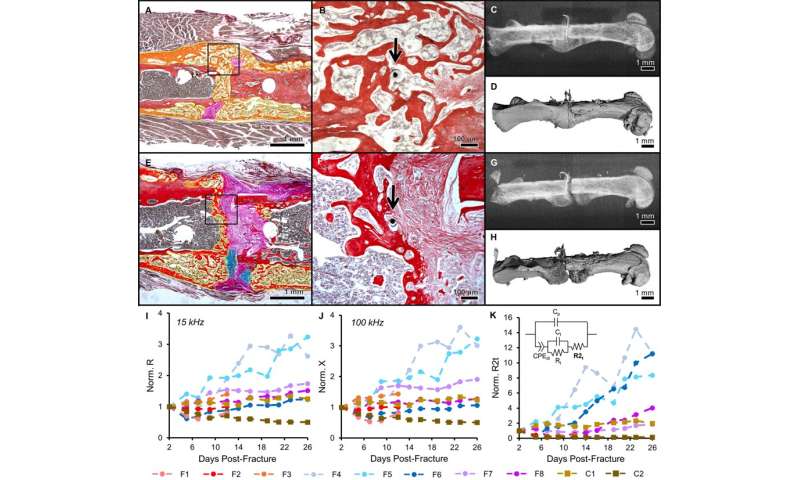 In the experimental design, the scientists first developed the sensors, mouse models and the operation procedure. They then determined the scope of healing to form euthanasia time points to access information on the callus composition via histology staining thereafter. Due to the small size of the sensors, the scientists could confirm tissue composition across the entire fracture gap and identify the exact tissue the sensor was embedded in. Although sensor motion in some samples contributed to excess fibrosis, histological evidence showed that microscale electrodes were well integrated in the fracture tissue. When immobilized appropriately, the implanted sensors did not prevent complete bony bridging. Thereafter, the scientists measured the impedance of the changing fracture callus across the course of healing in the mouse model.

The impedance between mice that healed well and those that healed poorly deviated quickly in the study. The scientists obtained impedance spectra across days of healing by varying the frequency from 1 kHZ to 100 kHZ in the experimental setup, such that robust callus formation influenced the measurements. Lin et al. measured the electrical resistance (R) and reactance (X) in the mouse models to show that the parameters rose faster for well-healed fractures. Resistance (R) rose sharply in mice that exhibited a clear healing response, since it reflected the ability of a material to conduct charge. A highly conductive material exhibited a small resistance, while a less conductive material had larger resistance. In the study, the scientists observed a transition from highly conductive blood and cartilage tissue, to the less conductive trabecular and bone in the mouse bone fracture model to thereby indicate a clear healing response. 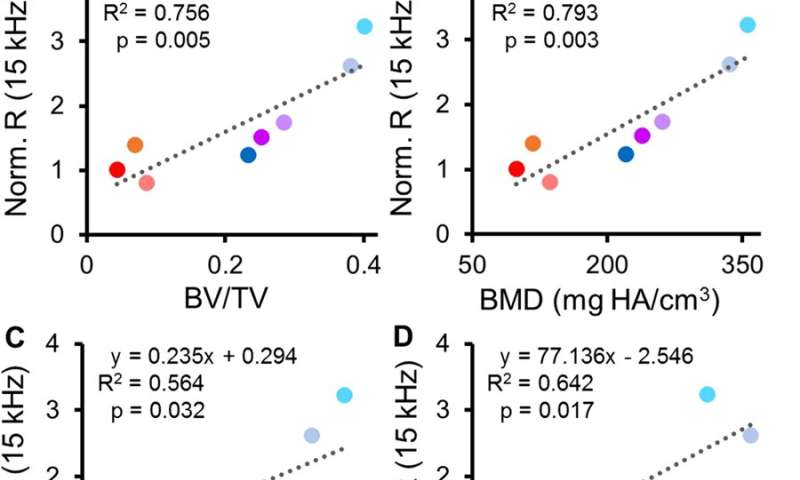 Lin et al. then measured the reactance (X) in the study as the capacity for energy storage, where cellular tissues had higher capacity and therefore larger X at higher frequencies. Since bone contains capacitive matrix layers and highly cellular marrow, they observed an acute rise in X in mice healing with bridging calli in contrast to moderate changes in mice with poor healing. The results agreed with previous studies in cadaveric and ex vivo mouse models.

The scientists comprehensively compared the phases of fracture healing with existing methods to show that the measurements closely matched. They fit the data into an equivalent circuit model to combine the effects of resistance (R) and reactance (X), obtained at varying frequencies throughout the study. In total, Lin et al. presented complete analyses in the study with histology, radiography and microCT techniques, to validate high sensitivity of the local EIS measurements. The study showed the value of integrating EIS with external fixators and bone plates in different mouse models, with different rates of progressive healing.