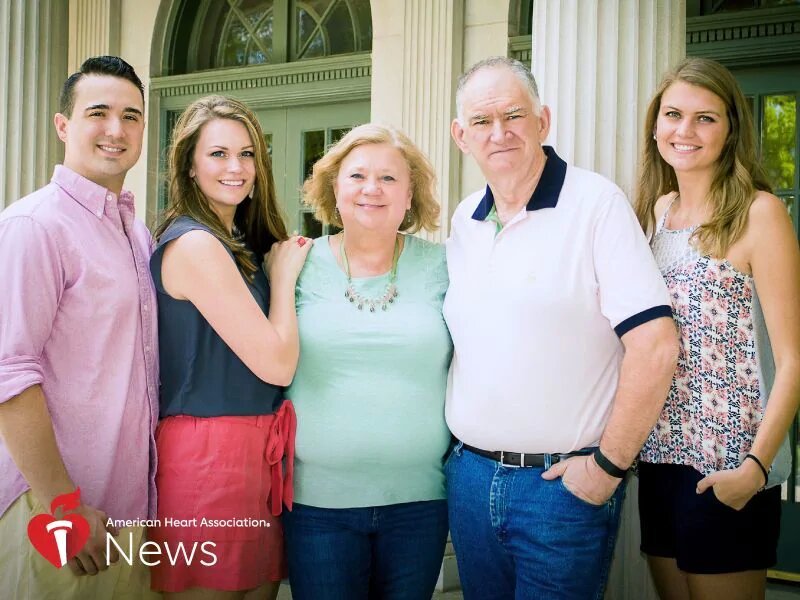 Although she was recovering from shoulder surgery, she told her dad she wasn’t about to miss the opportunity to join him at the Heart Walk in Tulsa, Oklahoma, along with her mother, Dorothy, and older sister, Emilie Martin.

For more than five years, various members of the Harris family had participated in the 5K event put on by the American Heart Association. But in 2017, it became more personal.

Glenn, then 58, had faced a condition that resulted in him receiving a pacemaker to regulate his heartbeat and a defibrillator to deliver an electric shock to restore a normal heartbeat if his heart ever beats chaotically and much too fast.

In 2018, more than 65 people joined the Harris family for the Tulsa Heart Walk. Only this time, the team had a different name and cause: Walking for Lauren.

In a bitter irony, Lauren’s only experience with heart disease had been as a caretaker, not as a patient.

Glenn’s arduous recovery and rehabilitation occurred just as Lauren graduated from the University of Denver. She didn’t have a job yet, so she looked after her father. First, she tended to him in the hospital. Later, she took him to medical appointments and helped him adjust to an outpatient cardiac rehabilitation program.

Perhaps her greatest gift was helping Glenn calm his mind.

“After all my heart problems, I was having PTSD, jumping at every sound or movement,” he said. “Lauren minored in psychology and she understood a lot of the psychological side of what I was going through, how bodies react to stress. Her positive reinforcement really helped.”

Only after Lauren was convinced that her father was on the road to recovery did she return to Denver. She worked as a nanny while figuring out her next steps, which likely would have included law school and nonprofit work.

Although they lived 700 miles apart, they all stayed tightly connected.

“Lauren would call me from the grocery store in Denver and say, ‘I don’t know what to eat tonight,'” said Emilie, 27, a neonatal nurse. “We’ve been close since she was born. She was my world.”

On Thursday, Feb. 15, Glenn and Dorothy talked to Lauren and caught up on the latest news.

“We just had a good ol’ chat, nothing special,” Glenn said.

That Saturday, Glenn was home while Dorothy was running an errand.

“The doorbell rang and it was two police officers,” he said.

“Are you Glenn Harris?” they wanted to know. “Do you have a daughter named Lauren?”

“Is she alive?” Glenn asked.

When Dorothy returned, he had to tell her the worst news of their lives—that their seemingly healthy and active daughter had gone into cardiac arrest at her apartment. She was found by her roommate. An autopsy concluded the cause was ARVD.

“The last time we saw her was New Year’s Eve 2017,” Glenn said. “She was flying back to Denver. I still see it every day—that image of her walking through airport security and turning around and waving.”

With the Tulsa Heart Walk only two months away, the family knew they would dedicate it to Lauren. Emilie created “Walking for Lauren” T-shirts with the slogan “Follow Your Heart,” because, she said, that’s what Lauren did.

Several of Lauren’s friends from Denver came for the Tulsa walk. Lauren’s closest friends from Tulsa traveled to Denver for the walk there in June. For the Denver walk, Glenn channeled Lauren’s spirit to complete the extra training required for the mile-high altitude. The family also organized teams for Heart Walks in Austin and Fort Worth, two Texas cities Emilie has connections with.

They are planning to organize more and larger Walking for Lauren groups at 2019 Heart Walks.