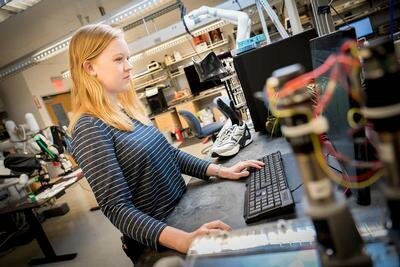 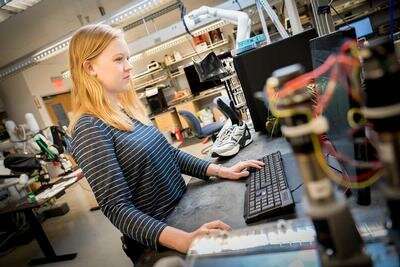 Robots powered by human-like artificial muscles are still in the research and development stage, but Taylor Henderson is certain that they’ll change the future of prosthetics.

Henderson is an electrical and computer engineering (ECE) master’s student in the Advanced Robotics and Controls Lab at the Jacobs School of Engineering, studying under the direction of Michael Yip, a professor in the ECE department.

“Most robots are able to move thanks to motors or bulky friction-filled devices,” Henderson said. “There’s a push in more recent years to use more biomedical-compliant actuators, which are safer, lighter, more flexible and fit better with the human body.”

Henderson’s inspiration to study and improve the field of prosthetics came from her father and his friends. Her dad was a Major in the Marine Corps and Henderson grew up bearing witness to the sacrifices that men and women in the armed forces made, including, for many, their limbs. Seeing the importance of prosthetics in their lives, coupled with her love of math and science, led Henderson to pursue a bioengineering degree as an undergraduate at UC San Diego.

She started conducting research in Yip’s lab as a sophomore. Henderson said she’s been lucky that he’s been a supportive advisor in her research endeavors. She worked with him on optimizing artificial muscle actuators during her undergraduate years and studied under him for her senior design project. For that project, she added a stiffness-varying component to an ankle and foot orthotic brace for patients with lower limb trauma. Her attachment could vary the stiffness of the brace based on the activity the patient was doing, so that forward motion pain would be minimized. The patient is able to change the stiffness of the brace based on whether they’re walking, running or doing other movements, which previously wasn’t possible and made switching between different movements very uncomfortable.

The project was done in collaboration with the Navy Medical Center at Balboa Park, and resulted in a part-time position working on similar efforts.

Artificial muscle actuators are materials or devices that mimic natural muscles and can reversibly contract, expand, or rotate as a result of an external stimulus such as voltage or pressure. They can be used individually or combined together, and have a high degree of flexibility and versatility.

There are two main types of actuators: one is synthesized from a material similar to fishing line or sewing thread, and another type uses metallic alloys that can be deformed and returned to their original shape after heat exposure. Learning how to design these actuators takes many years of study and practice, and as a result, most students and researchers have little opportunity to work with them. Henderson sees this as a challenge she can help solve.

Her current project aims to lower the barriers of entry for others—including researchers, students and hobbyists—to fabricate muscle actuators. She’s working to create an algorithm that uses supervised learning to model actuator configurations and return a specification that best helps the user fabricate their device.

Developing the algorithm is challenging. Without lots of data for modeling, Henderson must dig through hundreds of journal papers to find the values for properties like strain and stress that are needed for an algorithm to properly design an actuator configuration.

“It’s one thing when you have a whole big data set and try a bunch of different analysis techniques to see what works best, but we don’t have that yet. It’s been slow going,” Henderson said about the work.

Henderson enjoys being able to devote more of her time to research as a graduate student.

“I like that. It’s a bit less focused on class and more focused on research, and it’s been really good for me.” Henderson said. She also gets to mentor undergraduate students, which she enjoys.

“I’m excited to be the lead on a project. I’ve only had undergrads working on that with me for a short while, but it’s been great to see their growth and see them where I was two or three years ago.”

While she’s enjoyed serving as a mentor and advisor to undergraduate researchers, Henderson hasn’t decided yet whether she wants to pursue a career in academia or industry. She does know that she’s excited to see how upcoming research on the brain and advances in machine learning can be used to benefit the field of prosthetics.