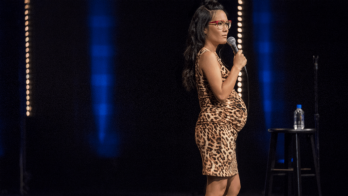 For the past 15 years, Ali Wong has been performing at open mics with the purpose of making people laugh — and making them uncomfortable. “It was very disgusting. It was all about sex. I had moved back from Vietnam and was single, living in San Francisco, and so horny,” she said in an interview with Health.com about her early years in comedy. This candor and openness are what led to her Netflix specials, Baby Cobra and Hard Knock Wife — both of which she filmed while she was *very* pregnant. More importantly, these traits have also allowed the American Housewife star to speak publicly about her miscarriage and two C-sections.

“I was shocked nobody was trying to talk to me about my gender or my race, which I loved,” she said in the interview. “Everyone wanted to talk about me being pregnant and how I spoke about my miscarriage.” But, if you listen to her stand-up, you’ll know that she doesn’t ask for sympathy when she speaks about her bodily struggles — she just wants to educate people (with humor, of course) about the reality of something that happens to 1 in 4 women.

Very proud to be raising my daughters around all of these creative and soulful Asian Americans. I want them to grow up with a strong sense of pride and know that people who look like us are capable of so much. Plus I can’t believe I got @DavidChoe to give my kids a free art class!

“I didn’t realize miscarrying was a thing that could happen. That’s why I told everybody. I told the lady who cleans my house, and when she found out I was seven weeks along, she told me I shouldn’t be telling people. Now I know why. It’s because then you have to tell everyone the bad news. Some people have insensitive reactions. Like, they will ask if it’s because you had sushi or you were performing too much. They want to point to some cause and don’t realize how bad that makes you feel,” the mother of two explained. When Wong started talking about her miscarriage, she was afraid that her husband’s parents would be disappointed, but that thought quickly dissipated once she realized how supportive they were.

As for her C-sections, she acknowledges that she may never fully accept her scars but can still appreciate the stories behind them. “I’ve had two C-sections — I’d show you, but I don’t want to get Me Too’d. But if I am naked, you can see my belly is a little lopsided over my scar. I have a keloid thing that runs in my family. Some women will have scars that look like little strings of floss. Mine looks like a finger. It bummed me out for a while, until one day, I was like, “It is what it is. I got two beautiful girls out of it.” I’d like to say it’s a celebration of my body, but if I am being truthful, it’s not — it’s just that it doesn’t bum me out anymore.”

Aside from Wong’s current The Milk and Money tour, the comedienne wrote a book filled with letters to her daughters called Dear Girls, which is out October 15. “So my book is a lot about who I was before I had them,” she said. Moms, take notes — your daughters can probably use a book of their own someday with stories of your rebellious years (which, for Wong, doesn’t seem to be ending any time soon).