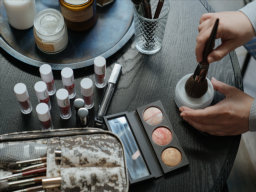 One of the most important jobs parents have is instilling confidence in their children. We do this in all sorts of ways (like making sure they know how much we value what they have to say), but one tried-and-true method is teaching our children that looks aren’t everything. Unfortunately, it sounds like one mom missed that memo, according to her husband who posted their story to the popular AITA subreddit.

What Parents Need to Know About Sexual Abuse: Talk to Your Kids to Keep Them Safe

User AITAMUA posted about a recent experience that he had with his wife and their 2-year-old daughter, whom he called Z for the purpose of his post. “My wife loves cosmetics,” the dad wrote. “She’ll practice a lot and says she’s even thinking about starting a MUA (makeup artist) business.”

Apparently, AITAMUA’s wife had been talking about wanting to practice her craft on Z for a while, which he said he was cautious about, but didn’t mind as long as Z wasn’t getting a full face of makeup every day. His wife agreed to their terms and went about testing her skills as a makeup artist on their daughter.

OP says he realized something was wrong the very next day when he heard his daughter “whimpering” in her room. “She had a really bad rash and blistering in her face, her left eye was swollen, her skin was very irritated, and she kept scratching making it more irritated,” he wrote. “I quickly got us both dressed and rushed to the doctor’s office, and it ended up being ‘contact dermatitis.’”

For those of you who don’t know, contact dermatitis is the broadly used term for an allergic reaction on the skin. OP says his wife returned home an hour after their doctor’s appointment excited to give Z another makeover, and had even bought new products to try.

“I confronted her and demanded that she tells me what did she put on Z’s face,” the concerned dad wrote. “She admits to me that it was a full face of makeup while I was at work and that they even went out to the park so others can see her talent. I called her crazy and irresponsible because now our daughter has contact dermatitis and that she broke our agreement.”

The wife got upset over being called irresponsible and lashed out at him, telling him that she was only trying to “make her look pretty” and instill a passion for makeup that they could share.

Much like the way we picture little Z’s makeover went, this post has layers. First, we want to address the statement that this mom put their 2-year-old in makeup to make her look pretty. Kids don’t need makeup to look pretty, and we’re really hoping that Z didn’t overhear her mom saying that, because it’s those kinds of comments that fill kids with insecurity.

Secondly, this dad and his wife made an agreement and she broke it the very next day making us (and we’re imagining OP as well) question what other trust she’s broken over the course of their relationship.

As it turns out, we’re not the only ones who took issue with these facts. The commenters on Reddit echoed our sentiments and more in their responses. “

The ‘she was only trying to make her look pretty’ part makes me see red,” wrote thisleandpeony. “This woman thinks her baby is ugly and put makeup on her to make her more attractive. That’s messed up. Her daughter is going to end up with so many body image issues thanks to her shallow mother.”

And user coconutville agreed, saying, “The emotional damage of being made ‘pretty’ is so long lasting. If your wife needs a model so bad, why doesn’t she volunteer at an old folks home or work with a charity like look good feel better. Your daughter is not a toy for your wife to use for her own pleasure.”

User Effective_Solai also brought up the point that at that age, makeup can actually be dangerous for young children since their immune systems are still developing. “She needs to understand that this is dangerous. Next time it might not be just a case of contact dermatitis but MRSA, a skin infection or a severe allergic reaction,” they wrote. “And she broke your trust while at it.”

Listen, a super exciting part of being a parent is getting to share the things you’re passionate about with your kids. So, we can see the underlying urge for OP’s wife to share her love of makeup with her daughter, within reason during playtime, while making sure none of the products causes sensitivity. Going out all the time with a fully done face is not age appropriate. Nor is it within the guidelines both parents agreed to upfront. We’re with the rest of Reddit on this one, dad is totally in the right.

These celebrity moms may use weed to help them with that daily juggle.