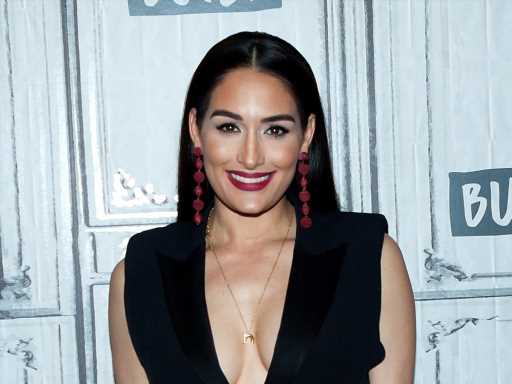 Even someone as successful as Nikki Bella battled with postpartum depression, like so many other mothers experience.  And when celebrities like her shared their story candidly, it helps everyone else know they’re not alone. In a new episode of Total Bellas, we got to see one of the ways Nikki’s PPD manifested, as she watched fiancé Artem Chigvintsev spend so much time with his dance partner Kaitlyn Bristowe while she stayed home with their newborn son, Matteo.

“I just feel confused ’cause I’m a new mom and, for some reason, thought I can handle it or do it all,” Nikki told sister Brie in the episode. She continued to share that being a new mom, it was extremely difficult for her to watch Chigvintsev enjoying his time away from her while she was “going through so much.”

In tears, she added, “There’s a part of me that wants to discipline him for it. It’s been so fucking hard. I’m trying to keep it together and … I’m about to lose it. I’m about to have a massive breakdown.” Her depression reached a point where even Nikki’s doctors expressed concerns about her wellbeing. “The highs and lows are so extreme,” Nikki shared.

It turns out Nikki wasn’t actually jealous of Bachelorette alum Bristowe, but more of the time Bristowe was able to spend with her fiancé.

Though Brie advised her sister to talk to her fiancé and be honest, Nikki said she didn’t want to give her partner a “hard time” being that she had encouraged him to “fight for his dreams.” We know that eventually she was able to communicate what she was going through. It’s all part of the Bellas’ self-care journey in this roller-coaster of a year.

As for Bristowe’s reaction to Nikki’s honesty on the reality show? She’s actually a huge fan.

“Podcasting with Artem today!!!!! Did you guys watch #TotalBellas last night? Ahhh I give so much credit to Nikki. She’s a real life super hero. It was hard to watch because I felt awful and just can’t imagine how hard that was. Let me know any questions you have for Artem! #dwts” Bristowe wrote on Twitter.

We’re glad that Nikki chose to share her story, and we know it will resonate with so many new mamas as well.

Read about how Heidi Klum, Angelina Jolie, and more celebrity parents co-sleep with their kids.