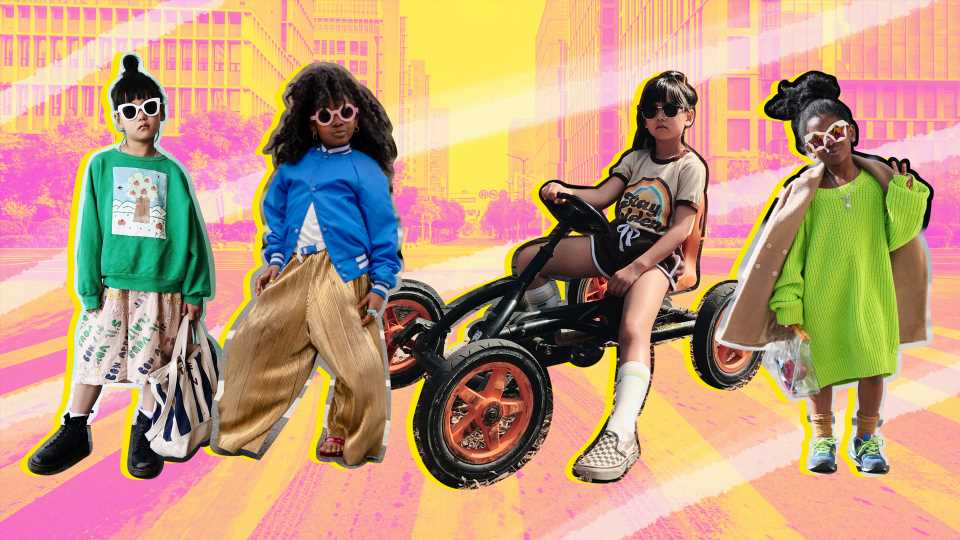 They’re young. They’re adorable. They’re more famous than most of us will ever be. Kid influencers — or, kidfluencers, as we like to call them — are popping up all over the internet, and they’re redefining the world of advertising. The online influencer market is booming, and research from MediaKix estimates that companies will spend $5 to $10 billion paying influencers for sponsored content by 2020. And, while big brands love swooping up celebrity partnerships, they’re also learning that kids are great for pushing the hottest kids’ toys, clothing, and experiences. After all, what slime-loving kid wouldn’t want to test out the latest gooey toy after watching videos of other kids having a sticky blast?

It seems there’s a niche for everyone, too. Style-savvy social media users adore accounts like Call Me Sparkle and Zooey in the City, which celebrate the sparkly, colorful world of sophisticated kids’ fashion, while outdoor adventurers spend hours scrolling through Hawkeye Huey‘s stunning snapshots.

To some, these accounts seem like a great way for kids to show off their personalities and interests while getting the chance to make some extra money (some parents create accounts or trusts for their kids). However, not everyone views these accounts favorably; some even accuse parents of exploiting their children for financial gain or robbing them of their identities. Still, many of the prominent kid influencers seem to enjoy what they do — especially when it means rocking their signature styles or testing out new toys.

Ahead, we’ve gathered 10 of the hippest kid influencers you need to know. (And, don’t worry. We won’t judge you if you steal some style inspiration from their accounts.)

This pint-sized fashionista is only five years old, but she’s already serving up some of the hottest looks on the East Coast. Sparkle, whose real name is Summer, has been modeling her stylish looks since she was two, during which time she’s amassed a large following (her Instagram account boasts more than 27,000 followers). Sparkle’s account features darling snaps of her wearing runway-ready outfits, featuring the cutest leather jackets, jumpsuits, sunglasses, and faux-fur coats you’ve ever seen. She even collaborated with womenswear brand Fe Noel on the Sparkle Gold Pant, a pair of gold lame wide-leg trousers explicitly designed for kids, as part of the company’s “Dream In Color initiative,” which supports women and girls of all ages in their entrepreneurial endeavors.

Sparkle’s career has been quite successful. She’s a model (repped by Los Angeles-based talent agency Abrams Artists Agency), is gearing up to launch a product line, and rakes in about $3,500 a month off of her posts, according to Fast Company, who spoke with Sparkle’s mother and manager, Simone Gittens. Though Sparkle is bringing in cash and clicks, her mother told FC that she’s remained humble and often donates portions of her income to her church’s charitable causes. Gittens also said it’s essential that, in addition to giving, Sparkle learns the importance of saving money early, so she’ll be prepared for adulthood.

Zooey in the City

When it’s Sunday morning and bae says let’s go to the Farmer’s Market ??????

Zooey Miyoshi, best known by her Instagram handle @ZooeyintheCity, is a seven-year-old fashion sensation who splits her time between Tokyo and Los Angeles. This mini-influencer is all about style and often posts her favorite #OOTD (that’s “outfit of the day,” for those of us who are a bit less fashion-savvy) pics with her 143,000 Instagram followers. Throughout her feed, you’ll find Zooey donning large glasses, tulle skirts, vibrant dresses, and too-cool denim jackets with patches all while eating ice cream, attending movie premieres, or visiting Disneyland. Yes, it’s OK to be a bit envious.

Of course, Zooey has a bit of help. Her mom, who was once dubbed “Tokyo’s #1 party girl,” runs her account and helps curate her wardrobe, and her dad works in the fashion industry.

Ryan Kaji, known by his YouTube channel name, Ryan ToysReviews, is one of the most popular kid influencers in the game. At just seven years old, he already has 19 million YouTube subscribers, and his channel has more than 29 billion views — yes, billion.

Ryan’s videos center around some of his interests, including monster trucks (he and his dad even documented their time at the Monster Jam), Legos, superheroes, Disney, and trains. Additionally, he shoots educational videos which answer questions like, “Why Do We Cry?” and how to make healthy food choices. Forbes estimated that Ryan made about $22 million between June 2017 and June 2018, making him the year’s most profitable YouTube star, period.

He became so popular that Nickelodeon Jr. picked him up for a new series, Ryan’s Mystery Playdate, in which Ryan and his parents run through a set of challenges and solve puzzles. The show, which debuted in April, has been such a hit that Nick Jr. already picked it up for another 20-episode season. Make room on the Hollywood Walk of Fame; Ryan’s destined for big things!

We love our new pet Fable! He’s our best friend. Did you see our cute reaction meeting him for the first time, link in our bio ? . . @nolafontanezphotography @michellerogers_styling

Taytum and Oakley Fisher are social-media superstars. The identical twin girls have more than 2.7 million followers — and they haven’t even celebrated their third birthdays. Both Taytum and Oakley were destined for fame. The girls’ parents, Madison and Kyler, are both actors and have helped the twins land roles in the soap opera Days of Our Lives. Additionally, the girls make appearances in their family’s YouTube channel, which has more than 3.3 million followers.

In case you were wondering, yes, these two-year-old influencers make more money than you. According to Fast Company, Taytum and Oakley often receive between $15,000 and $20,000 per paid Instagram post; The New York Times reports that number skyrockets to $25,000 to $50,000 for content posted to YouTube. But striking cute poses isn’t the only thing these two are good at doing. Taytum and Oakley are now mastering their new roles as big sisters to their two-month-old sis, Halston. They’re doing a great job, too. Little Halston is already charming the camera and has 426,000 Instagram followers.

With more than 6 million followers, EvanTube HD is one of the most-watched kids on YouTube. For eight years, he’s created fun videos with his family centered around toy reviews, silly challenges (wait until you see him create slime), pancake art, and walkthroughs of live events, like the 2019 Toy Fair. If video game clips are more your style, Evan also has a gaming channel, EvanTubeGaming, where he plays Minecraft and Fortnite.

Evan’s parents, who go by MommyTube and DaddyTube (yes, really), are highly involved in his channel and promotion. They make frequent appearances in his videos and manage his social media profiles on Instagram and Twitter, as well as star in their own channels, The Tube Family and DTSings, in which DaddyTube and company share their musical talents.

Of course, Evan’s not the only kid in the family worth following. His sister, Jillian, also has a YouTube channel, JillianTubeHD, where she sings, posts makeup challenges, and reviews toys.

We made it into Coachella!! ? @gogetglitter

Chances are someone has sent you a video of Mila ripping apart the gym (“people running and not getting anywhere”) or dragging her “babysitter.” She’s sassy, witty, and hilarious. Just reference her recent Game of Thrones takedown for proof.

While Mila is the star in most of the Stauffer family YouTube videos and Instagram posts, she’s not the only one getting camera time. Her twin sister, Emma, also makes regular appearances; though, the girls’ mother, Katie, told BuzzFeed Emma is typically a bit more camera-shy. Recently, though, the sisters have both had the opportunity to show off their style, as they designed a line of toddler clothes for Target. At just four years old, the Stauffer girls are guaranteed to make people smile for years to come.

@HawkeyeHuey isn't afraid to jump into outdoor adventure! Maybe that’s because we started making some pretty wild trips with him as soon as he could walk, like roping him up to rock climb at the age of 2! We’ve been enjoying the outdoors as a family from kayaking to skiing or just a good hike ever since. Join us this summer as we partner with @ACE_Brand Elastic Bandages for National Get Outdoors Month and ACE Brand’s 100th anniversary to encourage other families to get outside! #ad

Prepare to have some major travel envy. Hawkeye Huey is the nine-year-old photographer who documents his nationwide travels and adventures on his Instagram account. He’s got quite the role model, too; his father, Aaron Huey, is a professional photographer for National Geographic. Huey also lends Hawkeye his camera and manages his account, which currently has over 200,000 followers.

In addition to snapping stunning photos (seriously, he puts all of our #nature pics to shame), Hawkeye sometimes accepts paid partnerships with brands like Ace Brand and Target.

It’s National Siblings Day in case you didn’t know! I have 2 sisters that are my best friends in the world and I’m pretty sure these two feel the same about their friendship too! #nationalsiblingsday#bestiesforlife

You’d be hard-pressed to find a more stylish brother-sister duo than Stella and Blaise. The two Southern California cuties rock big blond hair and even bigger personalities on both their shared Instagram account and YouTube channel, which boasts more than 65,000 followers combined. Both kids have adorable beach-town styles and are often pictured with shiny sunnies, sundresses, and boardshorts, perfect for L.A.’s warm weather. (Though, their fall and winter outfits are worthy of any New York Fashion Week runway.)

Their online fame has paved the way for some pretty cool opportunities, too. The Blaise kids, who are represented by The Osbrink Agency, get to go to movie premieres and after parties (they even met Kelly Clarkson and Pitbull at one event) and work with brands like Dole, Hello Fresh, Got Milk, and Quip. They even promote films such as Spider-Man: Into the Spiderverse and How to Train Your Dragon.

Gabe and Garrett love all things action. The 13- and 10-year-old brothers joined YouTube back in 2010, and have since attracted more than 1.6 million loyal followers who watch their unboxing videos, Sidewalk Cops series, superhero content, and all of their outdoor adventures. Kids love watching things like “Top 5 Toys Picks” — and so do brands, who invest in Gabe and Garrett’s following through paid partnerships. So far, the guys have worked with Legos, Nintendo, Hasbro, Nickelodeon, and toy company MGA Entertainment.

If you’re looking for gift inspiration for sporty kids, look no further than their channel.

Move over Mary-Kate and Ashley Olsen, the McClure twins are here to take the spotlight. Alexis and Ava are five-year-old fashion queens whose love for bold colors, floral prints, and each other makes Instagram a much happier, and cuter, place.

The twins model for kids’ companies like Rookie USA, star in ads companies like Facebook, and make YouTube videos. Additionally, they get to travel to gorgeous vacation destinations in paid partnerships with tourism businesses like Visit Florida. Last year, BET invited the McClure girls and their mother to Black Girls Rock, an event devoted to celebrating women and girls of color and providing them with opportunities in the arts.