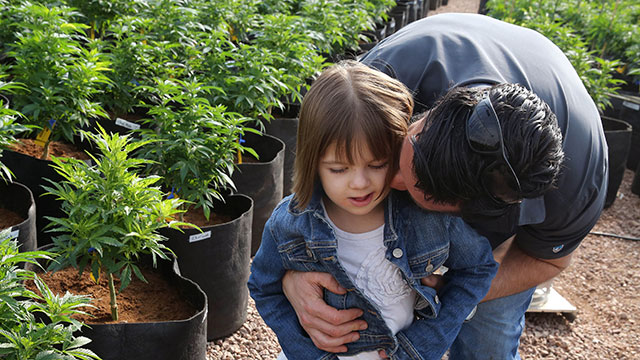 Each news of a death likely caused by COVID-19 is a tragedy. But one that occurred this week is hitting us particularly hard: Charlotte Figi, who died at age 13 on Tuesday. She was the girl whose severe epilepsy helped spawn the development of medical CBD treatments and even had a marijuana strain, Charlotte’s Web, named after her. Her mother, Paige, wrote about their incredible fight for her life here on SheKnows earlier this year, and our hearts are hurting so much for her now.

“Charlotte is no longer suffering,” read a Facebook post from Paige on Tuesday. “She is seizure-free forever. Thank you so much for all of your love. Please respect their privacy at this time.”

Charlotte was diagnosed with Dravet Syndrome at a very young age, after her relentless seizures began at just 3 months old. Her mother spent years letting doctors put her on various medications that failed to mitigate the seizures, and she eventually began to research medical marijuana. Regular strains with high THC content didn’t work, and this was before cannabidiol had been widely researched or hyped.

“Charlotte’s seizures were every half hour around the clock: 50 grand mal seizures per day,” Paige wrote in January of what her daughter’s symptoms were like at age 5. “Any precious few conscious moments she experienced were spent crying. I stopped visiting dispensaries, stopped buying bags of the stinky plant. I ended my search. What I needed simply did not exist. We hunkered down at home together wondering how much more her little body could take. I wanted her suffering to be over. I gave her my blessing to leave this earth if she so wished.”

But then a marijuana farmer in Colorado, where they lived, agreed to work with the Figis to develop a strain of organic weed with high CBD content. Read about how miraculous the results were for Charlotte in Paige’s moving essay, because I can’t possibly do justice to it with a summary.

But the years of life that CBD bought Charlotte came to an end this week.

“Our entire family had been ill for close to a month starting early March, but did not initially fit all of the criteria for COVID-19 testing,” her mother wrote on Facebook. “For that reason, we were told to self-treat at home unless the symptoms worsened. Charlotte’s symptoms worsened, so she was admitted to the PICU on April 3rd.”

She was treated in the hospital but tested negative for the coronavirus — which doesn’t exactly mean she didn’t have it, as false negatives occur in an estimated 30 percent of cases. As recently as Saturday, however, Paige felt like her daughter would recover, writing, “[S]he didn’t successfully navigate 13 years of Dravet Syndrome and The War on Drugs just to die from a cold. (Kidding this is so far from a cold.)”

Though she was discharged on Sunday, on Tuesday, things took a turn for the worse again. She seized and went into cardiac arrest, and she returned to the hospital once more.

“Her fighting spirit held out as long as it could and she eventually passed in our arms peacefully,” Paige wrote later.

This virus is robbing so many people of the happy endings they were supposed to have. We cannot imagine what Paige, Charlotte’s dad Matt, brother Max and twin sister Chase are  going through, but we’re sending them our love and compassion.