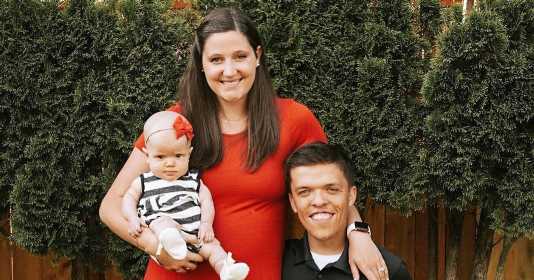 Slamming speculation! Tori Roloff reacted to rumors that she is pregnant with her and Zach Roloff’s third baby.

“I’m not pregnant,” the Little People, Big World star, 29, wrote on her Thursday, October 15, Instagram Story. “The Internet is reaching today. Don’t believe all the garbage you read on the Internet. Must be a slow news day. Or I need to work out more.”

The reality star shares son Jackson, 3, and daughter Lilah, 10 months, with Zach, 30, and exclusively told Us Weekly about their future family plans earlier this month.

The Oregon native said she is “nervous” about conceiving again, explaining, “I want to have the option to have four kids. I don’t ever want it to be really hard for me … so I think giving my body as much time to recover as possible could help that.”

In April 2019, the TLC personalities said that their family was “on God’s timing.” Zach explained at the time: “Right now, we’re just kind of [like], if it happens, it happens. We have plans. We want a family. I would love four or five kids. I want a little pack.”

He and Tori tied the knot in July 2015. While they wait to expand their family, the couple are loving life with Jackson and Lilah.

Their eldest is “pretty good, behavior-wise,” and his little sister is reaching many new milestones. “She’s sitting up now, which is really nice when she wants to,” Tori told Us earlier this month. “She’s kind of a princess. She’s like, ‘I’d rather have somebody hold me up.’ But she’s talking a lot, babbling, loves her brother. She’s moving everywhere. You can’t put her down anymore.”

Zach added that Jackson “has some jealousy” about attention given to Lilah, noting that he’s still “a good big brother.”