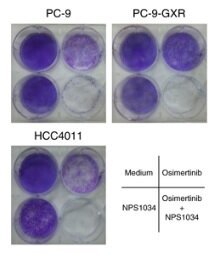 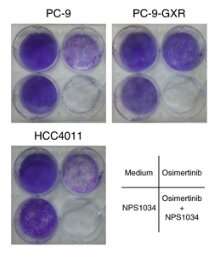 For treating cancer, drugs based on molecules known as tyrosine kinase inhibitors are sometimes used. One such tyrosine kinase inhibitor, called osimertinib, has been used to treat EGFR-mutated lung cancer with a certain degree of efficacy. (EGFR refers to epidermal growth factor receptor, a protein that plays an important role in signaling from the extracellular environment to a cell.) However, in some patients, intrinsic resistance and inadequate response to osimertinib has been observed. Seiji Yano from Kanazawa University and colleagues have now discovered that AXL causes the resistance to osimertinib and the emergence of osimertinib-tolerant cells.

The researchers first showed that in vitro, osimertinib activated AXL in EGFR-mutated lung cancer cells. Then they demonstrated an inverse correlation between AXL and susceptibility to tyrosine kinase inhibitors; AXL expression correlated with a poor response to treatment with osimertinib and with early tumor relapse.

Yano and colleagues checked whether drug-tolerant cells (cells with significantly reduced sensitivity to drugs) exhibited higher levels of AXL. Indeed, tolerant cells were found to display a higher expression of AXL compared to parental cells. Application of an AXL inhibitor called NPS1034 led to a decrease in survival of the drug-tolerant cells.