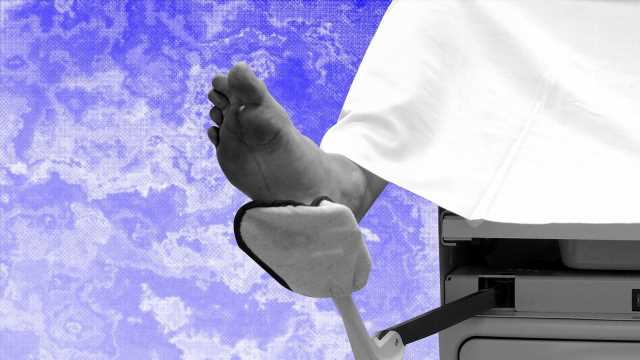 El Sanchez was crying as the nurse held their hand. "I'm sorry," the nurse said. "This is always really hard for women." But at that moment, Sanchez wasn't crying from the emotional consequences of getting an abortion; they were crying because of the physical pain. Soon, Sanchez began bawling. Both the nurse and the doctor performing the procedure continued to misgender them, ignoring their insistence that, really, they were fine, and no, they didn't need their "boyfriend."

This was Sanchez's second abortion, but their first since coming out as nonbinary. "The first time, you know, I didn't get emotional at all," Sanchez tells Allure. "[During my second abortion] the combination of the doctor misgendering me, and then forcing these heterosexual gender roles on me, made me feel even more erased in the situation, and so it became much more emotional for me."

However, they’re not alone in their plight; abortion can be tricky to navigate for anyone, but it presents unique challenges for transgender people who are often erased — both unintentionally and intentionally — from the conversation. The consequences of this can be life-altering. For places where abortion rights are restricted, it can be even harder for transgender individuals to find competent and affirming care.

Katy Leopard, the director for external affairs at the Choices clinic in Memphis, Tennessee has seen how difficult accessing affirmative health care can be first hand, and is doing what she can to help fix these systemic issues. "We have patients who travel hundreds of miles or more to come see us," she tells Allure. "And we have between 250 and 300 trans patients who we see annually for all different things."

"Ultimately, what you're going to have to deal with is that people have ingrained ways of thinking about gender."

For the past few years, Choices has provided a three-part training for medical professionals across Tennessee, Mississippi, and Arkansas. (The program is currently on hold due to the pandemic.) The program, which is led by transgender people in the medical field, teaches medical professionals how to provide competent and affirming care for transgender patients such as using the proper name and pronouns as well as what language to use with respect to a patient's sexual history.

Still, Leopard says, it's not possible to account for everything. "Ultimately, what you're going to have to deal with is that people have ingrained ways of thinking about gender," she says. "And breaking those really old mental models that people have is really hard."

Part of the training, therefore, is not just about teaching medical care providers the language to use with trans patients, but also encouraging them to reckon with their own understanding of gender.

"It's not just enough for us to say you have to do this — wear your [pronoun] buttons — you also have to put HR policies in place that support your values," Leopard says. "We added a whole other section to our [job] application about dealing with transgender patients and people's beliefs and values and feelings around that so new employees are aware that these are the expectations we have."

The complexities of disclosing gender identity with medical practitioners

When Orion Rodriguez had his first abortion, he opted not to disclose his trans identity. "It was definitely not something that I ever brought up with my doctors because it seemed like it was needlessly complicating things," he says.

Since then, Rodriguez has struggled with getting medical professionals to respect and acknowledge his gender identity. Practitioners often use the wrong pronouns when referring to him, and in one case, he was called "young lady" while receiving care even though his medical chart noted that he was trans.

"It's very discouraging to realize, yeah, I was probably right about [not disclosing]," he says. "There was a reason why I just didn't talk to my doctors about [my gender], because if I wasn't receiving medical treatment for it, it's not worth putting up a fight. And I wish that weren't the case."

Sanchez has had a similarly uncomfortable experience with their reproductive health care provider. "They had a Post-it on my file that I could see that literally said, 'Goes by El, is transgender,' on it," they say. "I know they did that to remind themselves about my pronouns but it was awkward to see."

Sanchez says that as uncomfortable as they felt in that situation, they couldn’t imagine how trans men would feel there. "We shouldn't put barriers in place where people don't want to help themselves because they don't want to deal with these other things."

When an abortion leads to an important revelation

Jay Mudridge didn't know they were trans when they had their abortion, but the aftermath was an important part of that discovery.

When they were six months pregnant, they learned their baby had something called a limb-body wall complex. The back of the fetus's head hadn't formed, her spine was at a right angle, and she was missing her left arm. Doctors told Mudridge that the baby wouldn't survive for more than a few minutes outside the womb, and if they tried to deliver naturally, they would likely bleed out.

"There is such a hyperfocus in dominant culture on vilifying trans women that people forget transmasculine folks exist."

"I didn't want the short minutes of life she would have had to be only excruciating pain," Mudridge says. They donated the fetus to research of her condition and began the arduous recovery process. For weeks afterward, they bled, and their chest leaked milk.

"I bound my breasts with Ace bandages for months afterward because the milk had nowhere to go. That's when I learned I liked the way I looked with a flat chest," Mudridge explains. "I saw myself flat-breasted in the mirror and it was like a jolt — a knowing — and I was frightened."

Mudridge doesn't plan to have any more children, but in their other medical experiences since, they've struggled to find affirming care, getting misgendered and having their old name used throughout. "There is such a hyperfocus in dominant culture on vilifying trans women that people forget transmasculine folks exist, and [they] are often overlooked in the area of reproductive health care," they tell Allure.

When the struggle to find affirming care is too great

When abortion — and reproductive health care, more broadly — are framed as exclusively cisgender women's issues, it presents challenges for transgender people trying to get adequate and essential care.

Sanchez has witnessed this dynamic as well, as they've observed many cis women referring to all reproductive health care as "women's health care." This nomenclature, in many ways, erases trans women who don't have uteruses, as well as trans men and non-binary individuals, who require reproductive care but don't identify as women.

"If you're trying to make the conversation neutral, people [think] that you're doing this sexist thing where you're not including women," Sanchez says. "But when we’re talking about these medical things, or equity, we don't want people, including cis women, to be defined by their ability to reproduce or defined by their body parts."

The knowledge that affirming care is hard to find — and having had negative experiences in the past — can influence the decisions people make about their futures. Sanchez got pregnant again, about a year after their second abortion, and weighed the decision of whether or not to have another. "I knew I probably should have," they say. "But I definitely decided not to, largely because I didn't want to go through that again."